Germaine Martha de Randamie is a former kickboxer and a famous Mixed Martial Artist. She has been entitled to the title of being the first UFC Women’s Featherweight Champion. Germaine has got some amazing tattoos on her body. They are known to be very special to her. Let us explore her body tattoos and their meanings. 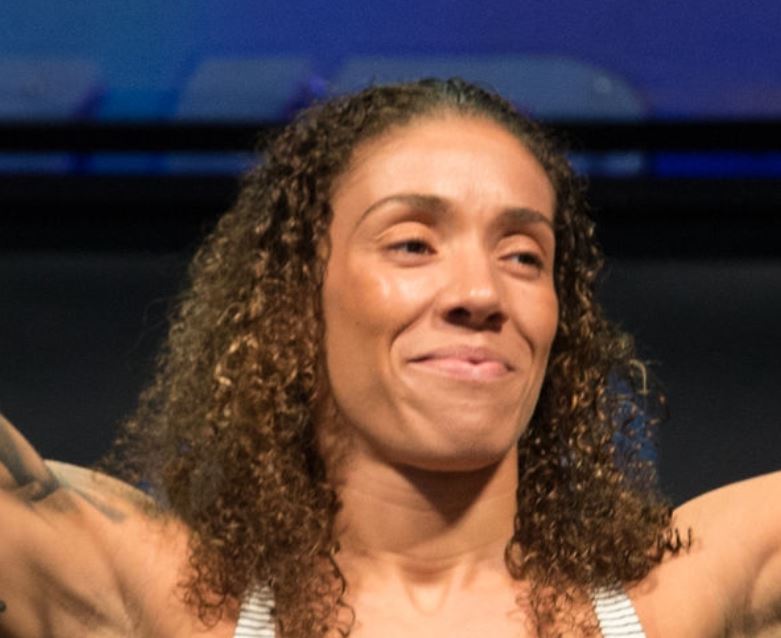 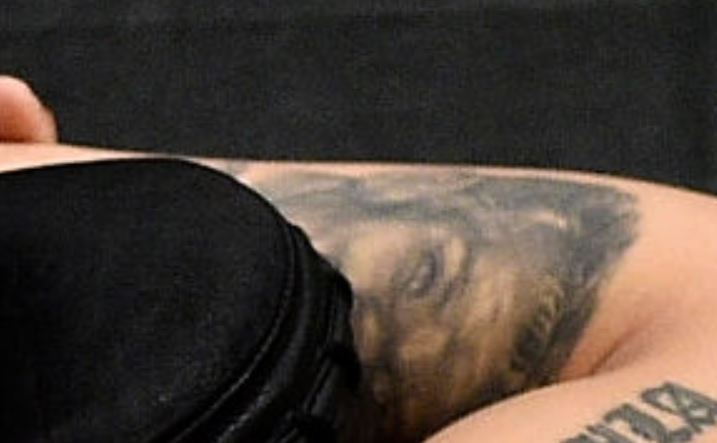 Tattoo: On her left inner arm, Germaine has got a portrait tattooed. Since not much is known about her family and nothing has ever been revealed by her also about the tattoo. However, we believe it to be the portrait of her mother. She had shared a picture with her mother calling her ‘The Iron Lady’. She is known to be too close to her mother. 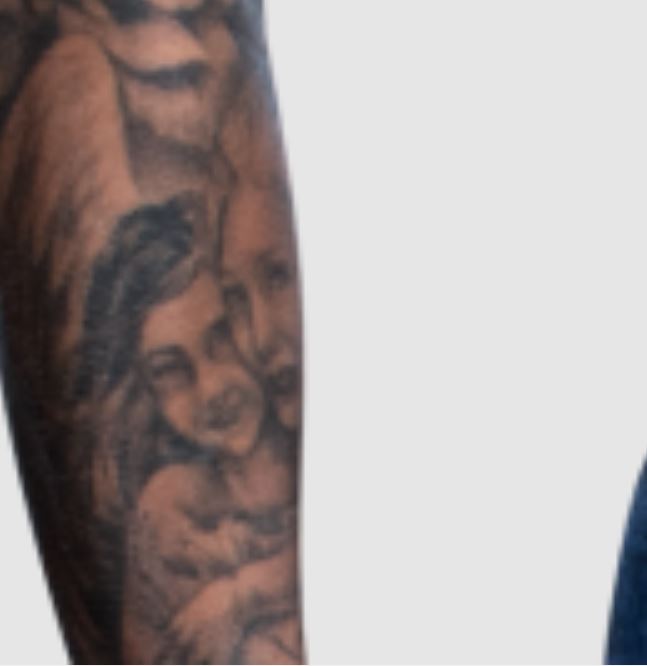 Tattoo: There are two female portraits inked on her right forearm. There is a young girl with angel wings and her mother hugging her in her arms. This tattoo is another representation of Germaine’s love for her mother.

Angel is observed as the messenger of God and also brings good luck.

Roses are the symbol of love, romance, affection, and friendship. It is the universal symbol of passion and love. The five petals of the rose tattoo hold great relevance. As per the Christian belief, the five petals of a red rose symbolize the bloodshed by Jesus Christ on crucifixion for the sake of humanity. Germaine has got multiple rose tattoos on her arm. 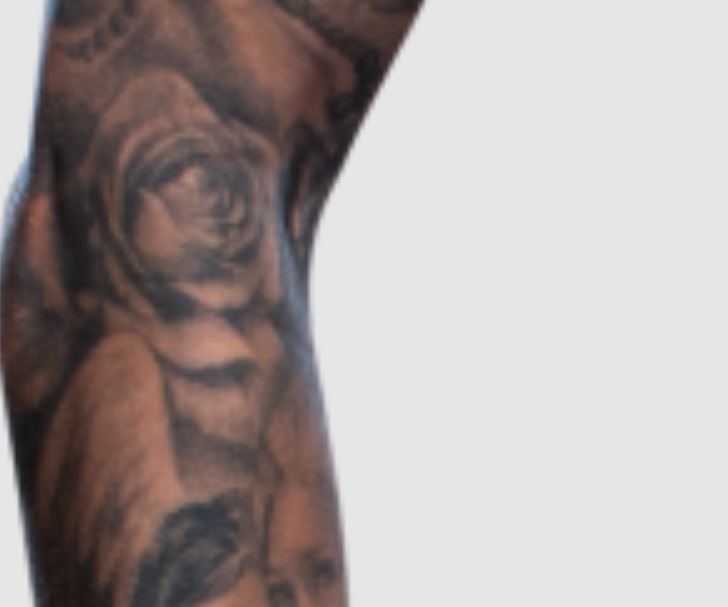 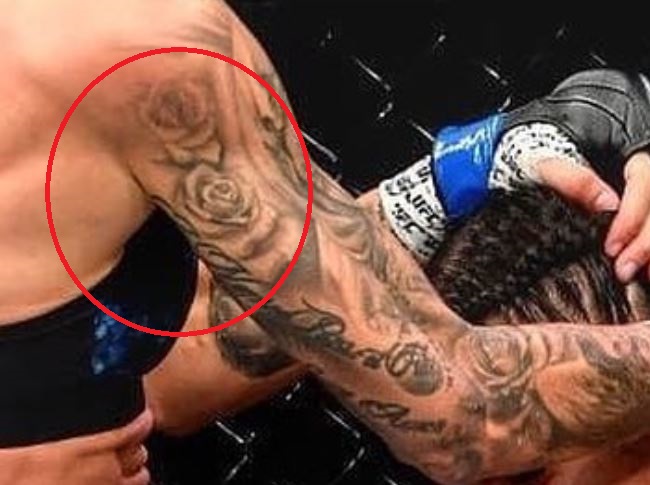 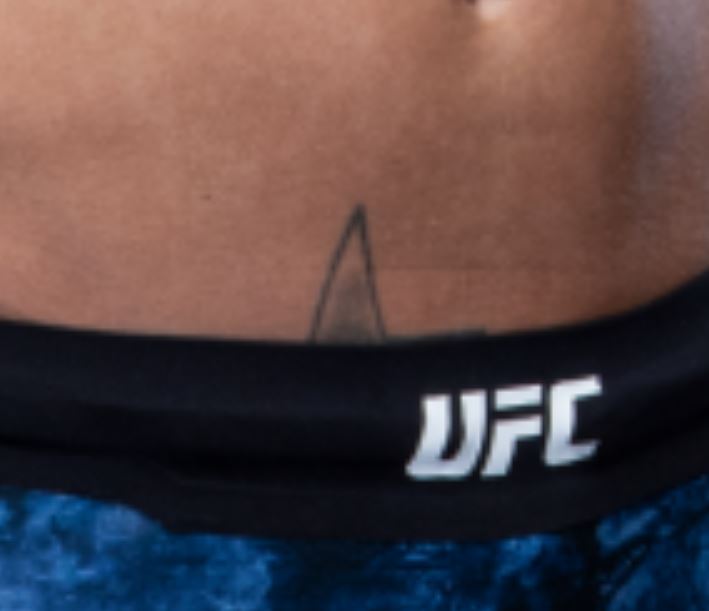 Tattoo: On her abdomen, Germaine has got the tattoo of a five-pointed star.

Meaning: Five-pointed star is the symbol of direction and guidance. It is believed to direct you towards the path of light from the dark phases of your life and helps you lead a happy life. 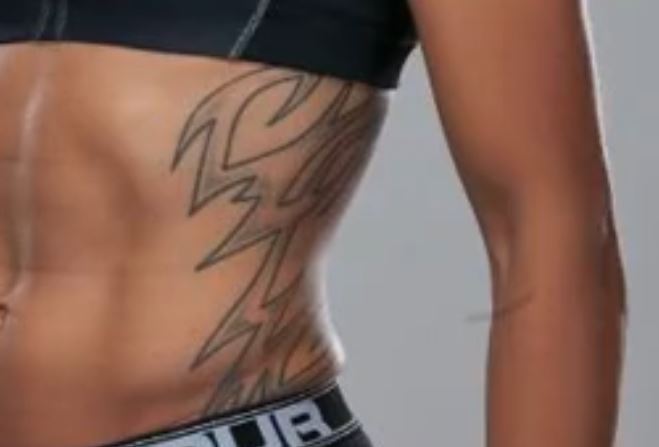 Tattoo: The left side of her body is covered with an intricate tribal design. Tribal tattoos often reflect the importance of the wearer’s rich culture and heritage.

7. ‘Die with Memories not Dreams’ Tattoo 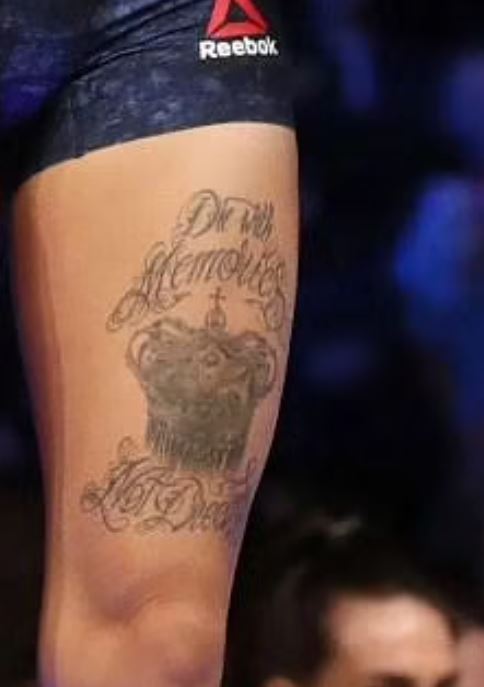 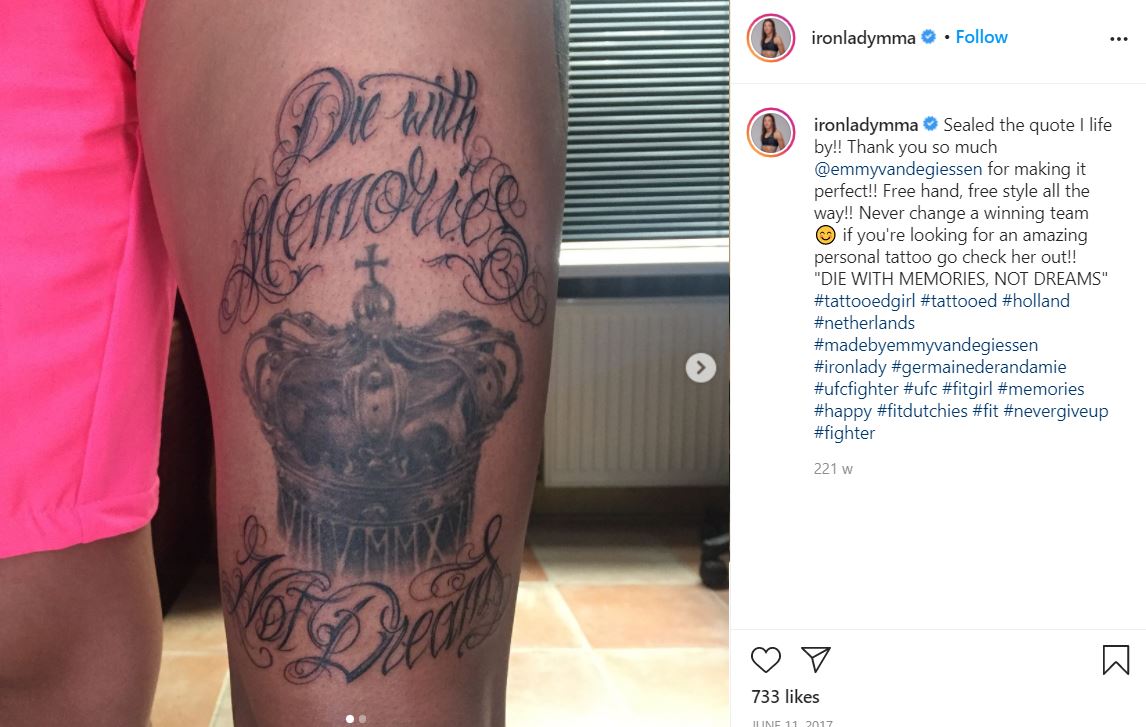 Tattoo: Attaching new words to her victory crown, Germaine has got the following words added to her crown tattoo, ‘Die with Memories, Not Dream’. She had revealed this tattoo via her Instagram handle on June 11, 2017.

Die with memories, not dream is a common quote that stands for the fact that we should turn our dreams into reality and make memories by living up to such dreams rather than dying by keeping those dreams intact. Our life is short and unexpected thus, we should make most of every moment and every dream that we wish to live in our life. Germaine calls it to be her personal mantra of life and has also revealed that it is this personal belief that encouraged her to lead towards the UFC title.

“I say ‘Die with memories, not dreams’, because I’m a believer that nothing is impossible. It’s not going to be an easy road; I will tell you there’s no easy roads in life. But, I hope that I can change one person’s mind and that they can realize, if they really want something, they just gotta fight for it. It won’t come easy, but in the end, it will be worth it. And why not have tried? Some people call it failure. I don’t believe in failure, I believe in lessons. You only have one life, live it to the fullest! Go after your dreams! Go for it! There are people who do believe in you and will support you and will have your back, and that’s where the quote is coming from.” 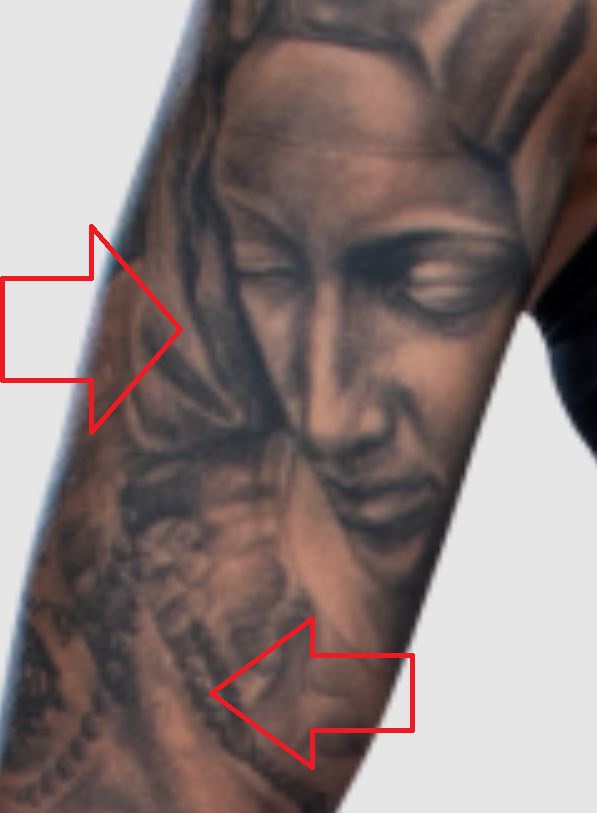 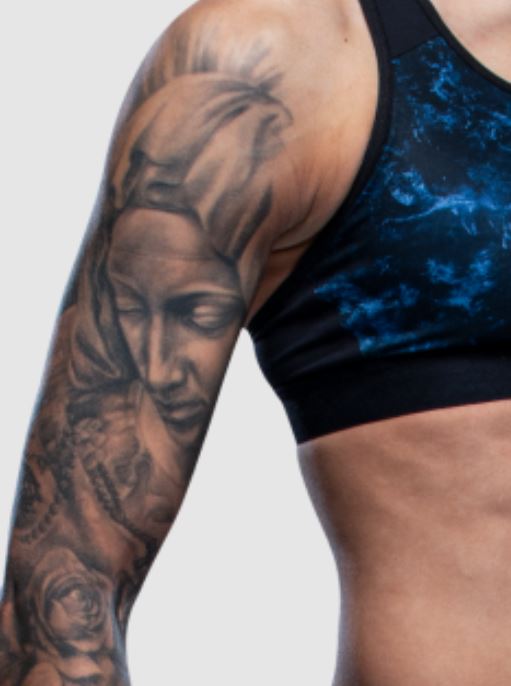 Tattoo: On the upper right arm, Germaine has got the tattoo of the portrait of the Virgin Mary inked along with the praying hands and rosary beads tattoo.

Meaning: Virgin Mary the mother of Jesus Christ is believed to be the universal symbol of heavenly and affectionate motherly love that every child wishes to receive. The tattoo reflects the deep faith of Germaine in Mary’s blessings and her support over her life. Also, the praying hands represent the power of prayer. It shows that Germaine wished to be under Mary’s guidance and love and wishes to remain focused in her life. Rosary Beads themselves represent Virgin Mary, her pureness, and the innocent unconditional love. 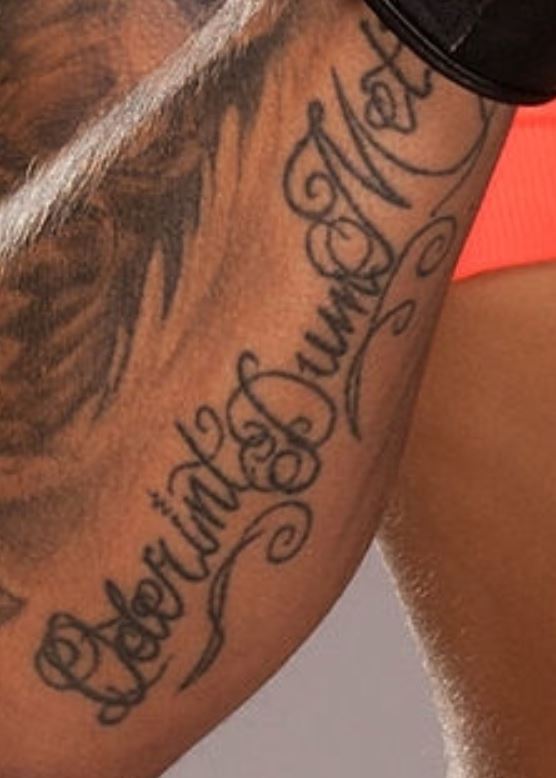 Tattoo: There is a Latin phrase tattooed on Germaine’s right forearm. 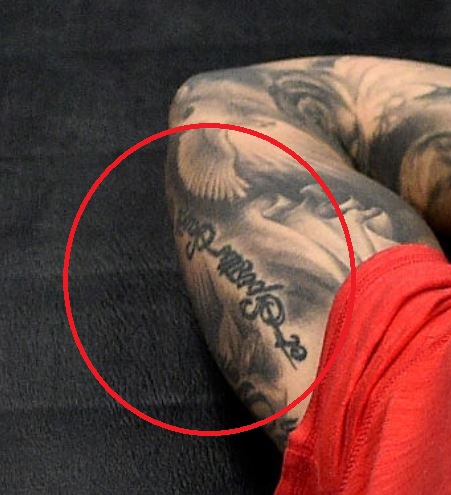 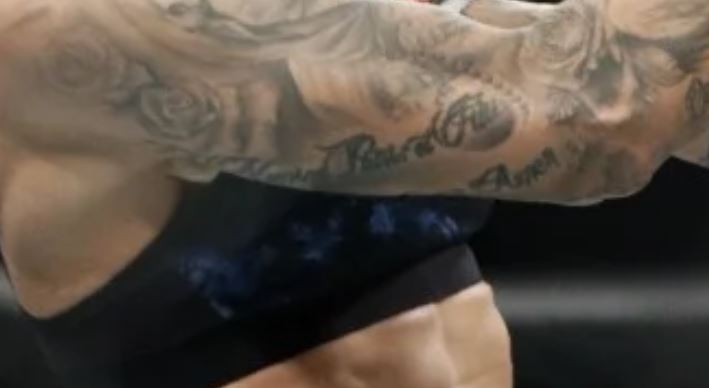 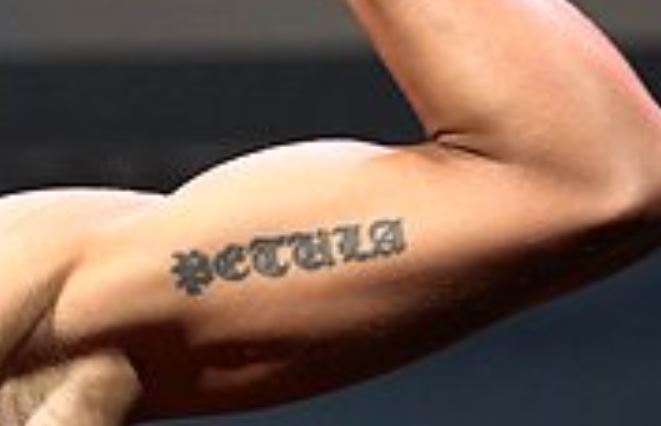 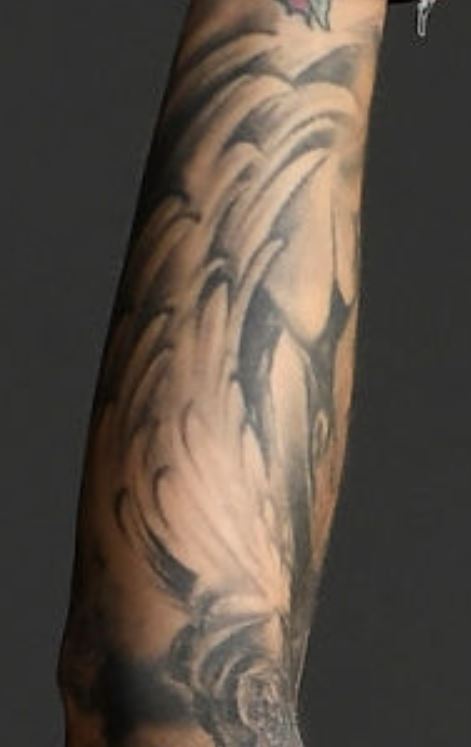 Tattoo: Covering the major portion of her right arm are the wings.

Meaning: Wings symbolize independence and freedom. We know how high-spirited and independent woman Germaine is. The tattoo totally reflects her attitude and personality. Wings are considered to symbolize the wearer’s belief of freeing herself from the regular forceful shackles of society and to fly freely and live following their own rules in their life. 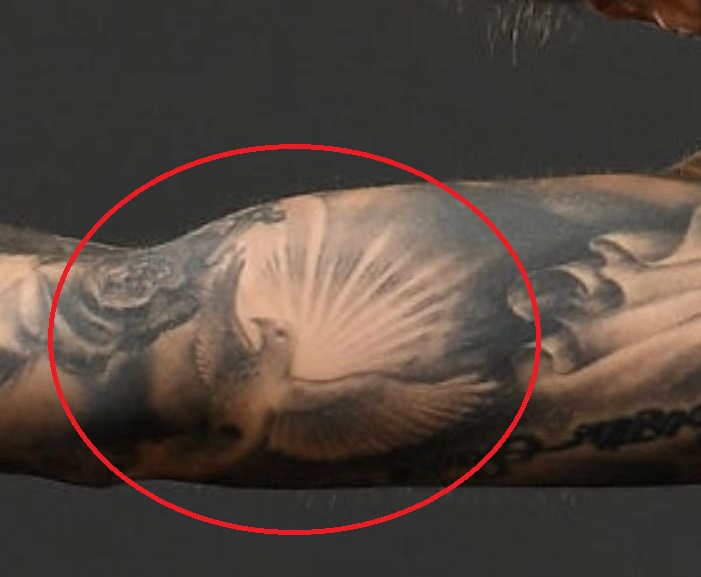 Tattoo: On the inner side of her right arm there is a dove bird with open wings tattooed.

Meaning: The tattoo has been given a very serene look. Dove bird is the purest symbol of victory, god’s will, peace, and love. It is also believed to be the symbol of new beginnings and fresh starts into new phases of life. 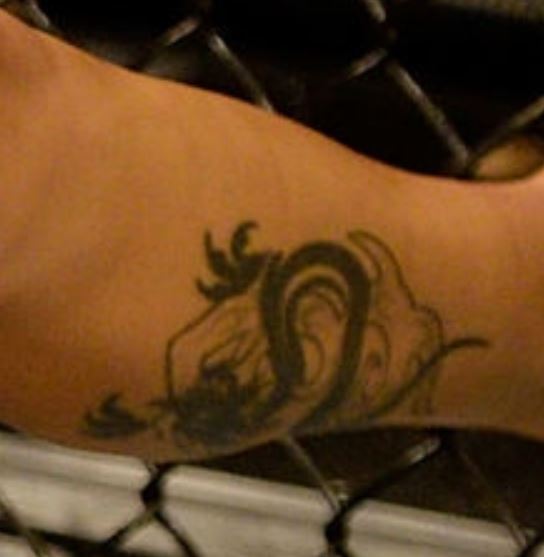 Germaine had revealed this tattoo via her Instagram handle on SEPTEMBER 18, 2016.

Tattoo: There is a beautiful crown tattooed on her left thigh.

Meaning: The crown has got the dates inked on its bottom in roman numerals as, ‘VIII-V-MMXV’. On the top of the crown, there is a small cross inked. She got it inked to mark her victory at UFC, Rotterdam Championshi[p. It was held on 8 May 2016 and this is what the roman numerals convert into. It refers to the date she won the title. The tiny cross symbolizes her strong faith in Jesus Christ and his blessings which ultimately let her win the game. 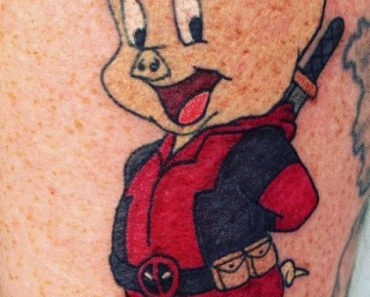 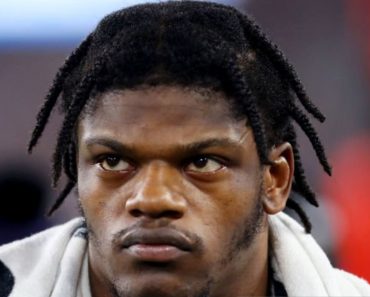 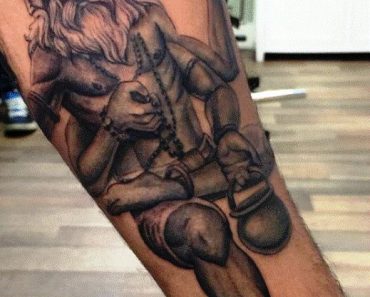 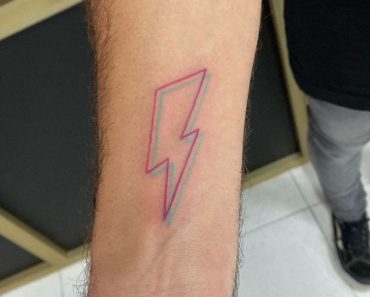 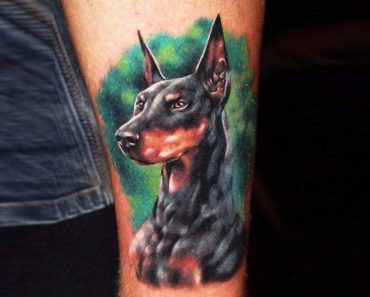