Matthew Polinsky better known by his ring name, Corey Graves, is a retired professional wrestler. Besides, he is an American wrestling color commentator, podcaster, and also a columnist. He debuted in 2000 under the ring name Sterling James Keenan. Corey is working as the commentator and analyst with WWE for the series Friday Night SmackDown. Corey has a huge number of body tattoos which is enough for us to know that he a crazy tattoo lover. He got his first tattoo done at the age of merely 18 years, can you imagine that? Let us see what stories does he hold behind getting each of his tattoo that exists on his body. 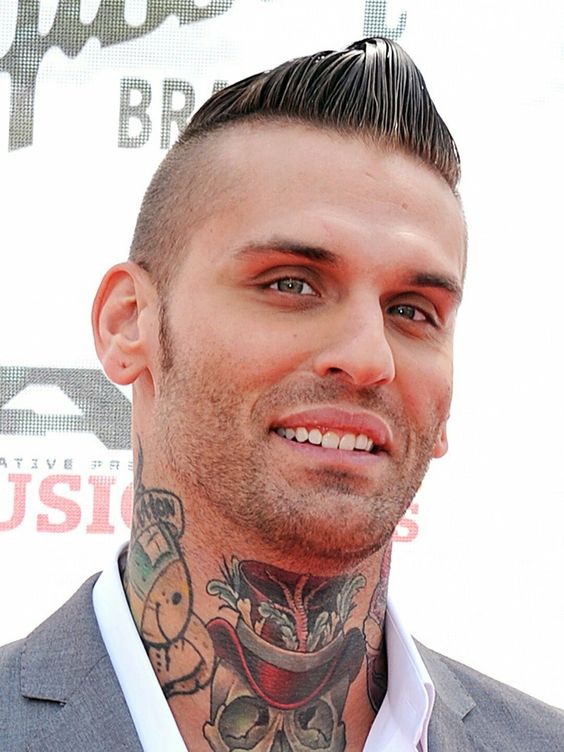 “Me and my homey were drinking with some lady, but she spiked our drink and stole our wallets! We were broke and had no money, stuck in the worst part of the city. Luckily for us, we found a cab driver who was also a tattoo apprentice, so we exchanged a ride to safety for a pair of arms to practice on. After I sobered up, I realized that tattoo dude spelled Hulk Hogan, Ho Kogan!”

Tattoo: Across his knuckles, Corey has got the tattoo that says, ‘STAY DOWN’.

Meaning: Corey calls this tattoo to be his trademark.

“There is a tattoo on my knuckles that says, ‘STAY DOWN’, it kinda became my trademark when I was wrestling seems kind of obvious that he hit someone in the face that you want him to stay down but that’s kind of what I became notorious for in the wrestling world.” 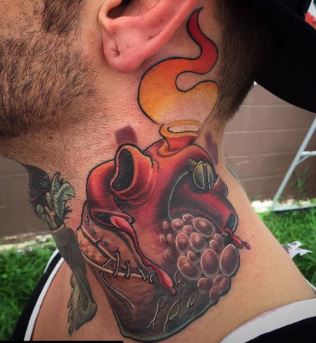 Tattoo: On the side of his neck Corey has got the heart inked. Heart with burning flames. He calls it the Sacred Heart Tattoo.

Meaning: Sacred Heart tattoo is the religious tattoo that symbolizes the religious faith of the person for Christianity. The flames around the heart represent the sacrifice and pain of Jesus Christ whereas the heart itself is the symbol of Jesus’ divine love. This tattoo is way to close to Corey’s heart and also a continuous source of encouragement whenever he falls down or loses in-game, he known how to gather his pieces and stand strongest, always.

“The one tattoo which means so much to me is the heart on my neck. It is actually a Sacred Heart tattoo with the flames that are not done yet. It shows a broken heart whose pieces have been put together. It actually showcases my wrestling career where I have lost and fallen many times and have been hit too. But, just like this heart I have also collaborated and collected my pieces together and become strongest.”

Tattoo: On the center of his neck there is a skull inked which can be seen wearing a hat.

Meaning: Skull tattoo being the symbol of evil and death when added by the hat is actually used as the symbol of style and fashion by many, however, Corey got it to mark the incidence of bad luck in his life. Especially the one where he suffered an injury during Wrestlemania in New Orleans.

“On my neck is the tattoo which is the prince of bad luck because I suffered my injury when I was in Wolens when I was in town for WrestleMania and go to New Orleans I figured that there is some better of taking ownership with something like a tattoo that has happened in Life.” 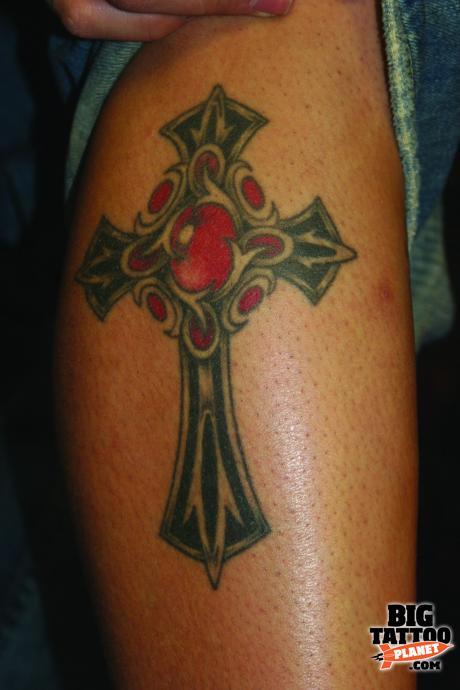 Tattoo: There is a huge cross inked on his right leg.

Meaning: Cross is the symbol that reflects the religious beliefs and faith of Corey i.e. Christianity. However, talking about the time Corey said that he got this tattoo at the age of 15 years. It was his first tattoo and he got it as it was used as a bargaining tool by his parents in order to help him improve his grades.

“I had very poor grades when i was 15 and my father told me if I improved my grades I will; let you get a tattoo and so I worked and my grades got better, and, So I have a cross on my right leg. That was my first tattoo.” 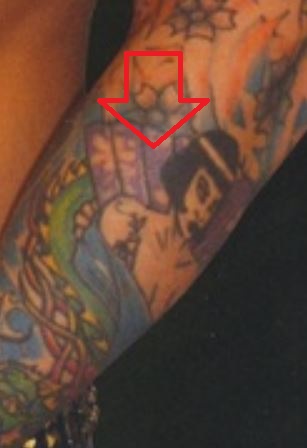 Tattoo: On his left forearm there is a beautiful tattoo of a Geisha girl.

Meaning: Geisha tattoos are the best way to reflect Japanese culture and tradition. They symbolize the beauty and intelligence of the woman. This tattoo is part of Corey’s idea of getting a Japanese theme tattooed on his left arm. 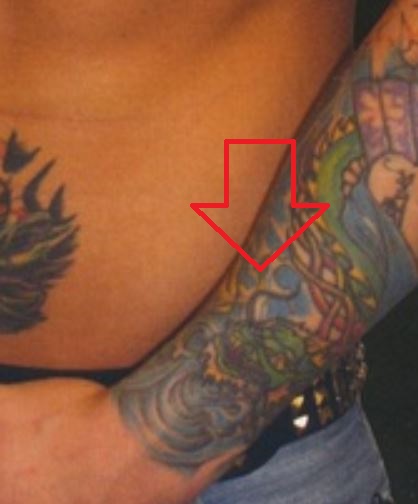 Tattoo: There is a big blue-colored Koi Fish tattooed on Corey’s left forearm.

Meaning: Koi Fish is another aspect of Japanese culture and is the symbol of good luck, strength. and determination.

Tattoo: On Corey left bicep there is an artistic tattoo of a samurai.

Meaning: He got this tattoo inked from the tattoo artist named Brwon. Again, this tattoo is another part of his Japanese theme art that can be seen on his left arm. Samurai tattoo itself represents the attributes of the samurai apart from reflecting and symbolizing the strength and courage.

Tattoo: There is a huge devil face inked on Corey’s right arm.

Meaning: Devil tattoo is the symbol of evil and death. However, the tattoo reflects that each individual has a devil and a darker side of how positive and nice he may be. 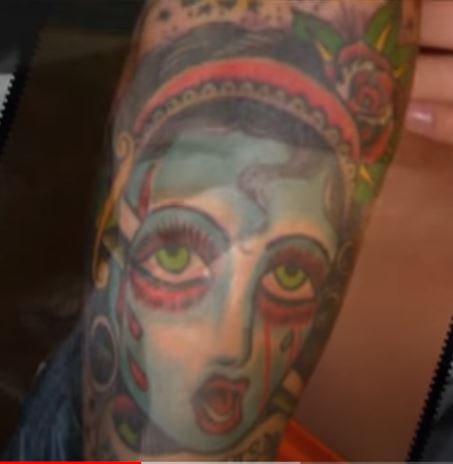 Tattoo: On his right arm there is a portrait of dead girl inked which also carries the lines along with it that says, ‘Pretty Girls, make grave’.

“This is one of the tattoo which nobody actually gets. It says Pretty girls make graves. This means girls are trouble and I have lots of experience for that. Kevin, the boss of the shop I worked at did this. I respect girls but this is very meaningful to me than anyone else.”

Tattoo: On Corey’s right shoulder he has got a huge Luchador mask inked.

“There is a story behind its tattoo, when I was working in a tattoo shop there was this guy who had this design and when He knew that I was from WWE he convinced me for weeks to get it on my body. When I said it would be a small one he again convinced me for a bigger one when he saw my vacant arm and thus, I do not greet it anyhow.”

11. Tribute to Russian Parentage on the right leg 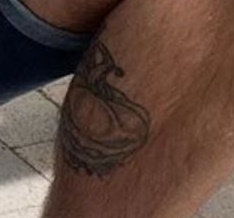 Tattoo: On his left Corey has got a huge pumpkin tattooed. It was a tattoo which he got just because his friend wanted him to have it. 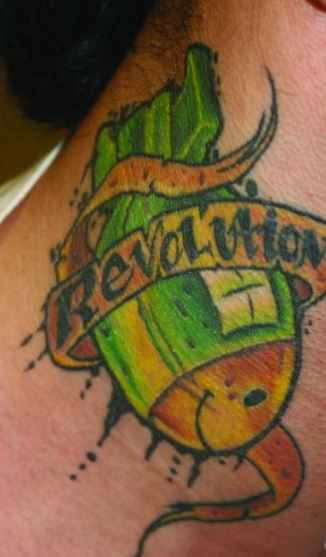 Tattoo: On the right side of his neck Corey has a revolution bomb inked.

Meet the new woman in my life. Thanks to Jim @jegalloway72 at Atomic Tattoo!#AlwaysAndNever#StayDown pic.twitter.com/4rXGMLmWqf

Tattoo: On his left hand there is a colorful mask inked. Corey got this tattoo done from the tattoo artist, James Galloway, Atomic Studio. 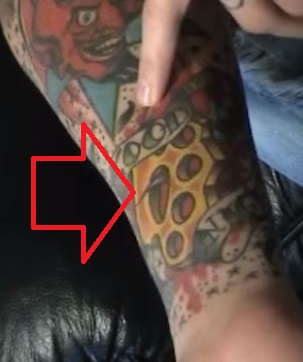 Tattoo: On his right inner arm Corey has a tattoo of the brass knuckles inked. It also contains the words, ‘Good Night’ inked on the top and below of the knuckles, simultaneously.

Meaning: Brass knuckles are used as the symbol of self-defense. However, their tattoos on the body depict the person’s bravery and courage to defend themselves against any danger. 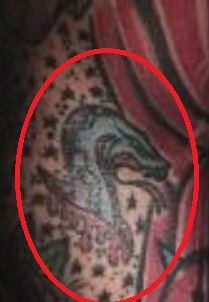 Tattoo: Corey’s right inner arm is inked with the blue colored water dragon. Again, the dragon tattoo has been used by Corey o symbolize his courage, spirit, and strength. 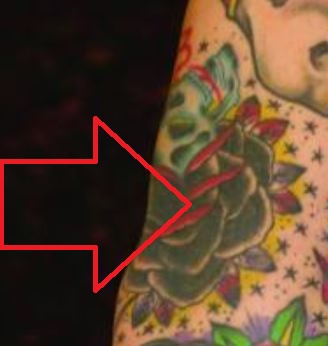 Tattoo: There is a beautiful green colored rose inked on Corey’s right bicep.

Meaning: Lotus is the symbol of beauty and pureness. However, they also symbolize the enlightenment of one’s soul and spiritual awakening. 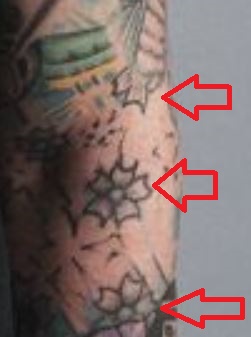 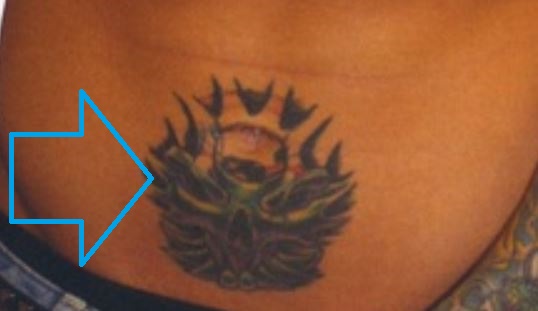 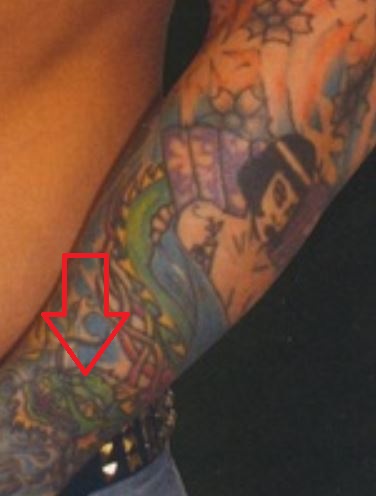 Tattoo: On his left forearm we can see the Japanese dragon tattoo wrapped around his arm.

Meaning: Japanese dragon is used as the symbol of good luck. Also, it reflects the Japanese culture which talks about balance, freedom, and good luck. People wear such tattoos to represent their well balanced and happy life.  It also is known to have supernatural powers and wisdom. 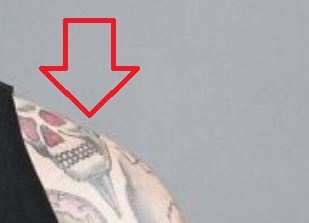 Meaning: Sugar skulls are used as the way of reminding oneself that our late loved ones are living at peace in heaven. 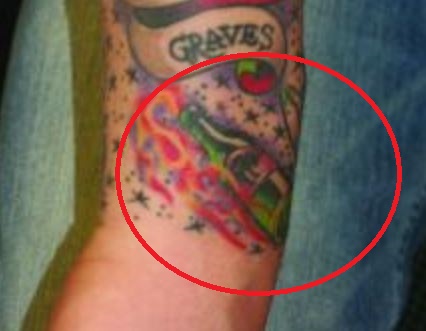 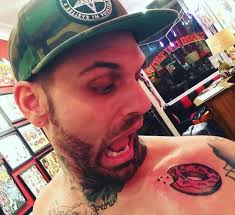 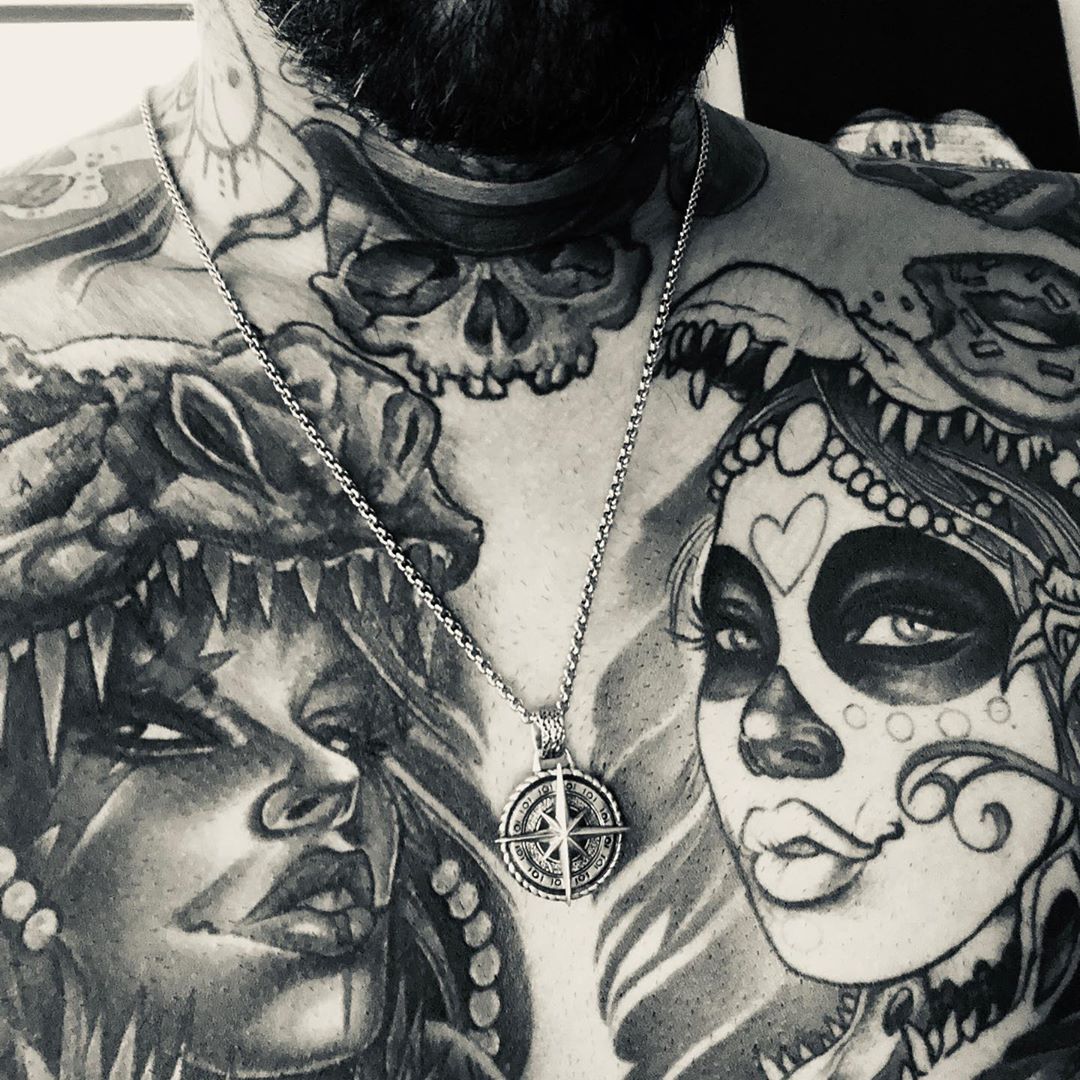 There is a face of a cartoon character inked on Corey’s left hand followed by the year 2004. 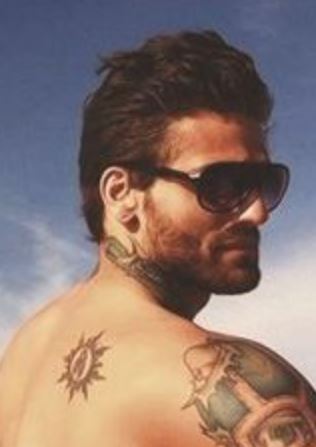 Tattoo: On Corey’s back there is a tribal sun inked with the letter ‘A’ inked inside it.