Donte Rakeem Moncrief also known as Donte Moncrief, is an American football free-agent who plays at the wide receiver position. During his college, he played college football at Ole Miss and was later drafted by the Indianapolis Colts in the third round of the 2014 NFL Draft. Donte, just like other footballers has got multiple tattoos done on his body to mark important memories of his life. Additionally, many of them are religious inks too. Let us see what tattoos he has on his body. 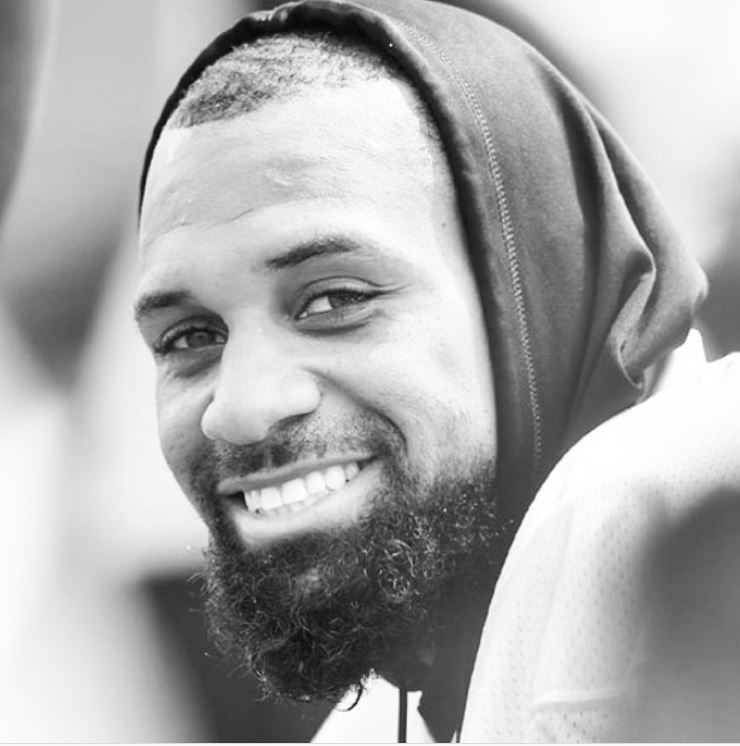 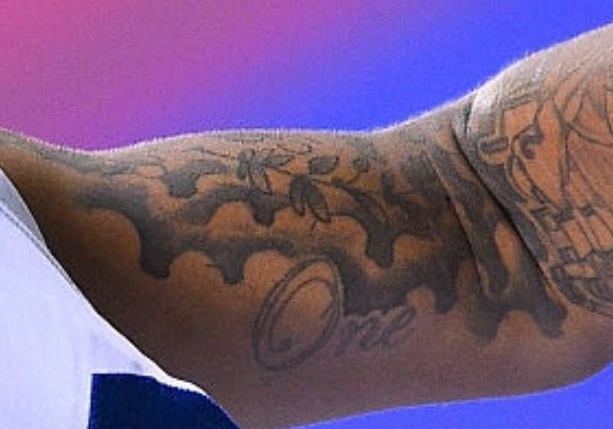 Tattoo: Donte’s left bicep is covered with some dark shaded asymmetrical patterns along with the stems and bushes. 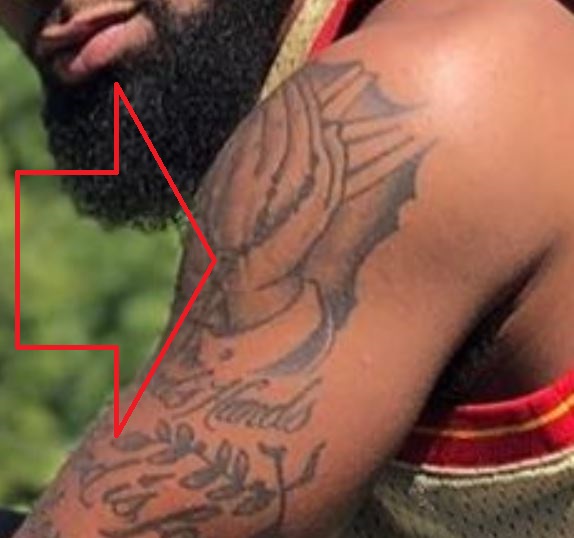 Tattoo: On his left shoulder there is a tattoo of praying hands inked along with the words, ‘Praying Hands’ tattooed underside it.

Meaning: Praying hands are the most common way among people, especially the Christians, used as a holy symbol to remember Jesus Christ and seek his blessings. The tattoo tells us about Donte’s religious beliefs i.e. ‘Christianity’. However, some people also get a pair of praying hands tattooed as a way of showing their dedication and respect for themselves, their family, and near ones. Donte’s tattoo not only includes the drawing of praying hands but also the text, ‘Praying Hands’. 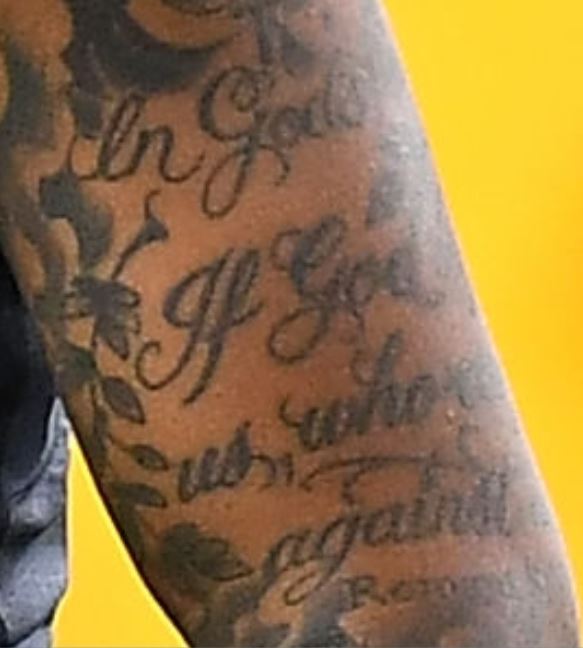 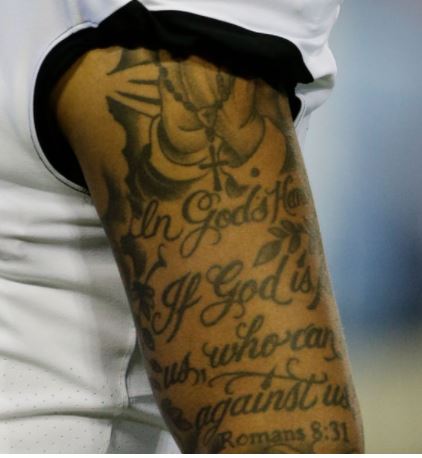 Tattoo: Monte’s has got another religious tattoo done on his bicep. The lines have been taken from The Bible (Romans 8:31) which says “In God’s Hands If God is for us, who can be against us?”

Meaning: The reference as taken from The Bible means that in our life, God is always with us be it our worries, sorrows, or happiness, and thus If God is with us, it should hardly matter if any other person is there with us or not because God is supreme and nothing should matter more than Him. 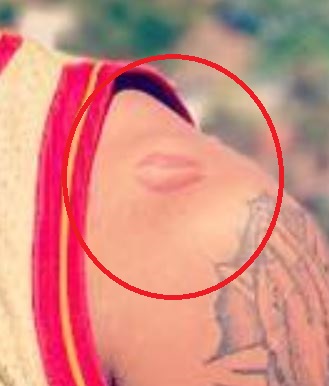 Tattoo: On his left shoulder blade we can see the tattoo of red lips inked.

Meaning: Red Lips are the most common way of memorizing your intimate moments with your lover. 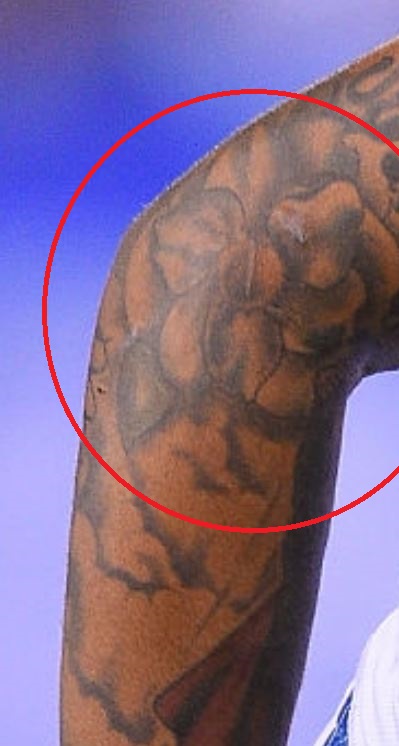 Meaning: Roses are the symbol of love, intimacy, romance and affection. 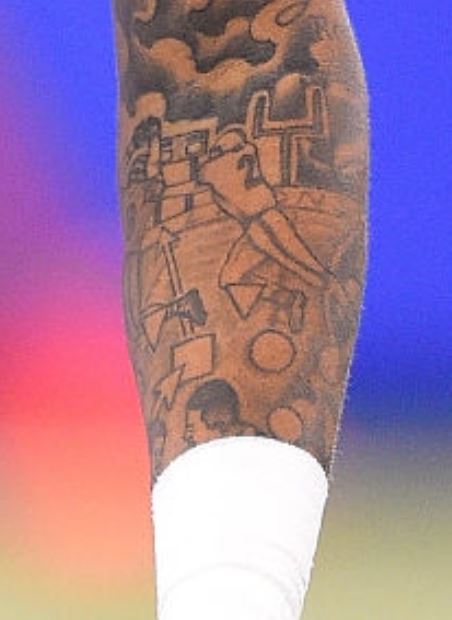 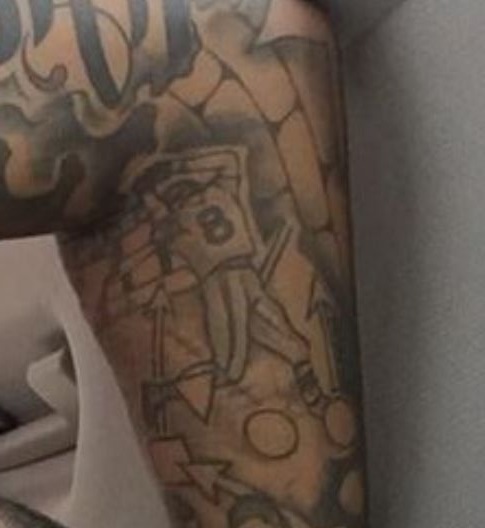 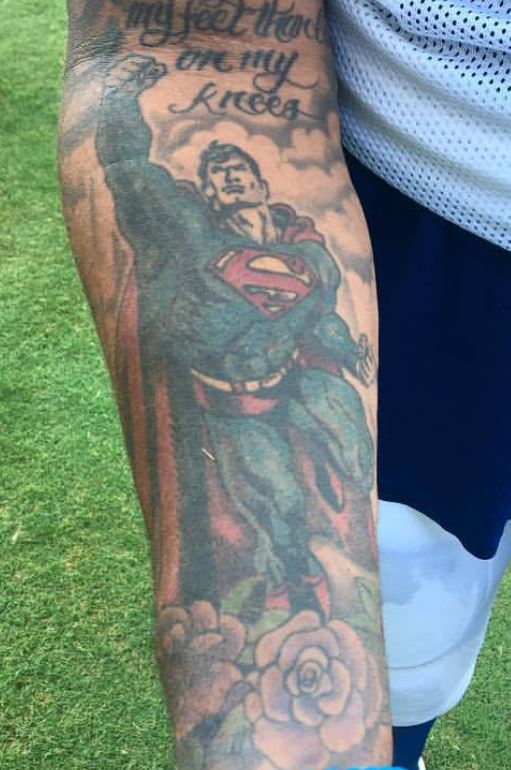 Tattoo: On the inner side of his right forearm, Donte has got a big spider-man tattoo. The tattoo also contains few red-colored flowers on the bottom.

Meaning: Donte is very close to his daughter and he got this super-man comic character’s tattoo inked on his body for the sake of his daughter’s love for the character. It took him seven long hours to get the tattoo done however, Donte claims that the pain he had to endure was worth it. His idea to get the spider-man tattoo was to regard himself as the hero of his daughter’s life. 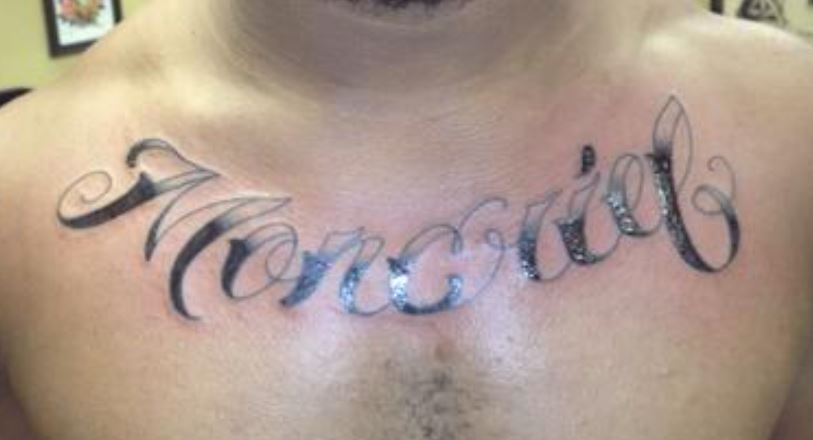 Tattoo: Donte has got his own surname tattooed on his chest as, ‘Moncrief’. 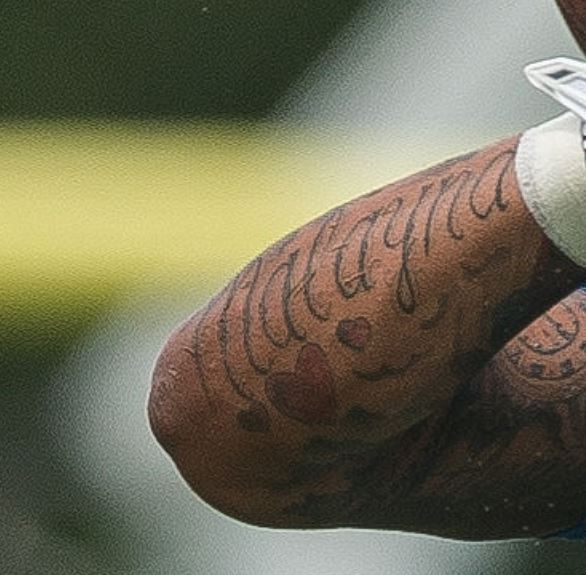 Tattoo: On the outer side of his right forearm there is a name tattooed as ‘Malayna’.

Meaning: Malayna is the name of Donte’s daughter. 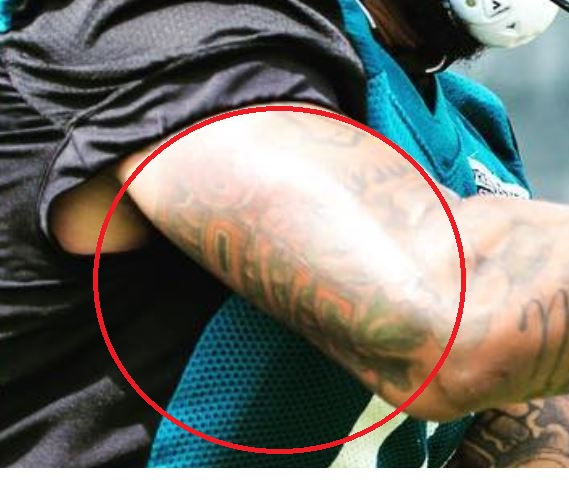 Tattoo: On the outer side of his right bicep, Donte has got the word ‘Love’ inked in red color. 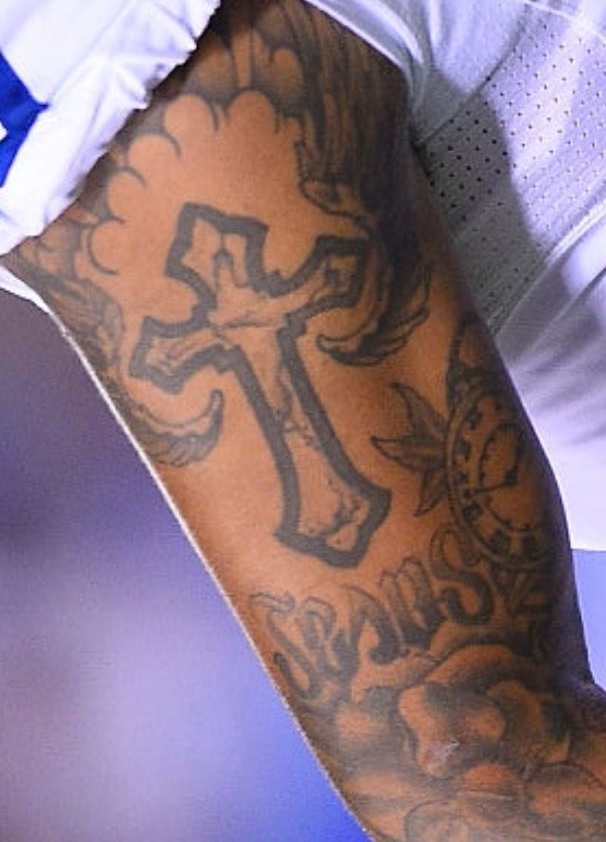 Tattoo: We can a huge cross along with angel wings tattooed on Donte’s right bicep. The angel wings surround the cross that is inked on the top of his bicep. Additionally, we can also see ‘JESUS’ tattooed below the cross.

Meaning: Cross with angel wings symbolizes that the person is highly religious and is a perfect follower of Christianity. However, people also get cross with angel wings inked as the way of paying tribute to the near pone who is no more alive. ‘JESUS’ tattoo is another proof that Donte has strong faith in Jesus Christ and his blessings. 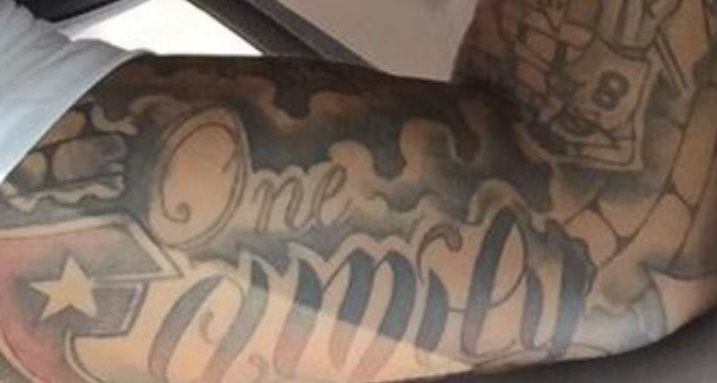 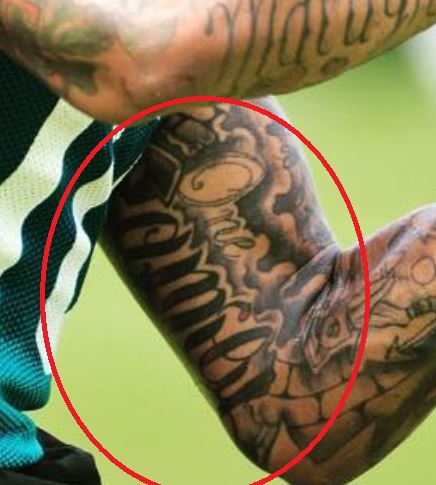 Tattoo: ‘One Family’ tattooed on the inner side of his left bicep. The tattoo is dedicated to his family. Donte is known to be a family person and he himself claims that nothing is important to him more than his family. Donte has two daughters with whom he shares a very beautiful bond. 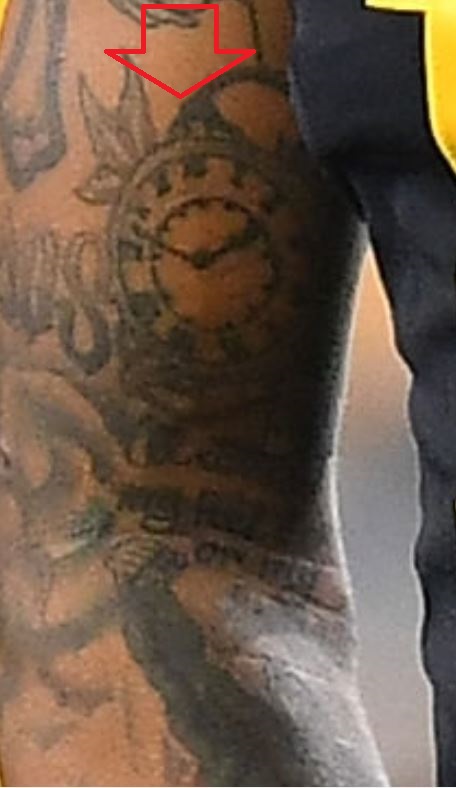 Tattoo: On his inner right bicep we can see a clock inked.

Meaning: Clock is the way of memorizing the death of some close one or it can also be used to mark some beautiful memory in terms of time. Clock itself is the symbol of life and death. 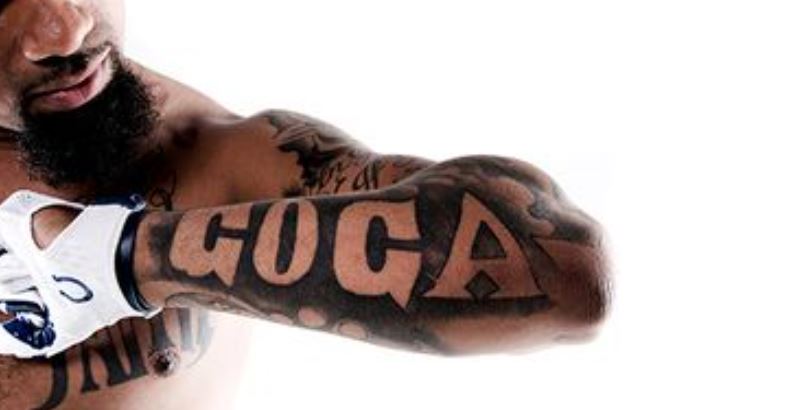 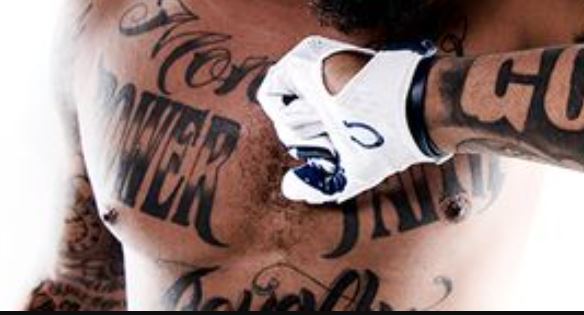 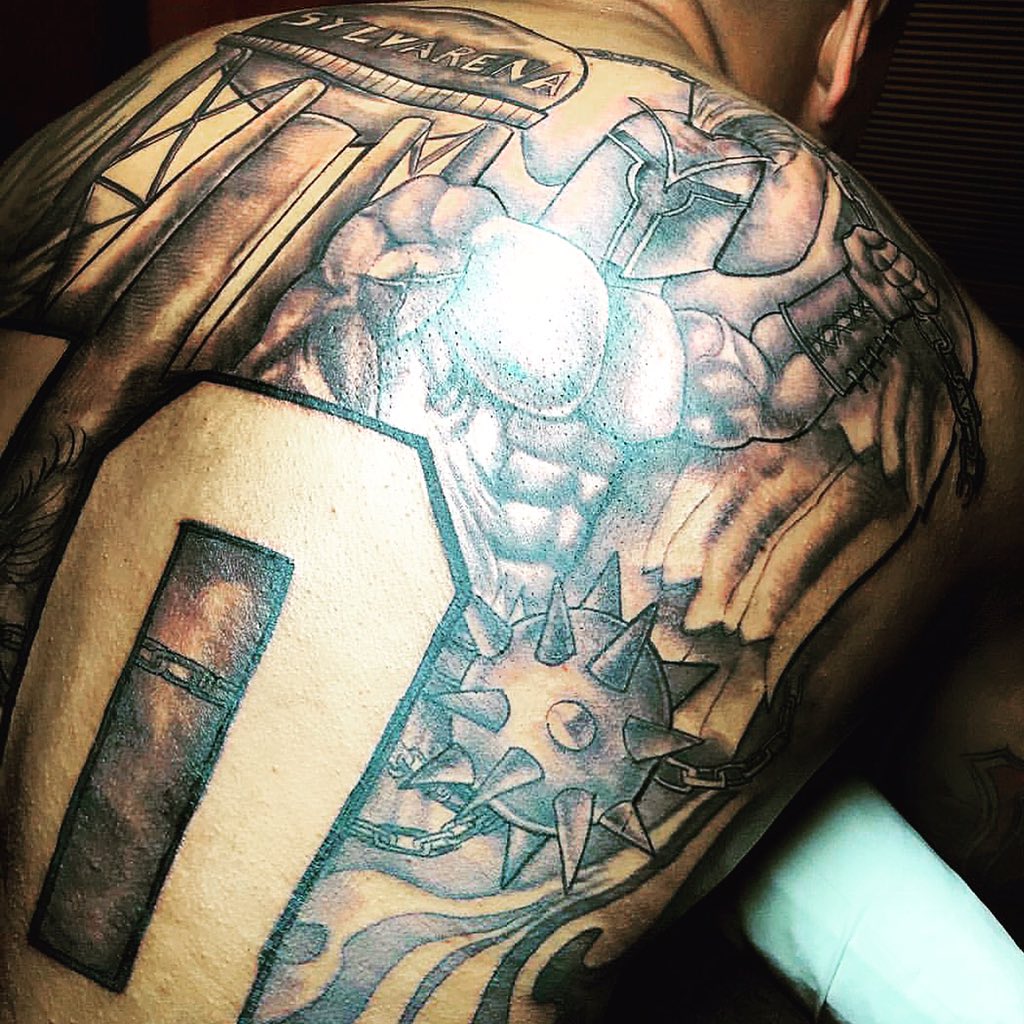 Donte has never really talked about his back tattoo and neither pictures have ever been revealed however, in one of his posts on his Instagram, a part of his tattoo could be seen where he has his daughter lying on his back. 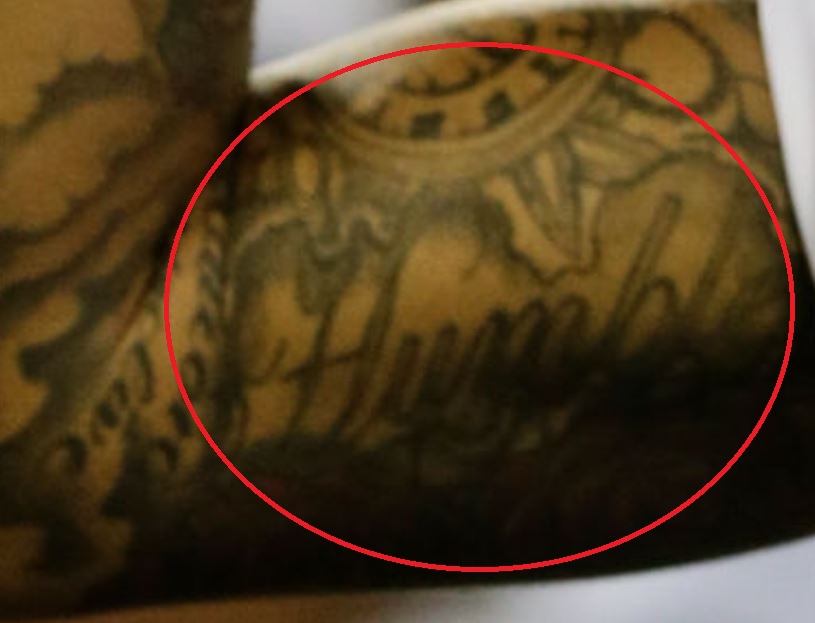 Tattoo: On the inner right bicep we can see the tattoo of the word, ‘Humble’ inked. Humble itself describes Donte’s personality as, he is famous among his companions as a quiet, honest, and sincere person. 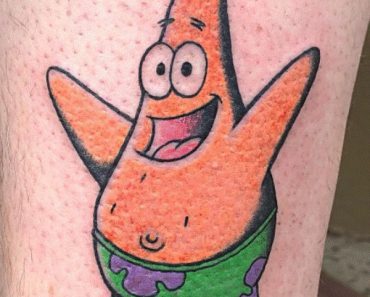