Ivy Lebelle is a Southern California native who was brought up by a Texan mother and an Italian father. Poison Ivy, the primary female member of The Cramps, inspired her stage name, “Ivy.” Ivy is a well-known name in the adult world, having progressed from a make-up artist to adult entertainment in less than a year. This article discusses her numerous body tattoos and the little-known stories behind each one. 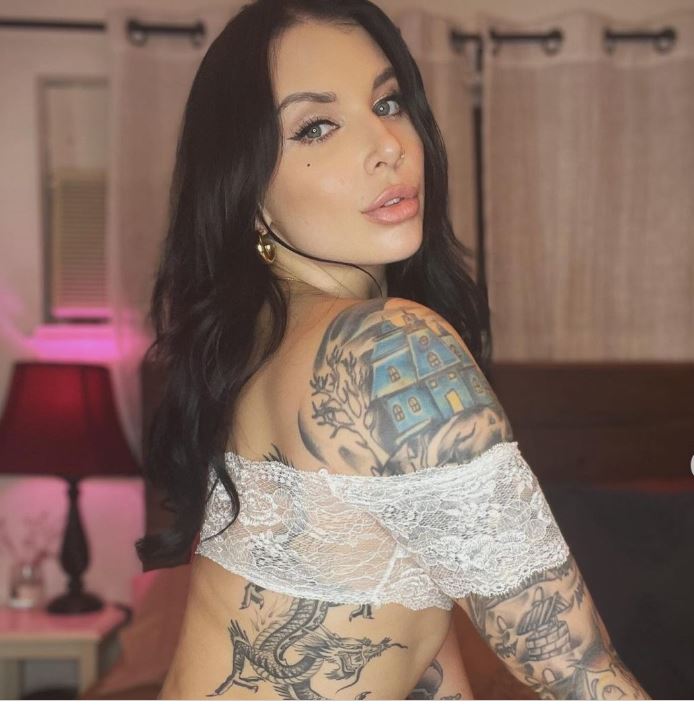 “There is a tattoo artist I’m obsessed with, her name is Johnny Gloom. It’s actually a girl. She has a really cool style. If I was going to get any more, I’d get tattooed by her. But I have no future plans for any tattoos.” 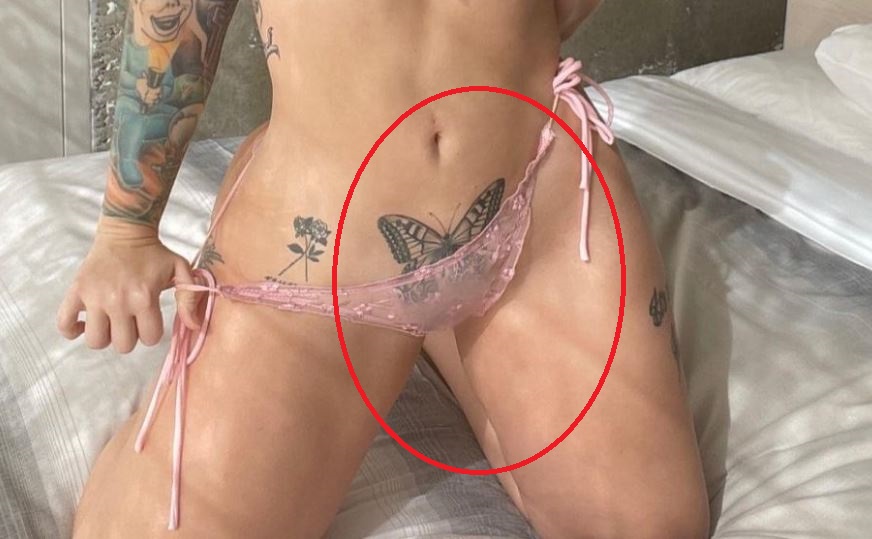 Tattoo: Ivy’s abdomen is covered with a beautiful butterfly tattoo.

Meaning: The butterfly is frequently seen as a sign of elegance, regeneration, and good fortune. Others believe that butterfly tattoos have a romantic significance since they might signify young love. This distinct connotation stems from the fact that, just as butterflies fly among flowers, so do young people with their social life who hover around to look for sweet/loved ones.

Butterflies are also associated with longevity, joy, elegance, and summer, as per the beliefs of the Chinese culture. 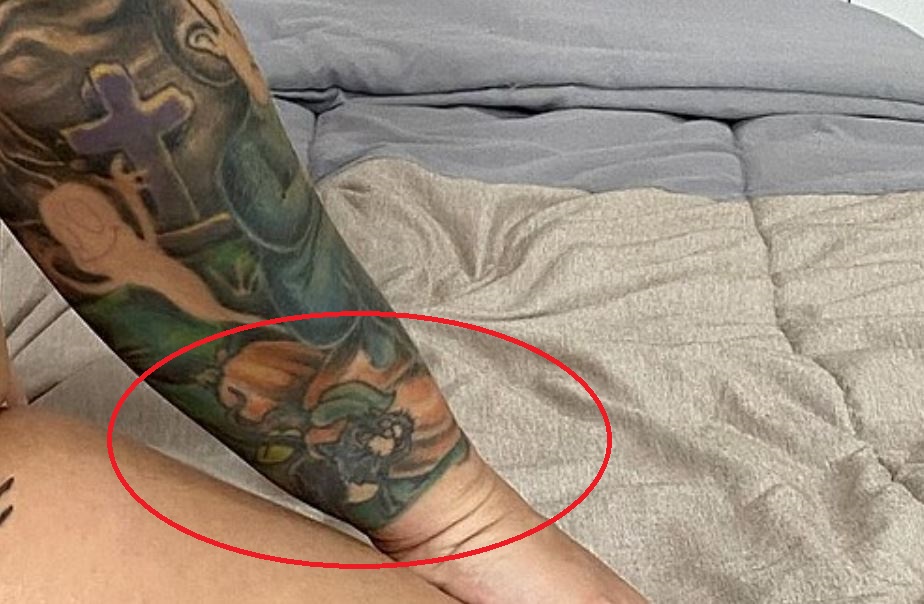 Tattoo: On her left wrist, Ivy has got a tattoo of a grey-colored tomcat.

Meaning: Cats are the perfect symbol of resilience. There’s a reason cats are said to have nine lives. It’s because cats signify perseverance, and many people prefer to have a cat tattoo, particularly the cats’ paws, tails, or even the famous tom cat from the cartoon series Tom and Jerry since it represents life after death and good fortune.

3. Dragon Tattoo-Right Side of Body 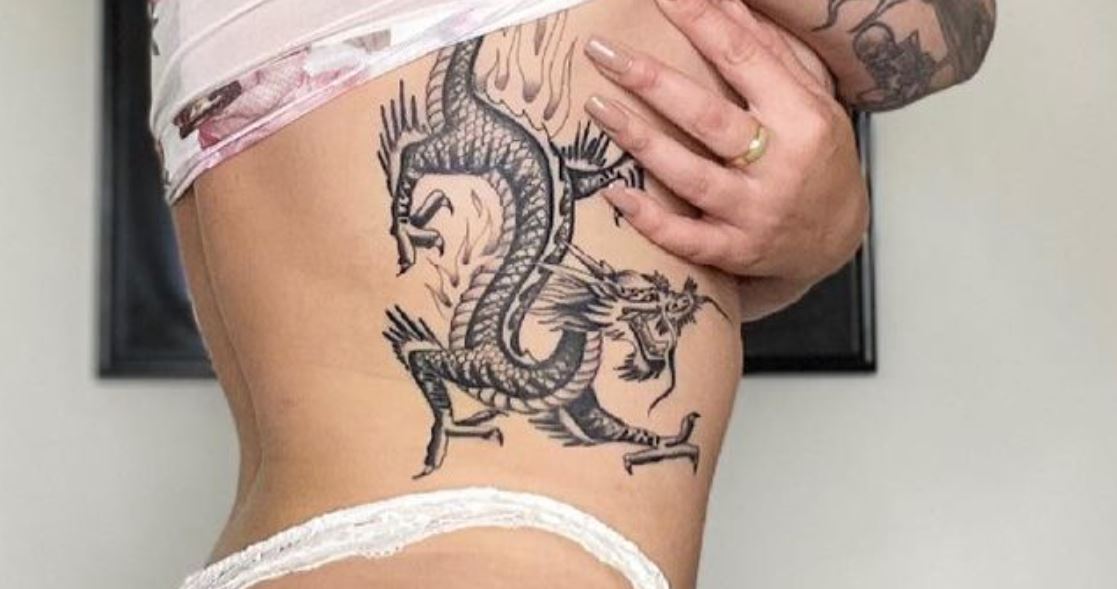 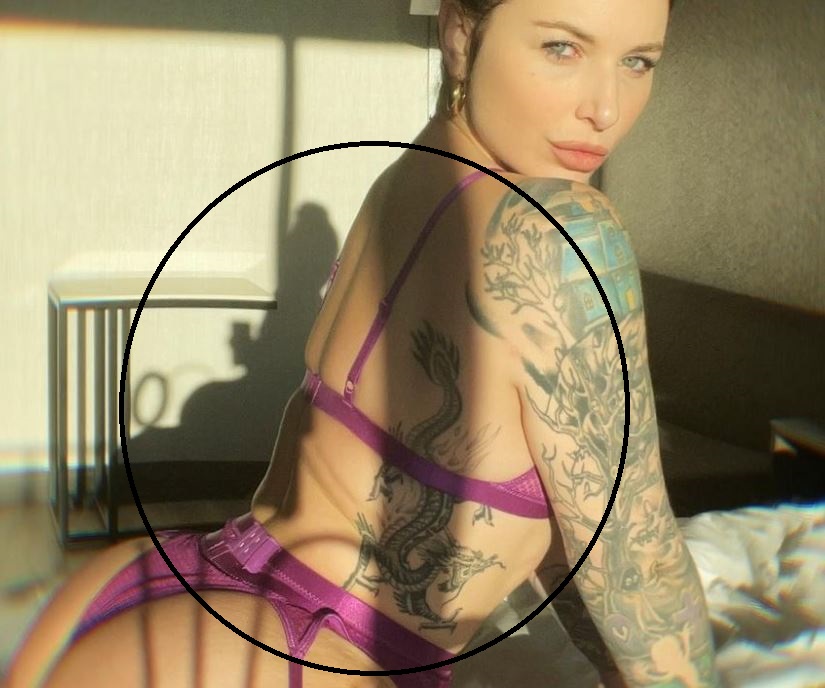 Tattoo: There is a huge dragon that covers the major portion of the right side of her body. 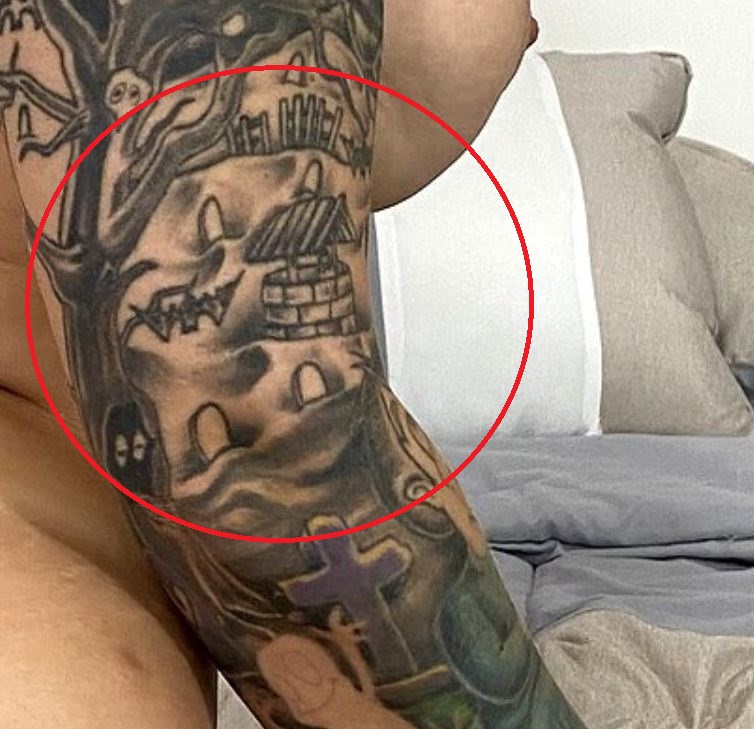 Tattoo: In an interview, Ivy had revealed her un que love and attraction for  he weird, scary, and uncanny things like graveyards, Halloween, ghosts, and skull like stuff. This is another of her body tattoos that proves her love for the same. 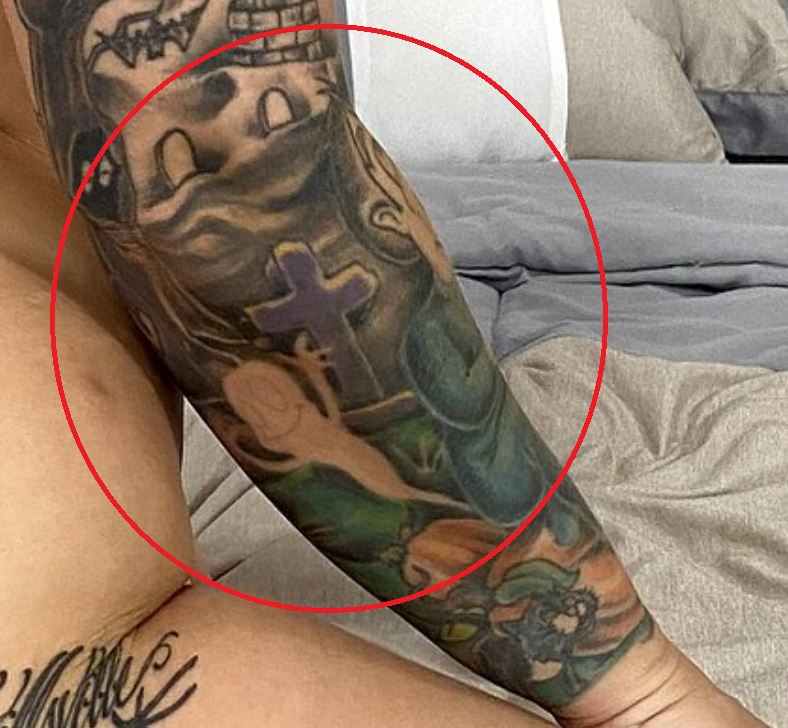 6. Writing on the lower body 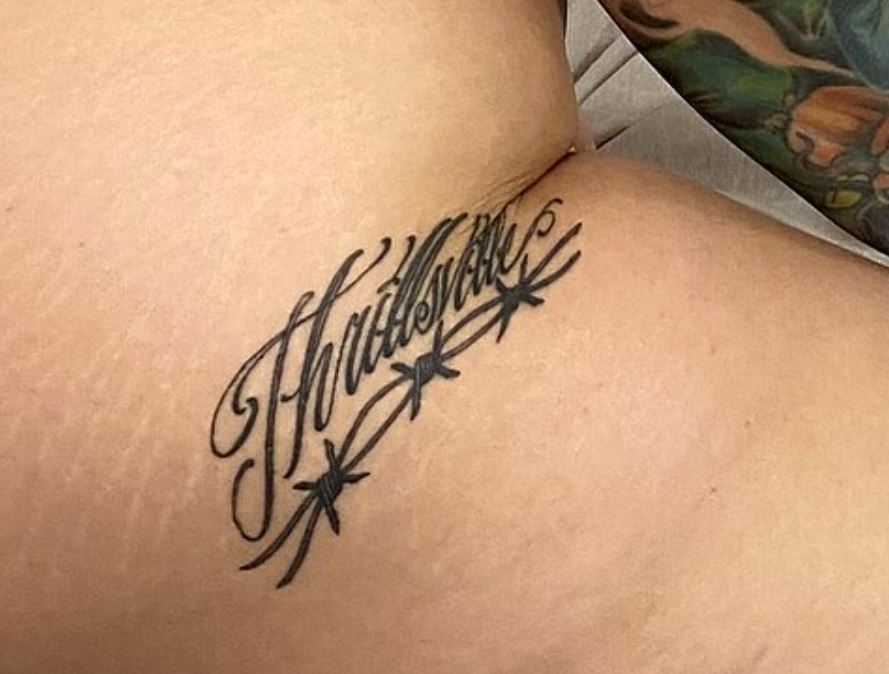 Tattoo: Across her right foot, Ivy has got a tattoo of th  portrait of Jesus Christ along with the Sacred Heart and the Holy Cross.

The Holy Cross is another symbol of paying respect and marking a remembrance of Jesus’s sacrifice. The Sacred Heart acts as a reminder to the person to be respectful and remember their own honest side.

Tattoo: Her right arm, is covered with a magnificent tattoo of a blue-colred castle. The castle is sy bolic of the Halloween. She claims to have got this themed tattoo done when she was 19. The blue colored c stle is actually a haunted house that leads towards a graveyard, and a little boy that is said to tell and share ghost stories, while si ting on  a pumpkin, as claimed by Ivy.

“Then I got my sleeve tattooed around that so you can’t really notice them anymore. I got my sleeve when I was 19 and that’s a whole Halloween theme. I’m obsessed with Halloween, like I said. I grew up being a goth girl. All things Halloween, I love. I have a haunted house on the top of my arm then it goes down to a graveyard and a little boy telling ghost stories sitting on a pumpkin. Stuff like that.”

Tattoo: A pair of rose sticks is tattooed on the right side of her bikini line with the words, ‘NAILED IT.’ 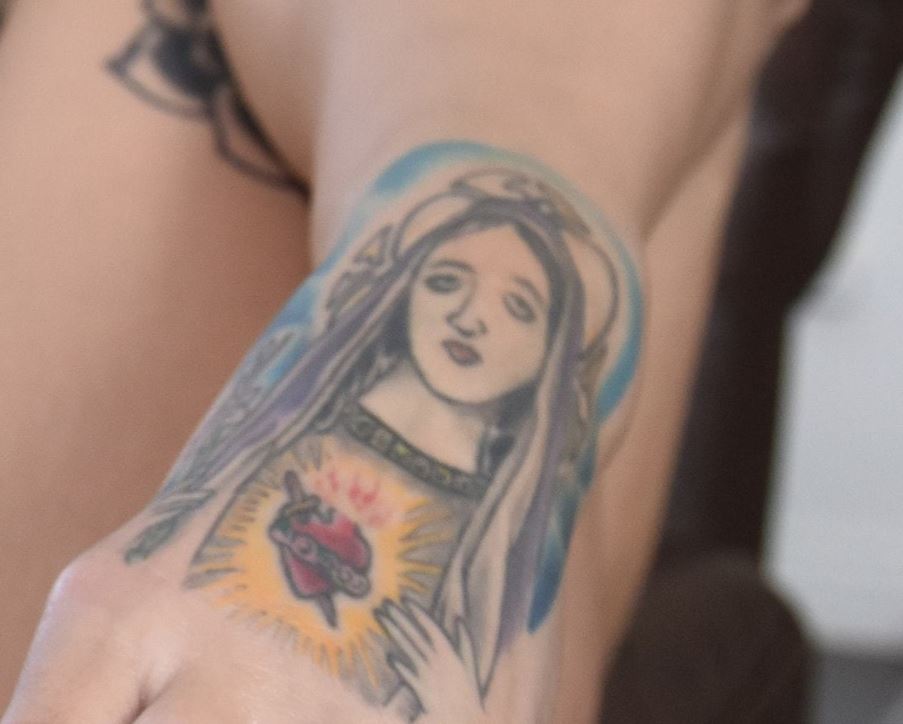 Tattoo: On her left foot, Ivy has got another religious tattoo that shows a portrait of the Virgin Mary.

Meaning: The Virgin Mary tattoo represents unconditional love and the scope of hope in the times of difficulty. It is also used to soothe folks who are seeking divine assistance.

he Virgin Mary also illustrates the type of mother we all like to have. A compassionate, sensitive, loving, and nurturing lady who can go to any extent for the sake of their children. 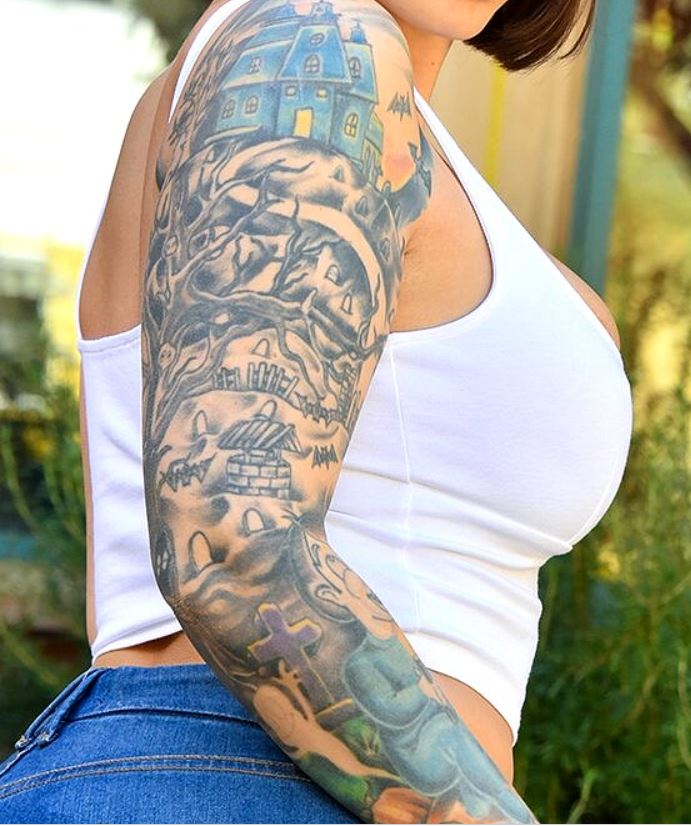 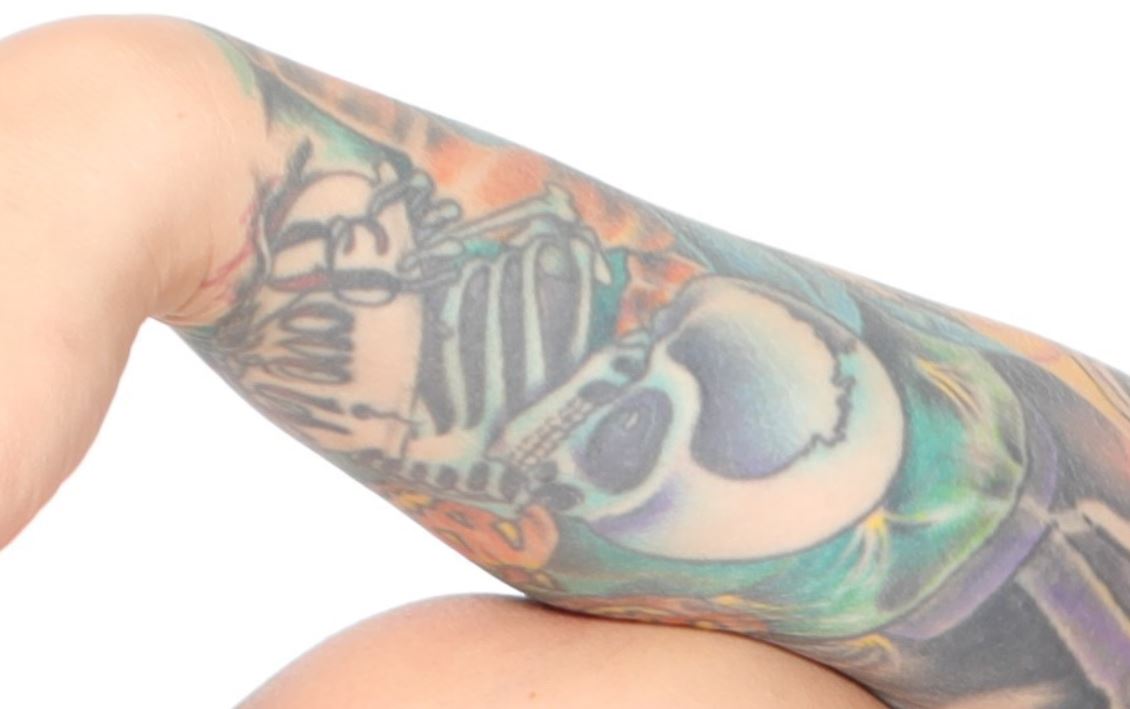 Tattoo: On her arm, surrounding her wrists, are the pair of baby skeletons holding razor blades along with the phrase “Love Is Suicide.”

Meaning: This is supposed to be Ivy’s first body tattoo that she claims to have got at the age of 18. The tattoo depicts some baby skeletons who are holding razor blades with the writing, ‘Love is Suicide’. The line is actually inspired from the lyrics of the song named, Bodies.

Bodies” is the lead single from the debut album Sinner by the American rock band Drowning Pool. Drowning Pool’s hallmark song, “Bodies,” was released in May 2001.

“When I was 18, I got my first tattoo. I got most of my tattoos between 18 and 21. Right out of the gate, I went to San Diego and I have combination of tattoos on my wrists. Sometimes, it’s hard to see. It’s little baby skeletons holding razor blades and it says ‘Love Is Suicide’. Very dramatic, very sad but it’s a lyric from Smashing Pumpkins, a song called Bodies.”

Tattoo: On the backside of her thighs, Ivy has got a pair of roses inked, one on either thigh.

Meaning: Roses are the token of love, romance, and affection. Also, they are the universal symbol of love between loved ones, especially, the couples!

Tattoo: On the backside of her thighs, we can see huge rose tattoos, one on either leg. 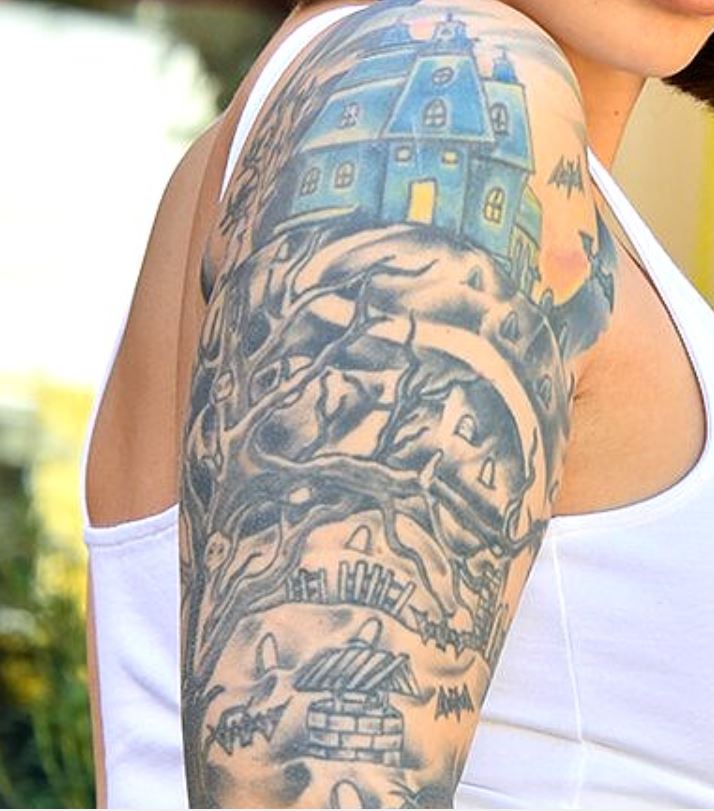 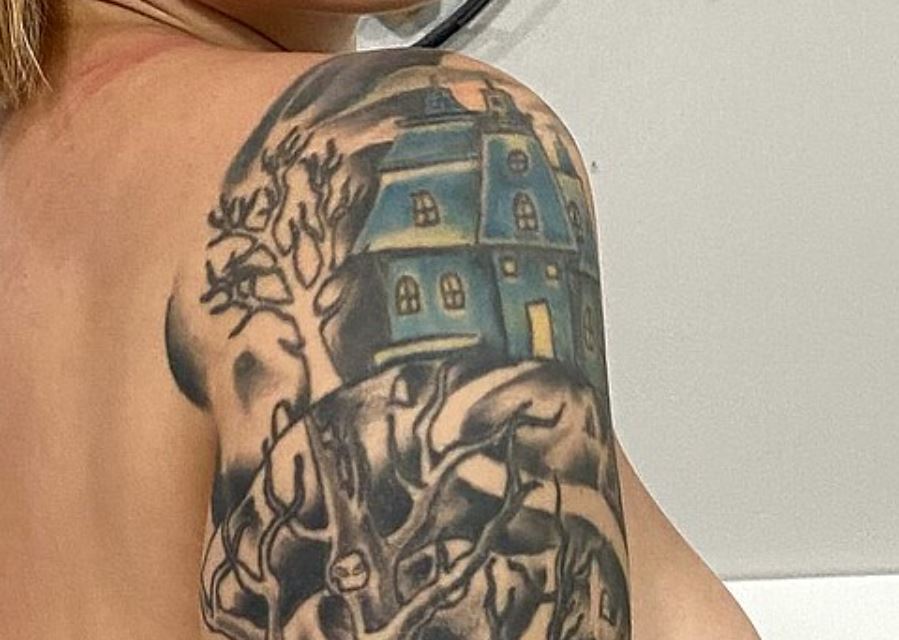 15. Writing on Left Thigh-‘It is not easy to pick up the pieces’ 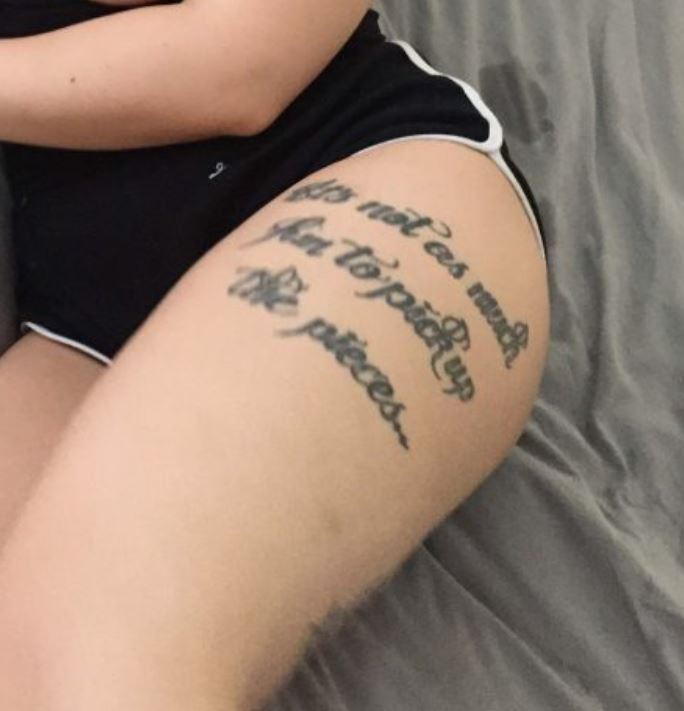 Tattoo: ‘It is not easy to pick up the pieces’ is tattooed on her upper left thigh. 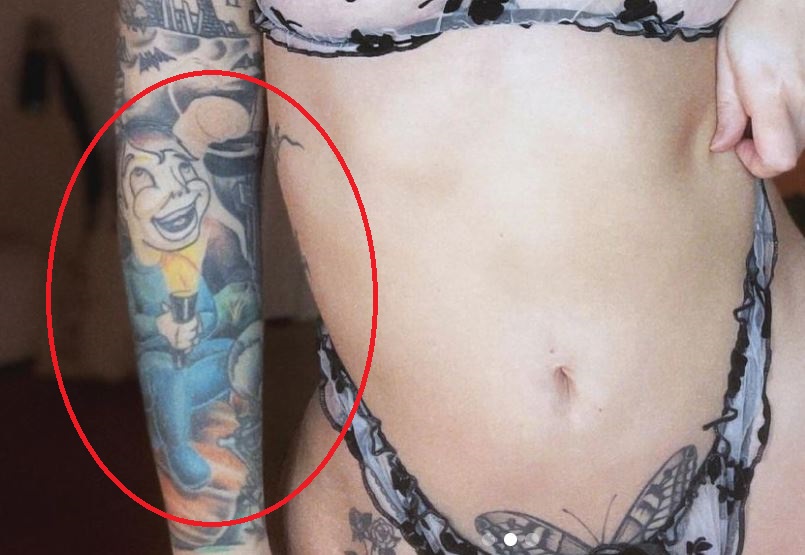 Tattoo: This cartoon on Ivy’s right forearm is a part of her spooky right arm tattoo that shows a boy who is sitting on a pumpkin and is said to be reading out the scary stories loud. 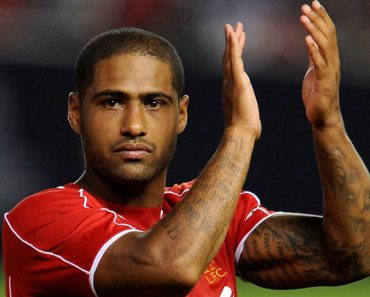 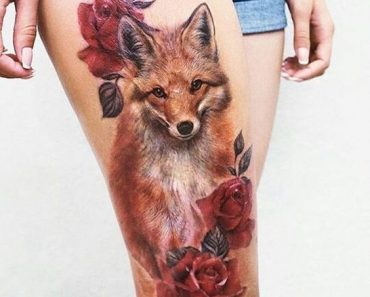