Lamont Marcell Jacobs Jr. is a well-known Italian track and field sprinter and long jumper. He used to play basketball and football when he was guided by his football coach to try his hands in sprinting owing to his extraordinary speed. He has an exemplary record of his victories in the Olympics, recording his championship in 100 meters in 2020, followed by 60 meters in European Championship in 2021. He and his team won a gold medal in the 4 × 100 m relay at the 2020 Olympics. Lamont has won all the hearts after becoming the first Italian to qualify and win men’s 100 meters in the Olympics. 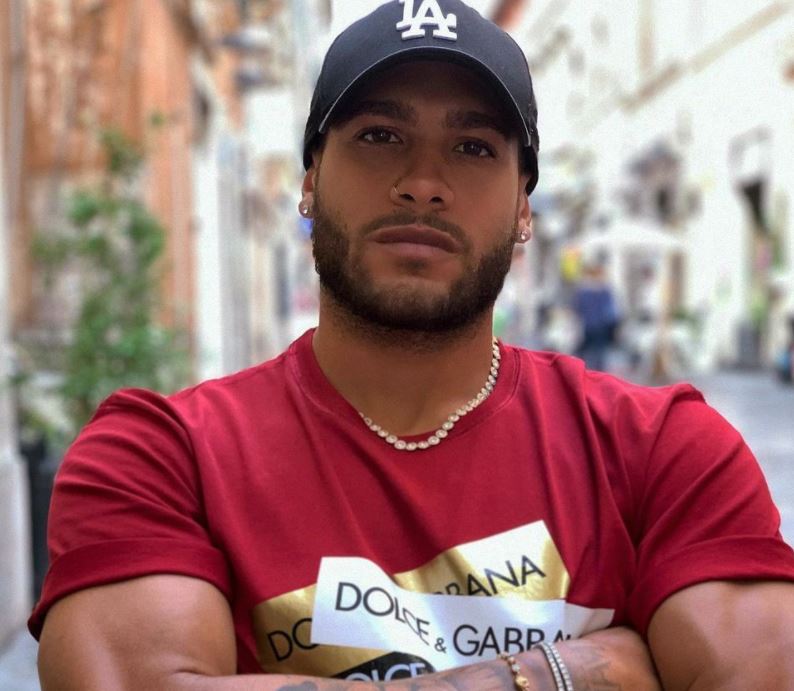 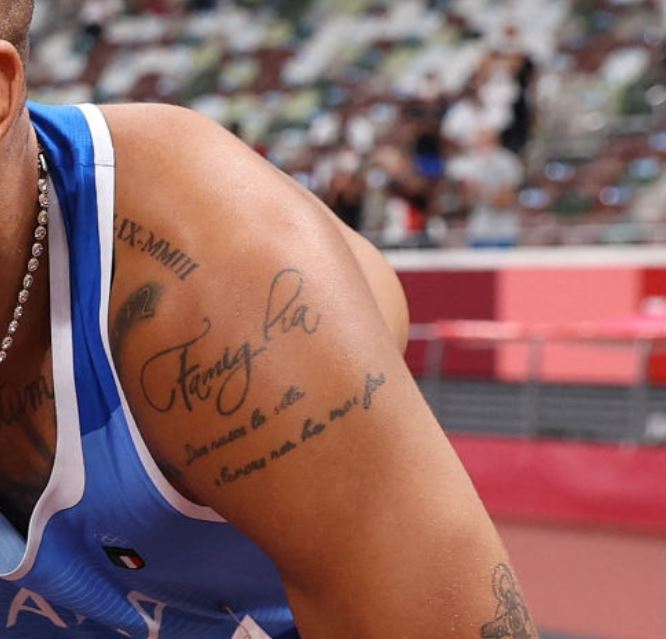 Meaning: The tattoo when translated into English stands for “Family. Where life is born and love never ends.”

“The tattoo represents my American side, my family is closest to me especially my kids, they are my life.” 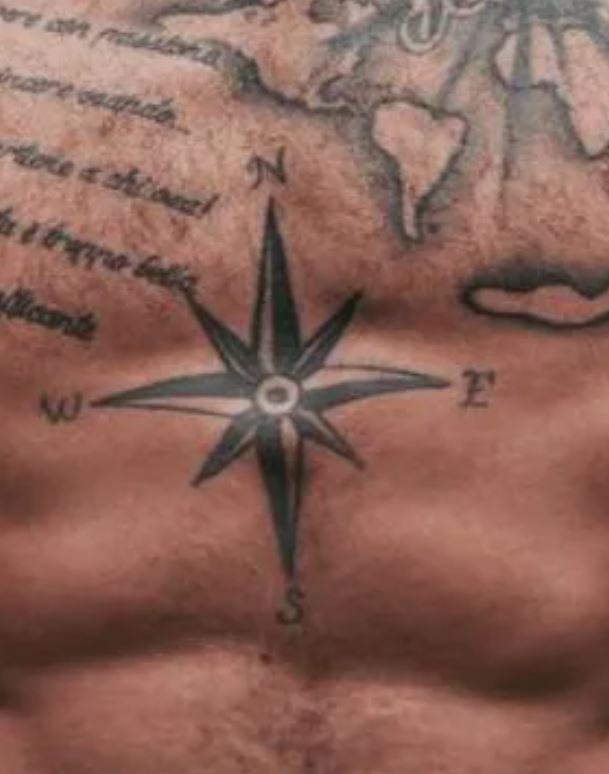 Tattoo: On the center of his stomach, Marcell has got a compass inked.

Meaning: Compass is the symbol of direction and guidance. It is symbolic of guiding our paths and helping us find our ways while leading our lives. It is also considered to be a symbol of protection and safety.

Tattoo: On his right pec, Marcell has a tattoo writing which says “It is really nice to fight with persuasion, embrace life and live with passion. Losing with class and winning by daring, because the world belongs to those who dare “.

Meaning: It is a famous Charlie Chaplin quote that means that we should keep following our dreams and continue living life with passion. It is best to dare and live to the fullest. 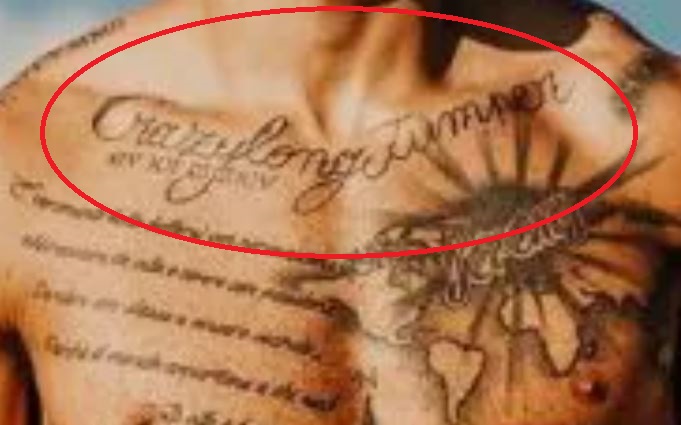 Tattoo: On his neckline, across his beauty bones, Marcell has a tattoo that says, “CrazyLongJumper”.

Meaning: Marcell’s Instagram handle has been named by the same name. The tattoo represents his outstanding talent and a special reference to Long Jump. He has also won the Italian Athletics Championships in the long jump in 2016.

Tattoo: There is a massive tiger inked on Marcell’s back.

Meaning: Tiger is the symbol of power, courage, strength, and wisdom.

«I am strong and combative, but also lonely, just like the tiger I tattooed on my back – he says speaking about himself -. I don’t usually open up very much, but if people know me, they understand that I’m not the person they expected. ” 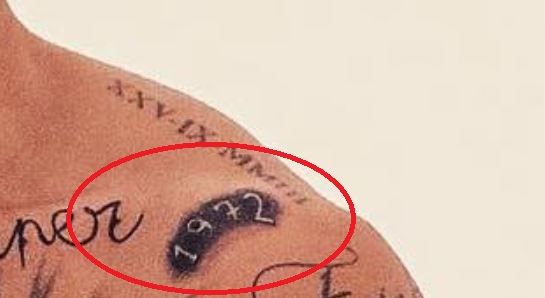 Tattoo: The year 1972 is tattooed across Lamont’s left shoulder blade. It might represent the birth year of his mother/father. 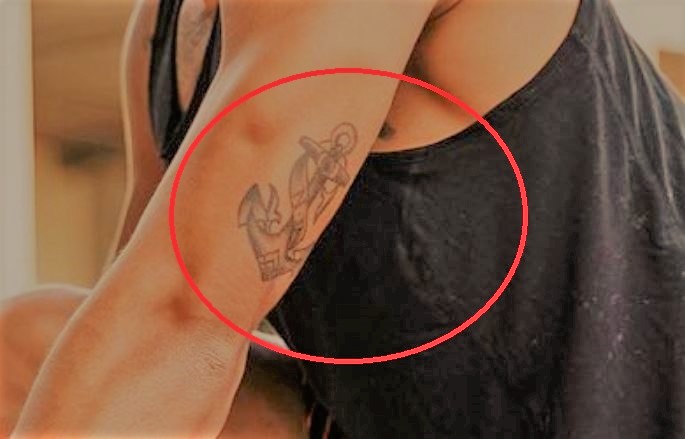 Tattoo: on his upper right arm, Marcell has got an anchor tattoo. Also, there is a banner wrapped around the anchor that contains initials, ‘N’ and ‘L‘.

Meaning: An anchor is the symbol of strength and protection. It can also mean stability, passion, determination, and infinity. As per Christian beliefs, an anchor is regarded as the symbol of hope and security. The initials represent his partner’s and his own name; N for Nicole Daza and L for Lamont Marcell Jacobs.

Tattoo: On his lower abdomen, Marcell has got the tattoo of the name, ‘Anthony’ inked.

Meaning: Anthony is the first name of Marcell’s son. He was born to Nicole Daza and Marcell in 2019.

Tattoo: On the left side of his stomach, Marcell has got the tattoo of the famous Latin phrase, ‘ Carpe diem’.

Meaning: The phrase stands for ‘seize the day. It means that we should focus on living in the present without worrying about the future. It is considered to be the universal symbol of happiness. 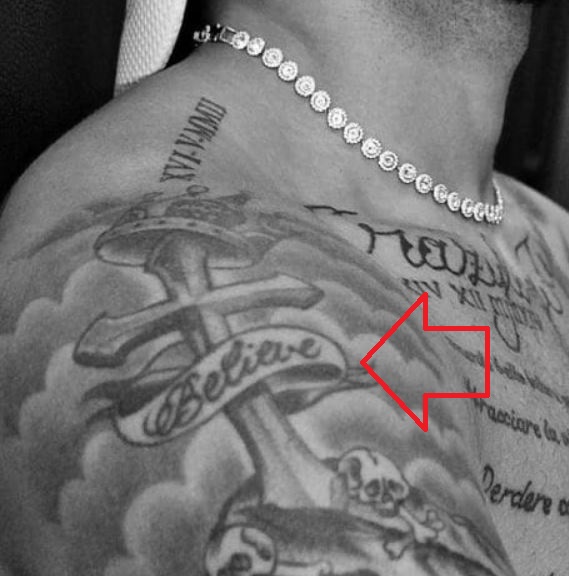 Tattoo: On his right shoulder, there is a cross tattooed along with the word, ‘Believe’.

Meaning: Cross is the Holy Symbol of Christians. It represents Marcell’s faith in his religion i.e. Christianity. Cross tattoo is the way of paying tribute to the sacrifice made by Jesus Christ for sake of humanity. It is the sole representation of unconditional love and sacrifice. 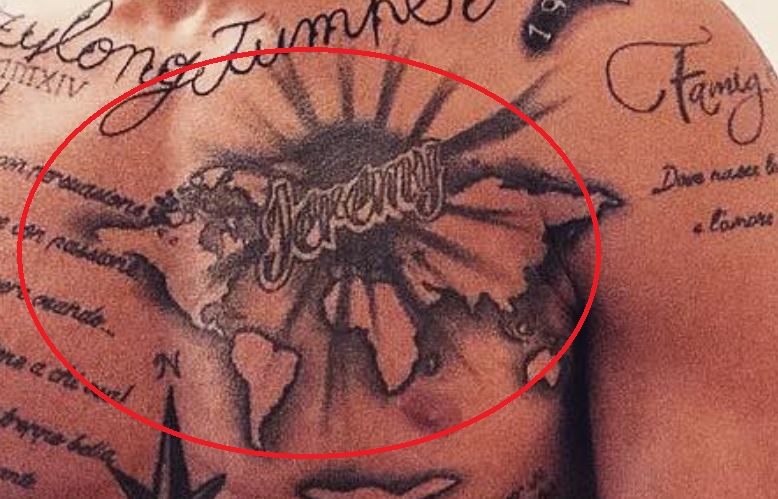 Tattoo: On his left pec, Marcell wears the ink of the name ‘Jeremy’. Also, surrounding the name is the whole world inked.

Meaning: Jeremy is the name of Marcell’s eldest son who was born in 2013. The universe tattoo shows that Marcell’s love for Jeremy is unlimited and is just like the universe. Jeremy was born to Marcell and his ex-partner when he was just 19 years old. 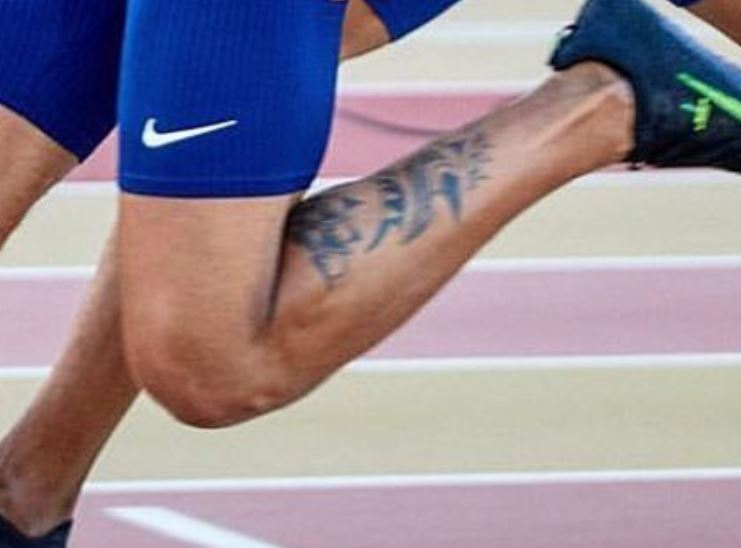 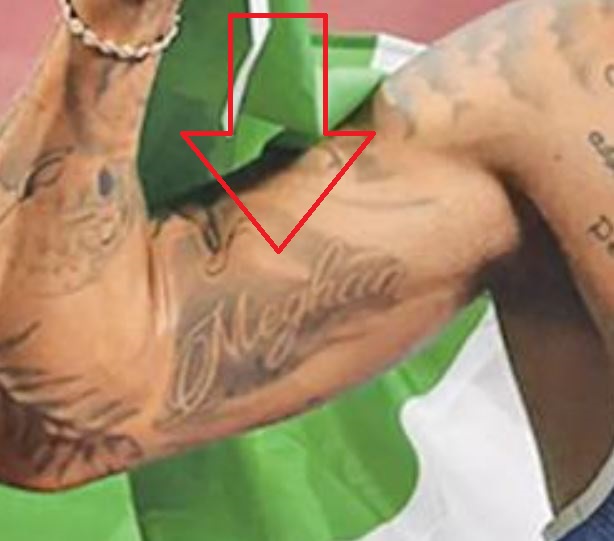 Tattoo: On his inner right bicep, Marcell has got the name of his first son tattooed. The tattoo says, ‘Meghan‘ who was born to Marcell and Nicole in 2021. 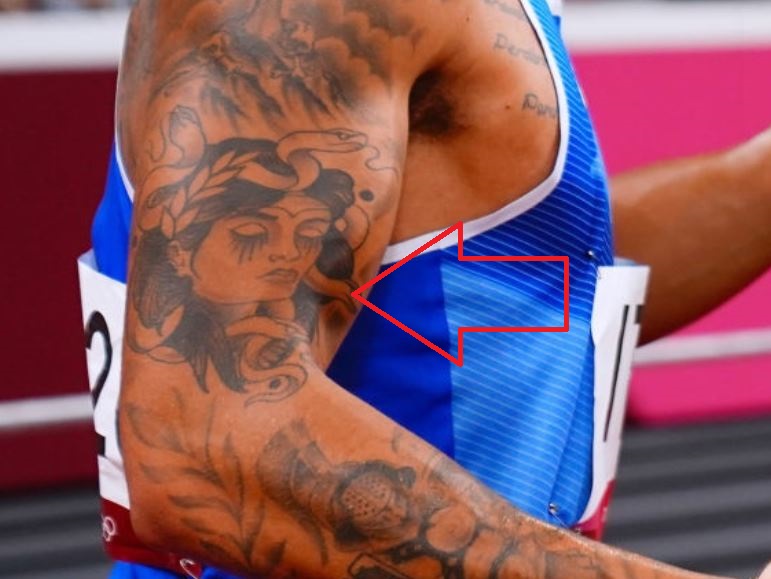 Tattoo: On his right upper arm, there is an attractive face of Medus tattooed.

Meaning: Medusa’s tattoo is considered to be a dangerous threat. It is used as means to deter threats from approaching you. More specifically, she represents female power, transformation, and freedom. She is believed to ward off the evil and negativity away from the wearer of the tattoo. As per Ancient Greek Mythology, Medusa also known as the Gorgo was one of the three Gorgons who were described as monstrous. They were actually described as the winged human females who were believed to live with living venomous snakes in the place of their hair. Those who looked into her eyes would turn into stone. 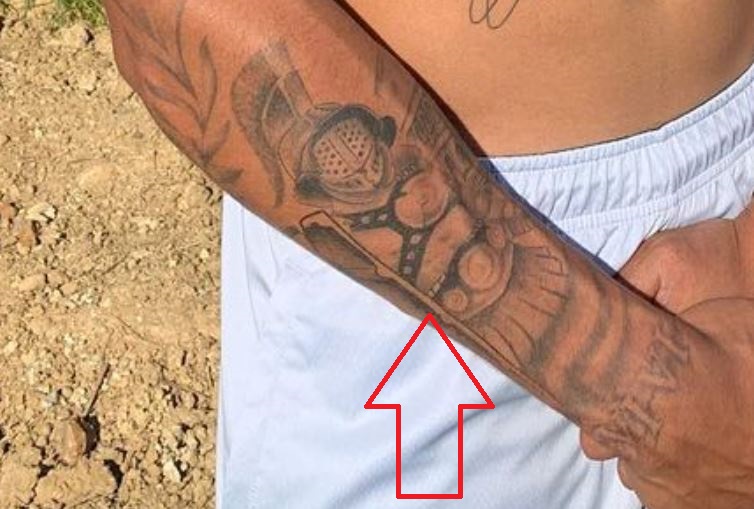 Meaning: Gladiator tattoo is the symbol of courage and strength. It is often observed as the symbol of masculinity. Gladiator movie is based on the real events that actually happened in the Roman Empire in the latter half of the 2nd century AD.

18. Roman Numerals on the left shoulder 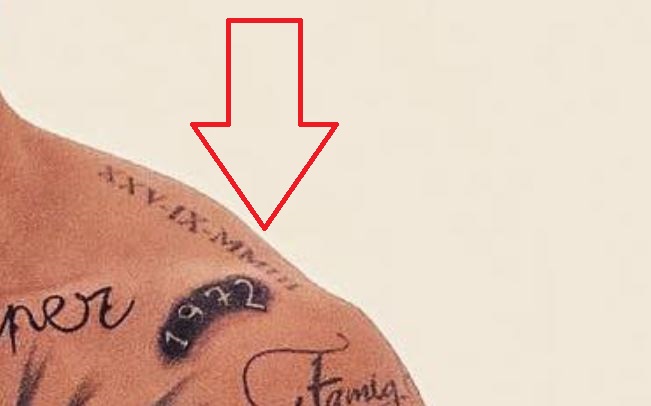 Tattoo: On his left shoulder blade there is another roman numerals tattoo that can be read as ‘XXV-IX-MMIII‘ which stands for ‘25-09-2003‘. 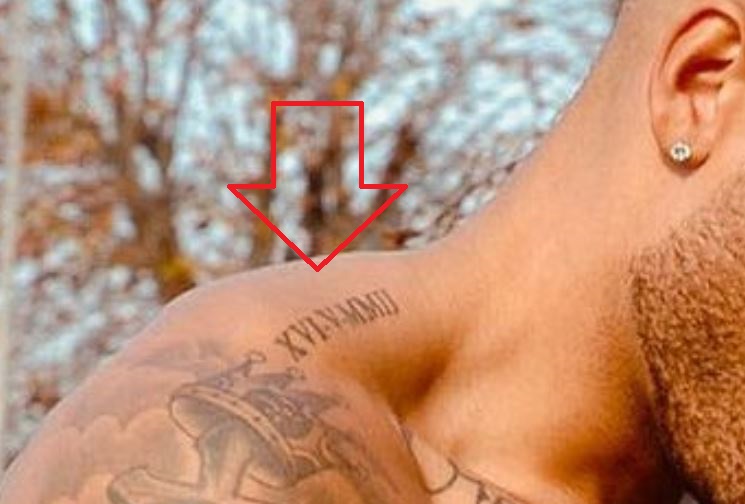 Tattoo: the roman numerals tattoo on his right shoulder blade can be read as, ‘XVI-V-MMII‘ which stands for ‘16-5-2002‘. 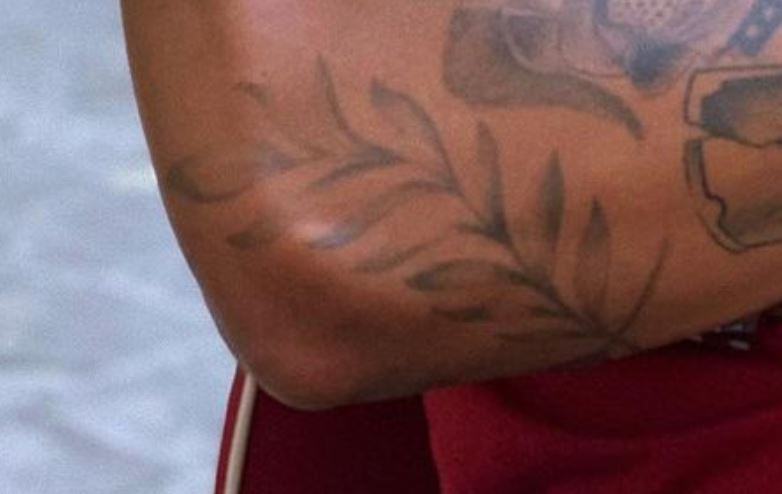 Tattoo: There is a single leafy stem tattooed near his right elbow.

Meaning: A single leafy stem is the symbol of happiness. It may also represent growth, joy, hope, renewal, and revival. 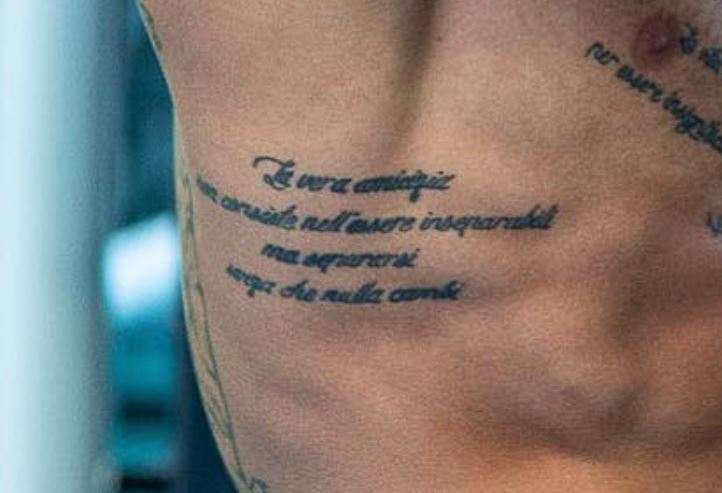 Tattoo: Towards the right side of his stomach, Marcell has got Italian writing that says, “Il vero amore non significa essere inseparabili; significa essere separati e nulla cambia‘.
Meaning: The famous writing means, ‘True love doesn’t mean being inseparable; it means being separated and nothing changes when translated, into English. This tattoo is his representation of love for his partner, Nicole Dave. They both have two children together, Anthony, and Meghan, born in 2019 and 2021, respectively. 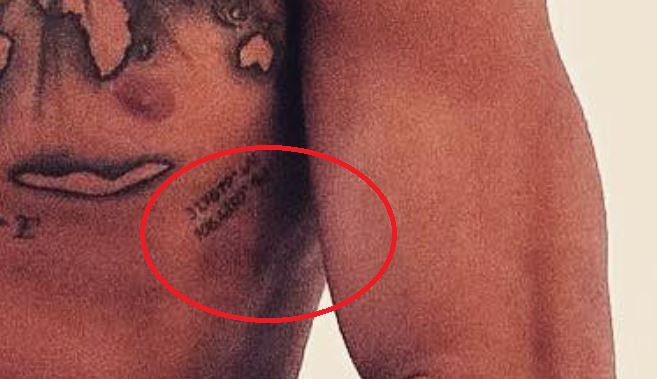 Tattoo: There is small writing on the lower left side of his left pec.