Emmanuel Gazmey Santiago, better known as Anuel AA, is a Puerto Rican singer, songwriter, and rapper. He is known for his style of rapping about urban life in Puerto Rico and is a prominent part of the Latin Trap culture. He is currently signed with Rick Ross’ Maybach Music Group and released his debut album, “Real Hasta la Muerte”, in 2018 when he was released from prison. Since then he has become a global success and has worked with various artists. Anuel loves tattoos and has many of them on his body. Let us take a look at his tattoos and the meanings behind them. 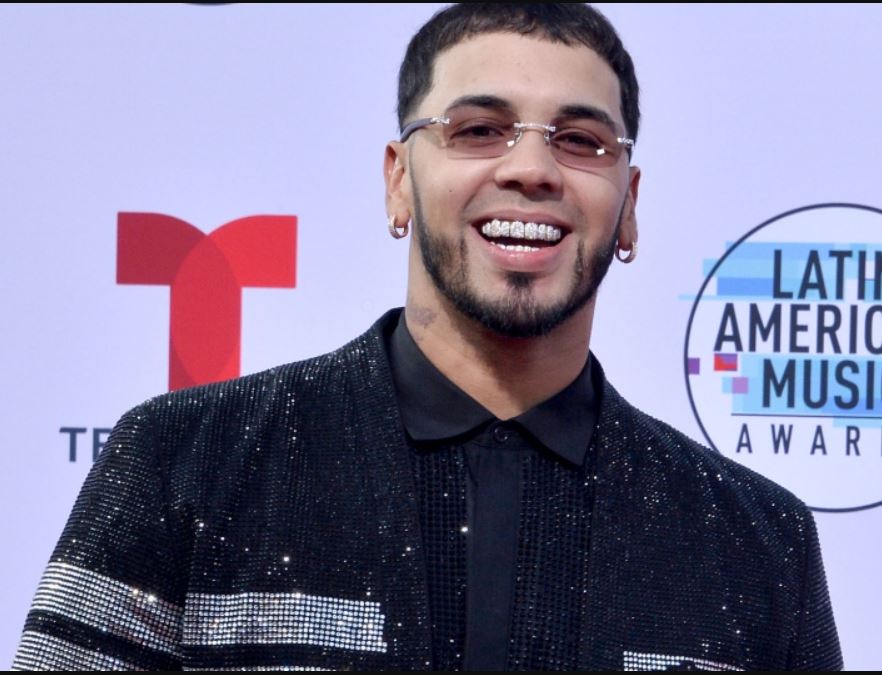 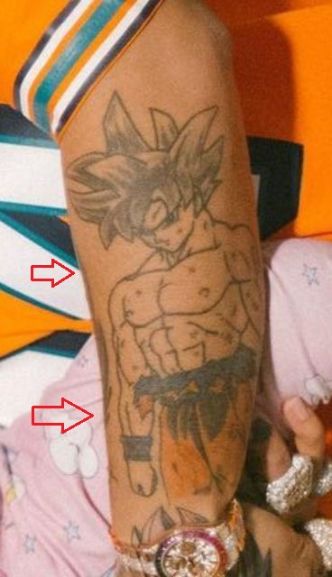 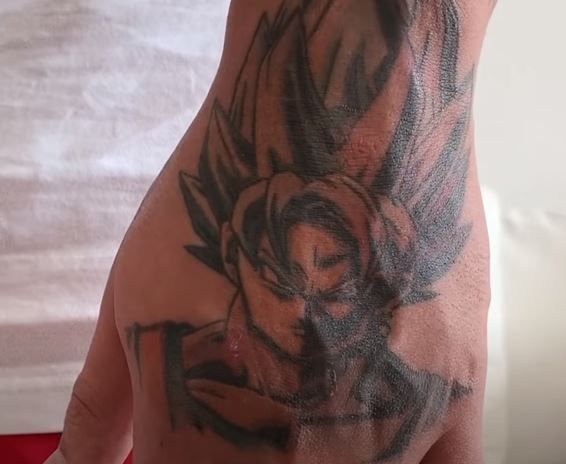 Meaning: The left arm of the rapper is dedicated to his childhood memories and tattoos. The tattoo of Goku is from one of his favorite shows, Dragon Ball Series, which is the reason behind him getting this tattoo. 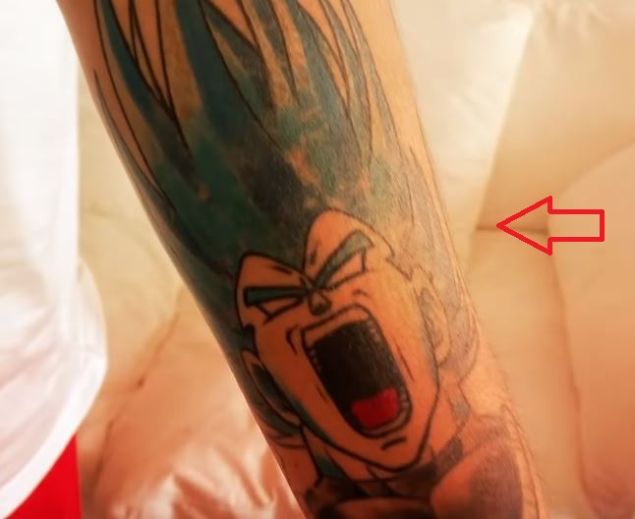 Tattoo: The inner side of his left forearm contains a tattoo of Vegeta on it.

Meaning: Vegeta is another one of his favorite characters from Dragon Ball Z whom he loved as a child. 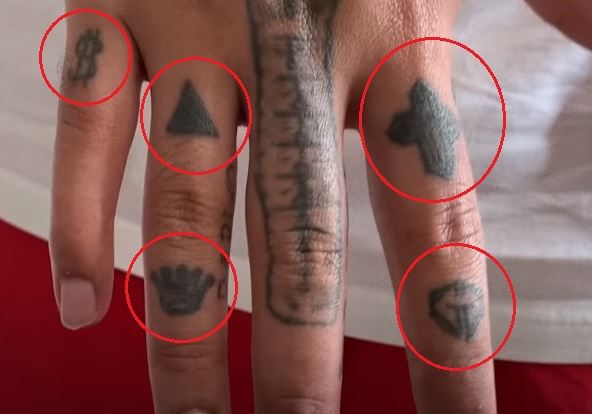 Tattoo: The right hand of the rapper has different symbols tattooed on it his fingers. His pinkie has a dollar sign on it. His ring finger has a dark triangle and a crown. His index finger has a cross on it and the letters, “GG” done as mirror images of each other.

Meaning: The dollar sign is just a random symbol of money and his rich lifestyle. The triangle on his finger is the Alchemic symbol for Fire. The crown might be for himself or his son, whose name is tattooed adjacent to the tattoo. The cross represents Anuel’s religious views and the sacrifice of Jesus Christ to save humanity. 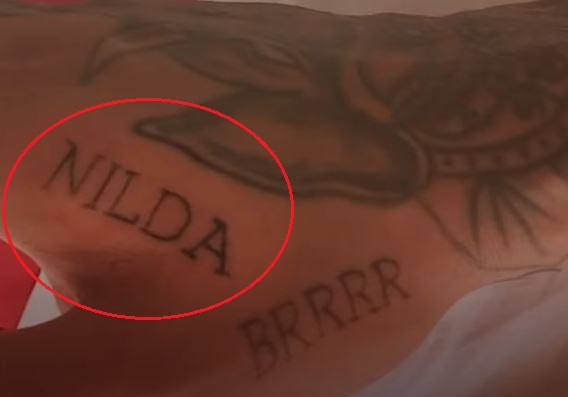 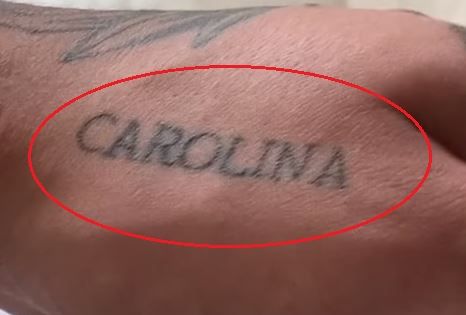 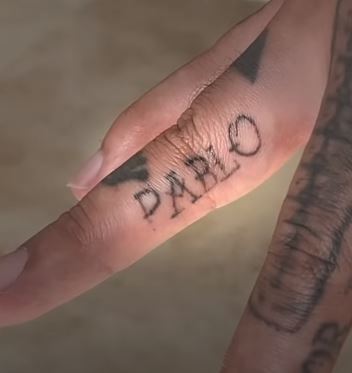 Meaning: The names on his hands are the names of his family members. Nilda is the name of his mother. Carolina is the real name of his wife, Karol G (Carolina Giraldo Navarro) and Pablo is the name of the couple’s son. He got the names tattooed on his hands so that his family is always present in his mind. Karol also has his name tattooed on her body. 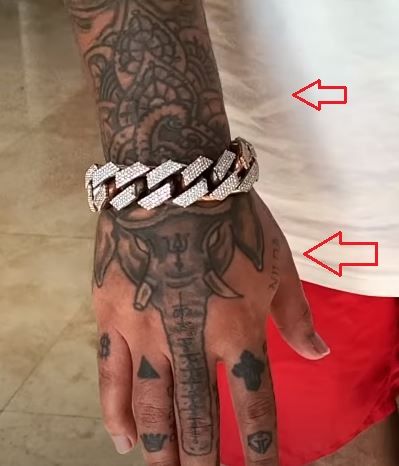 Tattoo: The right hand and wrist of the rapper have a tattoo of an Elephant on it with a large crown. The elephant’s trunk reaches up and covers his right middle finger too.

Meaning: The tattoo on his right hand is of the Hindu deity, Lord Ganesha. However, Anuel was not aware of this when he got the tattoo and he got it with his friend because it looked good upside down too. His friend got the same tattoo on his hand and passed away a month later so the tattoo is close to Anuel’s heart. 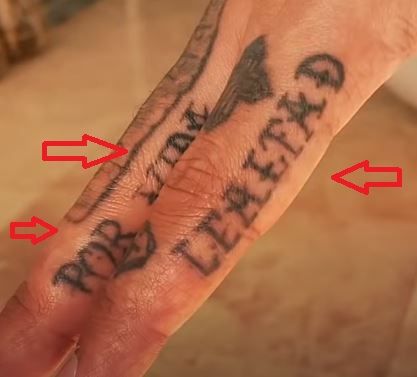 Meaning: The words on his fingers are in Spanish and represent the Spanish phrase, “Lealtad de por vida” that means, “Loyalty for life”

Tattoo: The side of the rapper’s right forearm has the words, “Real Life” tattooed on it. There is also an alien with red eyes tattooed between the words wearing a gas mask.

Tattoo: The upper part of his right forearm has a logo tattooed on it that is made up of two Ms inside a triangle. The word, “Ambition” is tattooed below the logo and the quote, “Real Hasta la Muerte” is tattooed above the logo.

Meaning: The logo on his arm is the logo of Maybach Music Group which is the record label Anuel signed with. It was a great moment for his life and his career so he got the tattoo on his body. The word, “Ambition” is a random motivational word to help him work harder. The quote on his arm is a Spanish one that he lives by that means, “Real Until Death”. The quote is also the name of his debut album and is tattooed on another place of his body too as you will soon find out. 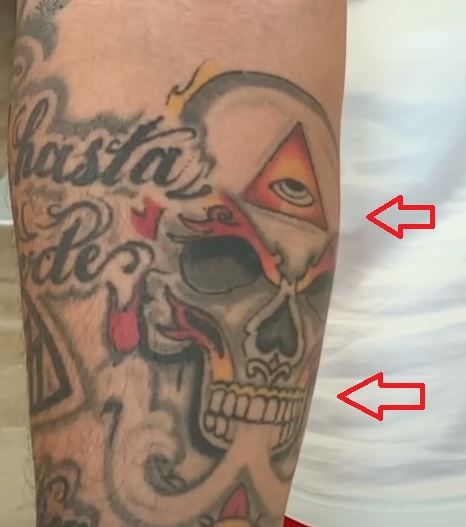 Tattoo: There is a skull tattooed on the inner side of his right forearm with a fire burning on his face. The skull also has the Illuminati eye inside a triangle on the skull’s forehead and smoke coming out of its mouth.

Meaning: The tattoo on his arm is an interpretation of Ghost Rider with the Illuminati Eye on his forehead. Anuel used to read a lot about life and gain knowledge that included conspiracies too when he got this tattoo. 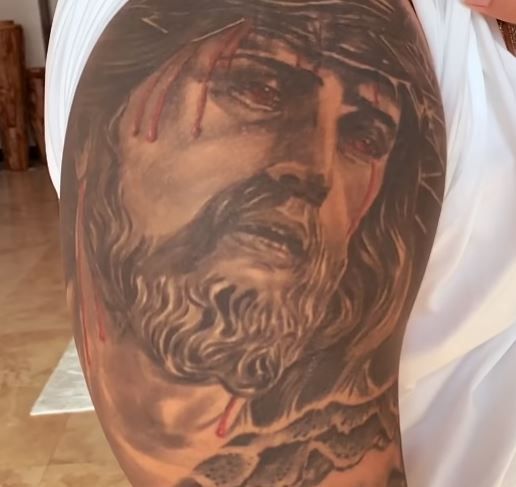 Tattoo: There is a tattoo of Jesus’ face covering the right shoulder of the rapper. Jesus is seen wearing a crown of thorns with blood dripping down from his forehead.

Meaning: The tattoo of Jesus Christ on his body represents Anuel’s religious views. The tattoo shows his conviction in his beliefs and how Jesus gave his life as a sacrifice for humanity. He later added the tattoo of the Virgin Mary below it too. 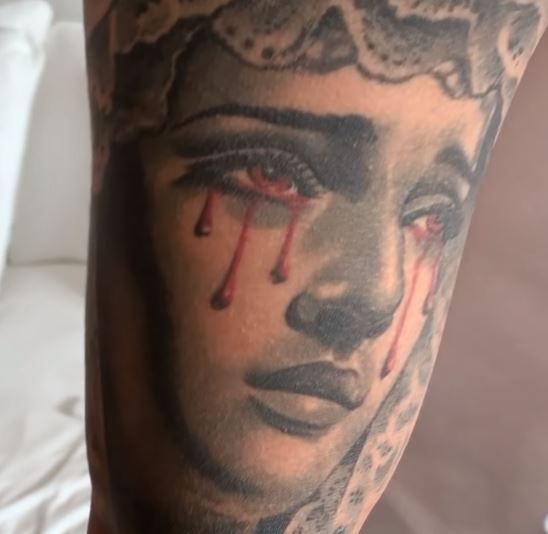 Tattoo: There is a tattoo of the Virgin Mary on his right upper arm, below the tattoo of Jesus Christ. Mary is also seen crying out tears of blood in the tattoo. 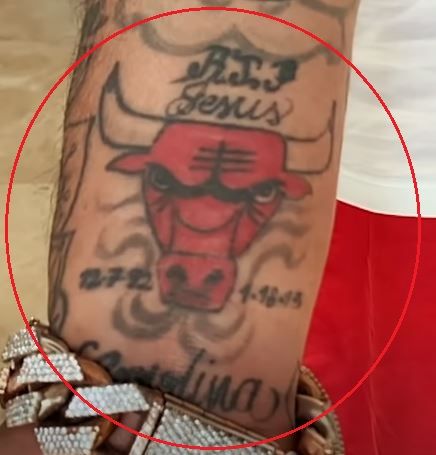 Meaning: The tattoo of the bull on his forearm is the logo of the Chicago Bulls. This tattoo is the most meaningful one and an important one for his body as it is a tribute to his friend, Jesus who has passed away. The tattoo also has Jesus’ date of birth and death tattooed on the sides of the bull. This is a matching tattoo that Anuel got with Jesus’ brothers after his passing. The name, “Carolina” is the real name of his wife, Karol G. 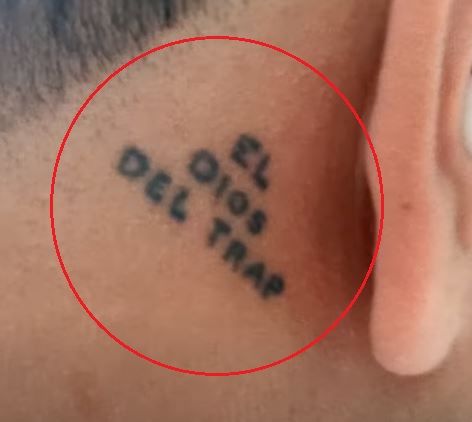 Tattoo: Anuel’s neck, behind his right ear, has the words, “EL DIOS DEL TRAP” tattooed on it.

Meaning: The words on his neck are in Spanish and translate to, “The God of Trap” which is a nod to his singing style of Latin Trap. 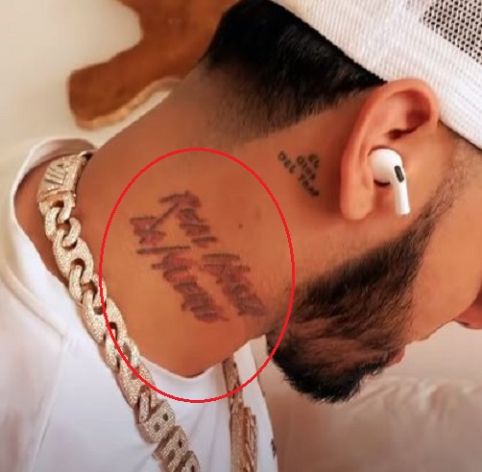 Tattoo:  The words, “REAL HASTA LA MUERTE” are tattooed on the right side of the rapper’s neck.

Meaning: The quote on his neck is in Spanish and is a saying which he regularly says. The quote translates to, “Real Until Death” and is one that he lives by. He believes in being true to himself and to God. The quote is also tattooed on his right forearm and was also the title of his debut album. 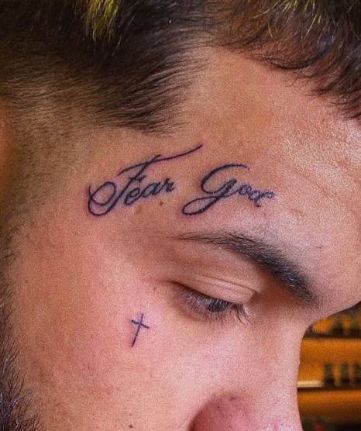 Meaning: Anuel’s face tattoos represent his religious views as he prays and is thankful to God. The cross represents Jesus’ sacrifice to save humanity and the quote spreads his idea that one should fear God and always do what is right. 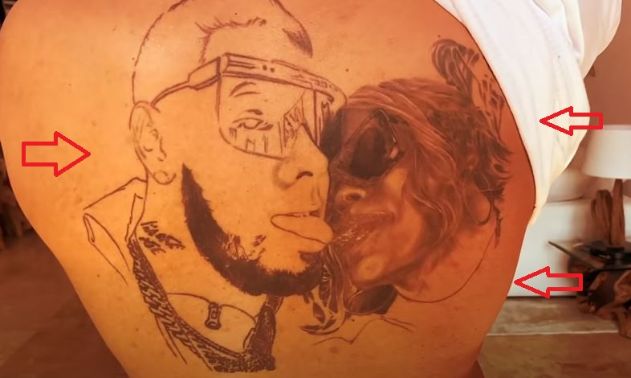 Tattoo: The upper back of the rapper has a tattoo of a man and a woman posing for a photograph tattooed on it in the form of a portrait. The tattoo is incomplete as the man’s head has not been completed but the woman is.

Meaning: The tattoo on his back is a portrait of Anuel himself and his wife, Karol G, whom. The portrait was done from one of the first photographs that the couple clicked together and is a large tattoo that is yet to be finished. 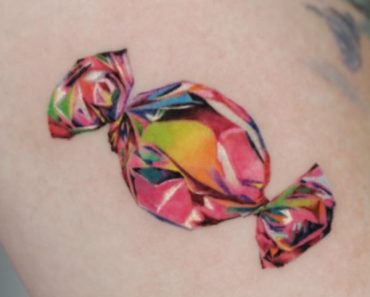