Dwayne ‘The Rock’ Johnson is an American actor, producer, businessman, and former professional wrestler who has a rich history which he represents by his affinity for tattoos. His popular tattoos are on his chest and arms. In an interview, Johanson said,

The story of my (chest and arm) tattoos is a very elaborate story. It represents all the things that are important to me, that I love and that I’m passionate about.” 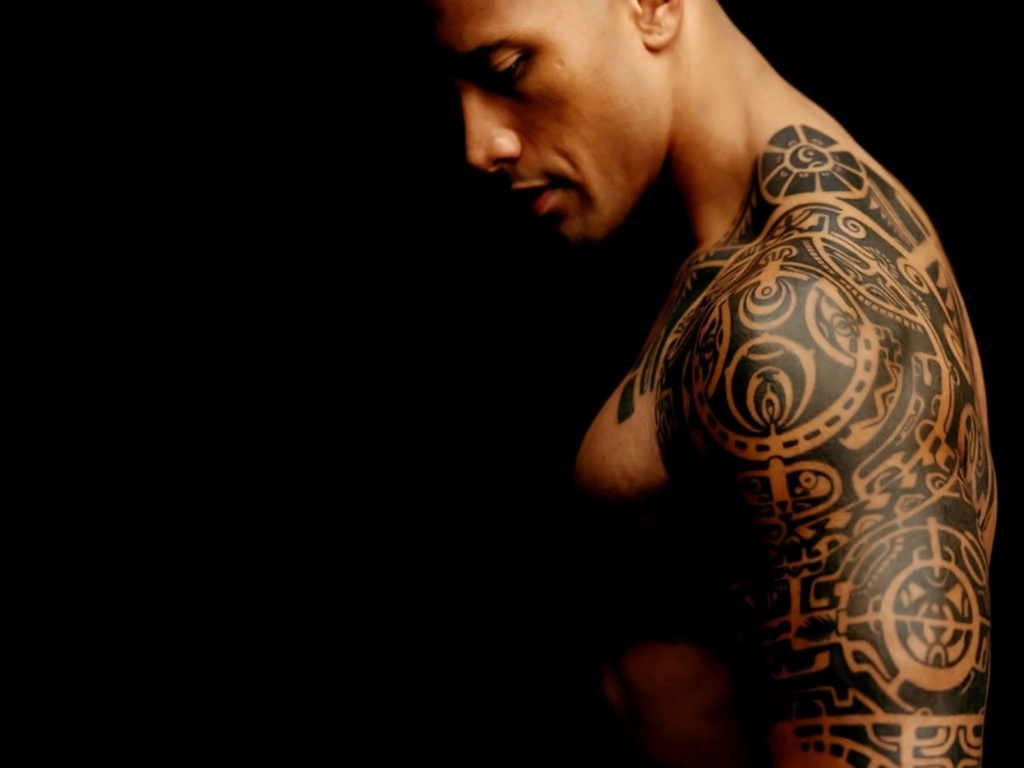 Tattoo: ‘Intricate Tribal’ Tattoo on his chest and left arm.

Meaning: The Rock’s tattoos come down to three things: family, protecting his family, and having an aggressive warrior spirit. It would be difficult to put into words, the meaning of the ink as a whole. Therefore, we’ve broken down the intricate ink into fragments, explaining their unique meanings:

a) The Great Eye

The Great Eye is supposed to let the person who has inked it, possess the spirit of his or her enemy. This symbol is used as a distraction in times of confrontation. 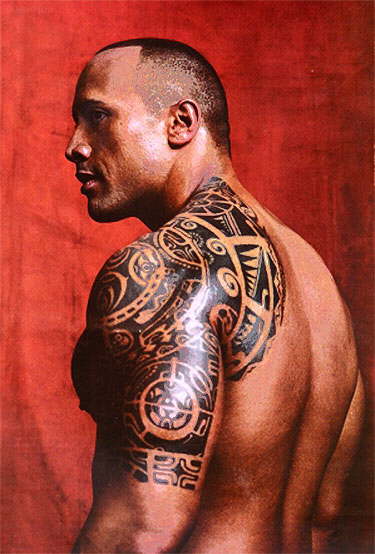 Descending swirls around The Rock’s left shoulder represent past, present, and future. The pattern furthers under his arm, where its meaning is written. It says, “It changes in the place where it is found to be gone.” 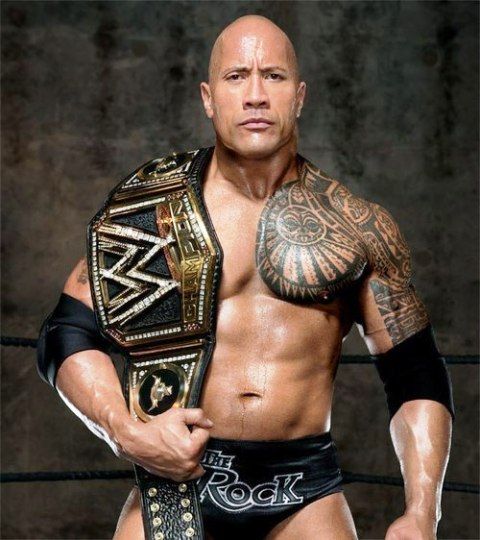 The tattoo on his chest represents the ‘warrior spirit’ which helps him to overcome obstacles. This is why he has it made over his heart.

The coconut leaves on his collarbone represent Samoan chief-warrior. 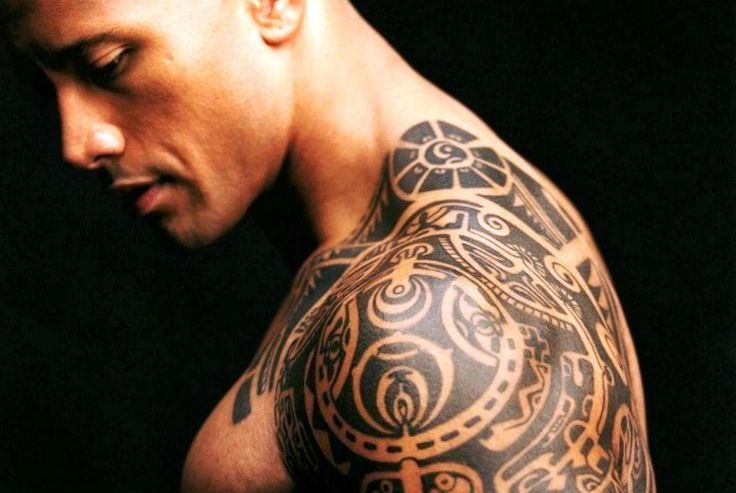 The sun behind his coconut leaves represents good fortune.

This isa/ga fa’atasi (three people in one), that’s me with my arms open. As it continues on my chest, it connects to my o lo’u to’a/ua (my wife, Dany) and my o lo’u afafine (my daughter, Simone Alexandra).”

The two eyes called o mata e lua to represent his ancestors and who he believes to be watching over his path.

The broken face marked by shark teeth represents his protector and his struggles throughout his life. It is also a symbol of strength.

The priest or the spiritual guide helps the warrior to attain his supernatural powers and enlightenment.

Stones of achievement and abundance are inked around his bicep. The Rock says

they’re the foundation of my life and symbols of my dedication. They bring the right to stand and speak with honor as a Tula Fale—a high talking chief—and they maintain mana or supernatural power.” 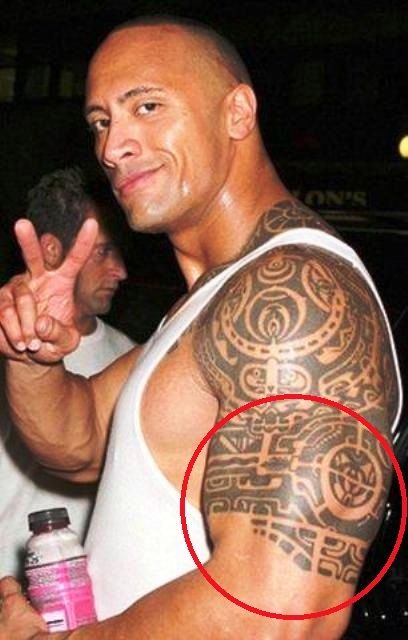 The lower part of The Rock’s left arm tattoo is a tortoiseshell design. Warriors used these as shields for protection from evil spirits. 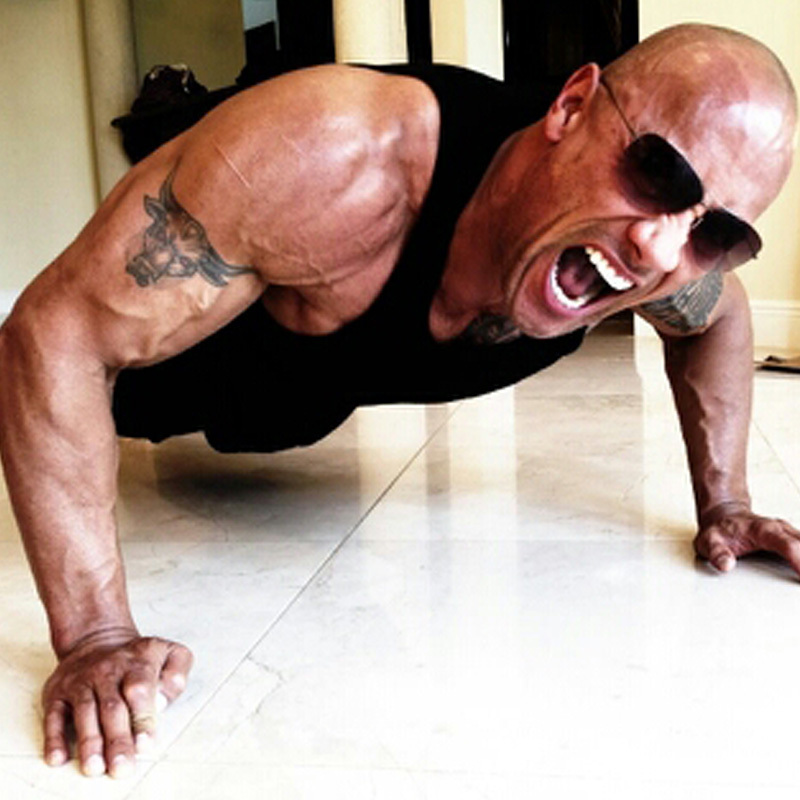 Tattoo: ‘The Brahma Bull’ Tattoo on his right arm.

Meaning: The bullhead tattoo on Dwayne ‘The Rock’ Johnson’s right arm is his other tattoo and also the first one that corresponds to his Western zodiac birth sign of Taurus, the Bull. The tattoo is a long-horn type of steer with red-colored eyes. 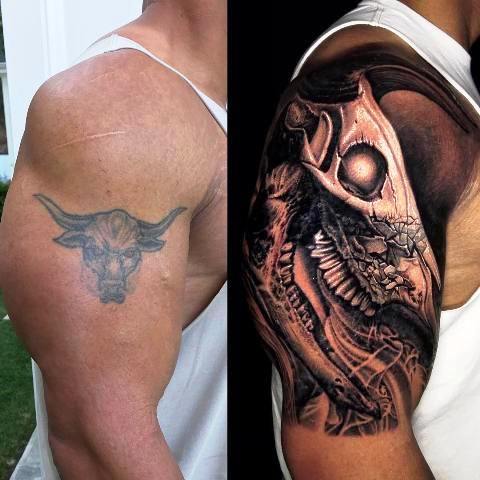 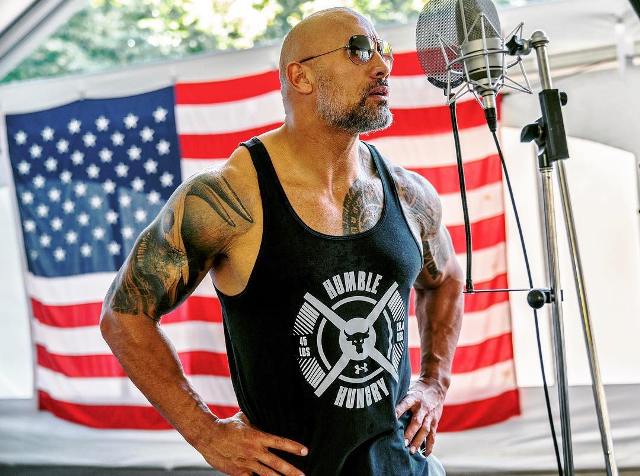 Tattoo: ‘Evolution of Bull’ Tattoo on his right arm.

Meaning: In August 2017, The Rock got his bull tattoo transformed into a new one. Every detail in this ink is a reflection of his personal history. On August 11, 2017, The Rock uploaded the picture of this tattoo on his Instagram account, with the caption,

Evolution of the bull. Blood, sweat & years. After 3 sessions and 22hrs of tattooing with world-renowned @NikkoHurtado, the story’s almost done… Every detail is a reflection of my own personal history. From the cracks and heavy damage in the bone representing life’s hard lessons, I’ve learned over the years. Just like scars and wrinkles – I’m so grateful to have ’em because they’re earned. To the horns, not pointing up or out to the side, but pointing straight ahead representing relentless energy and forward progress. The core and anchor of this image are in the eye. Look closely and you’ll find the life, energy, power and you’ll feel the MANA (spirit). The eye tells the story of disruptive positive energy always ready to dent the universe. Depending on the light and angle, sometimes the energy’s subtle and sometimes it’s glaring. But it’s always alive and ready to disrupt the universe and love and protect my family and all the things I love with intense passion and gratitude. Cheers to living, learning, evolving and growing. And to the positive disrupters ready to dent the universe.”

This tattoo is inked by the tattoo artist, Nikko Hurtado. 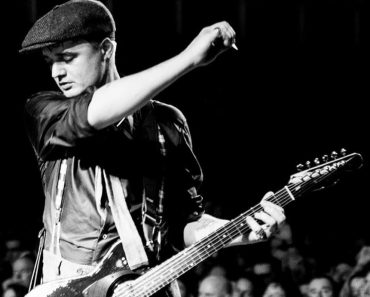