A good doctor-patient relationship is one of the most important factors in providing the best possible treatment and care. However, what happens when a doctor’s tattoo doesn’t conform to the standard ‘doctor image’ and shakes the patient’s trust?

There are a lot of complexities involved in this topic. Medical schools and medical staff, in general, have become increasingly progressive over the past decade, to the point that doctors now have tattoos as part of their daily routine. Still, there are some questions on whether the tattoos should be visible or not and whether they undermine the trust the patient has in the doctor.

In this article, we will take a look at two doctors, who are fabulous with their jobs even with some ink on them! 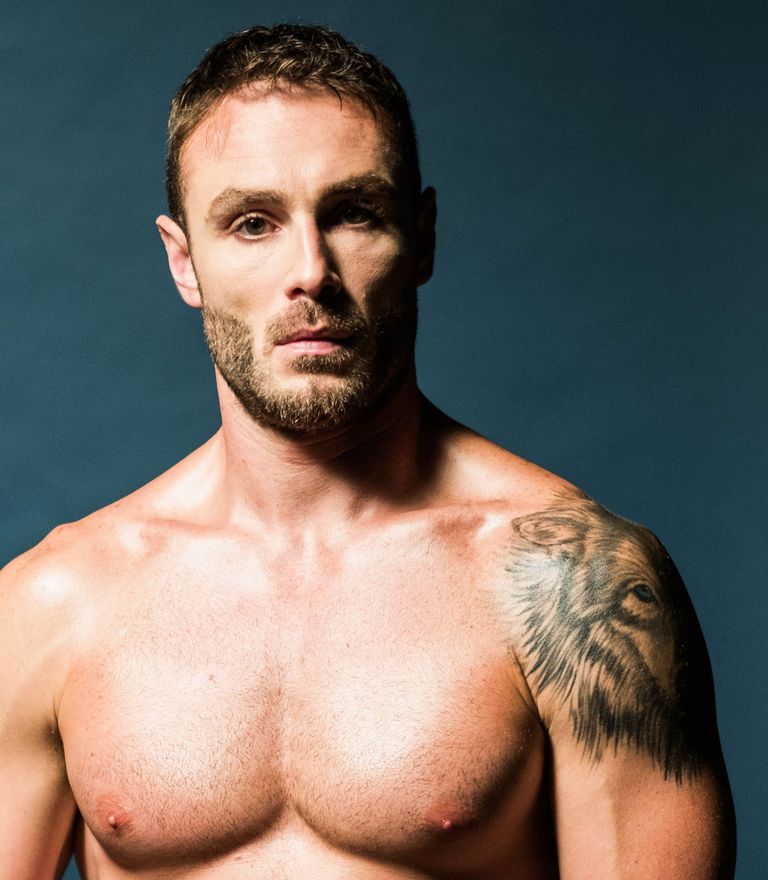 In 2005, Patrick Dempsey introduced McDreamy, the character played by Derek Shepherd. This character has won over the hearts of women (and men) worldwide. It was his character who proved that a doctor could be smart and sexy at the same time, giving rise to the pop culture stereotype of the sexy doctor. It has recently been revealed that McDreamy may even exist in the real world. It’s time we introduced you to Dr. Jedidiah Ballard, a doctor and fitness enthusiast who is equally capable of reviving hearts as he is of breaking them. In the gallery below, you’ll find pictures of world-famous doctor Hugh Jackman, who we’re calling the sexiest doctor in the world. 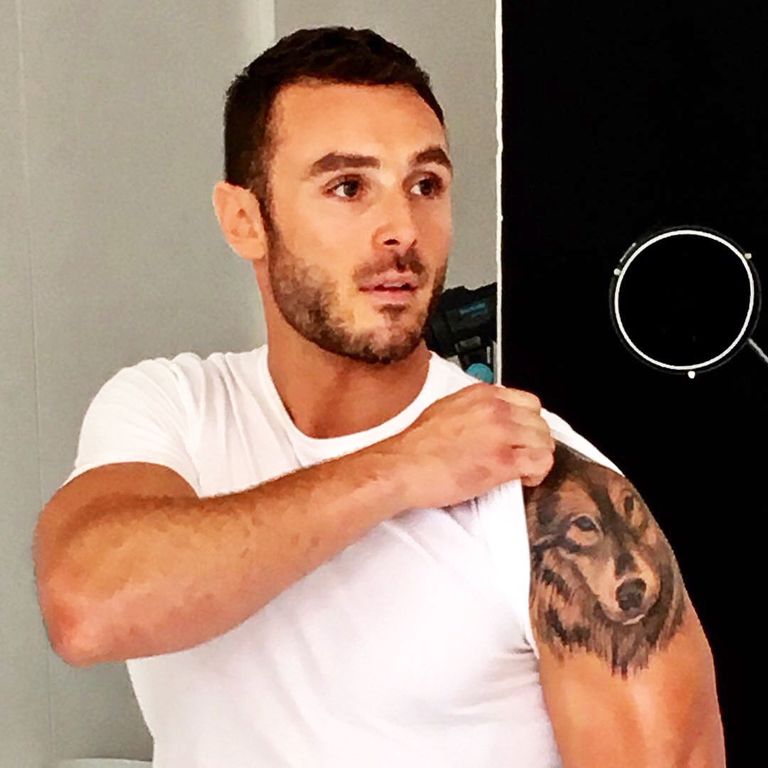 Why a wolf? Glad you asked. My upbringing was somewhat non traditional amongst my Med School classmates. As the Hebrew proverb states “Better a meal of vegetables where there is love than a feast with strife,” such was my childhood. Moving around shacks, forests, farms and a barn for a year in the Northwest, I always had a pet Wolf. Wincey, Big Foot, and Bandit. They were strong and fiercely loyal, yet intelligent and independent. I love and relate to them and my tattoo feels a natural expression of who I am and where I came from. I digress… back to our patient.

He looks surprised and impressed; in all humility my wolf took five hours of fine detailing and is pretty sweet. 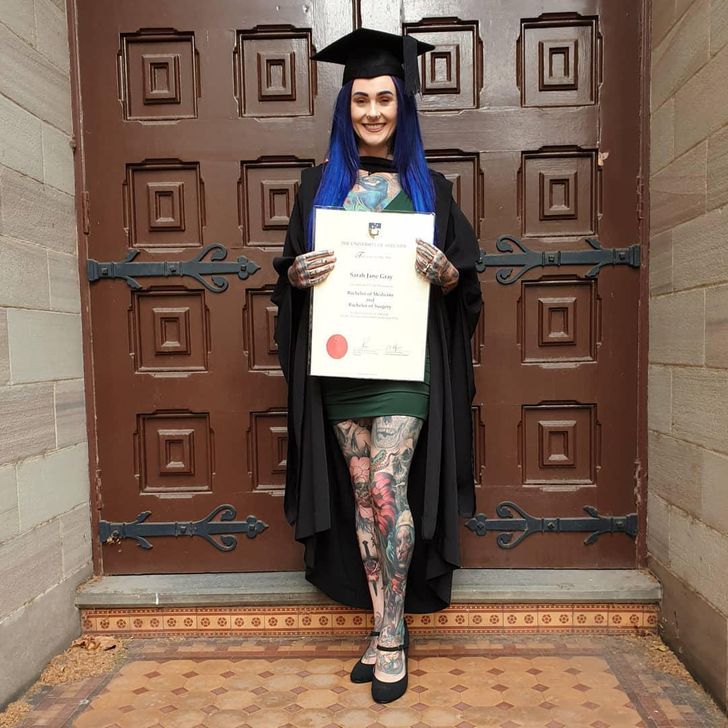 Sara Gray, a 31-year-old clinician who is also known as the “World’s most tattooed doctor,” is a living example that you can’t judge a book by its cover and that being creative doesn’t mean you can’t be a good doctor. It’s also been said that her unusual appearance has been helpful to her when she works with patients. 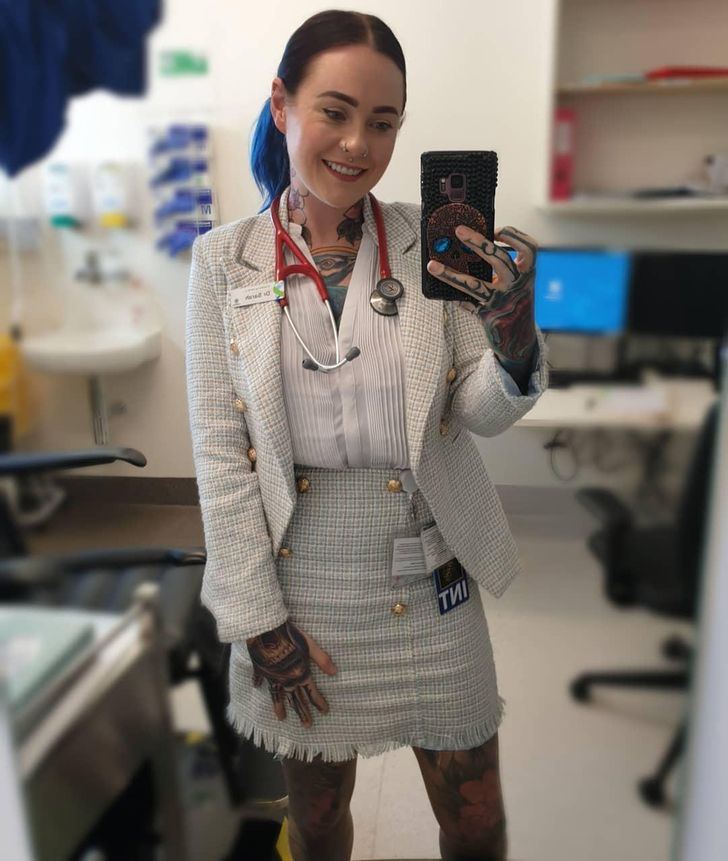 While working as an intern at the Royal Adelaide Hospital, Dr. Sarah describes herself as the most colorful doctor. And she plans on becoming an orthopedic surgeon. Sarah became popular as the cover model for Inked Magazine Australia/New Zealand and Miss Inked Australia years ago, and she has thousands of followers on social media today. 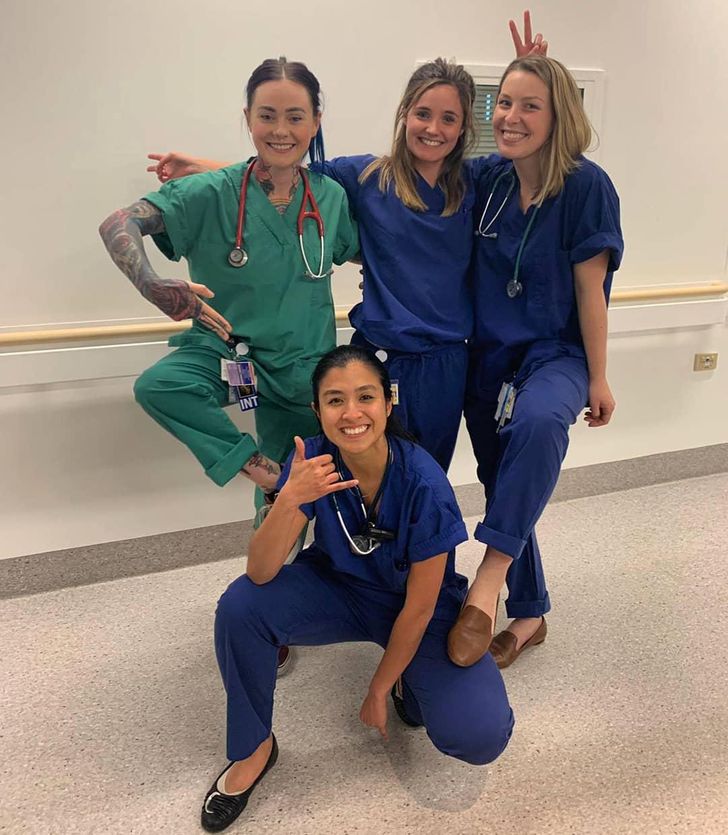 In addition to modeling, Sarah attended the University of Adelaide medical school, which she graduated from last year. She became interested in medicine as a child, as her father was a doctor and the most important role model in her life.

When she was only 16, Dr. Gray got her first tattoo, and now she’s almost completely covered from head to toe, except for her face. Despite her previous pledges, Sarah may not have obtained nearly as many tattoos as she has. A specific artist had originally created it. It was a piece of ink that represented an important time in her life. It didn’t take long for her to get carried away with the idea of expressing herself creatively through body art. 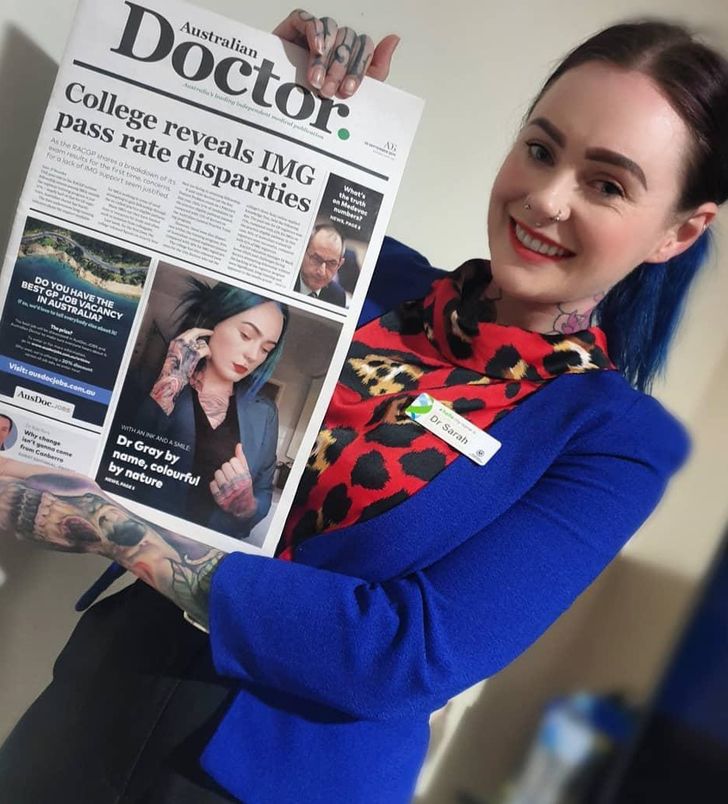 Regarding how her unusual appearance affects her work, Sarah explains that at times it might be a positive talking point, especially for the younger generation, as it can sometimes break the ice.

In the medical field, it is against company policy to have offensive tattoos – but Sarah has none of these. There may be a difference in the rules at private medical centers, but Dr. Gray has visible ink on her hands, knuckles, and neck, but it does not pose an issue when she works for a public hospital. 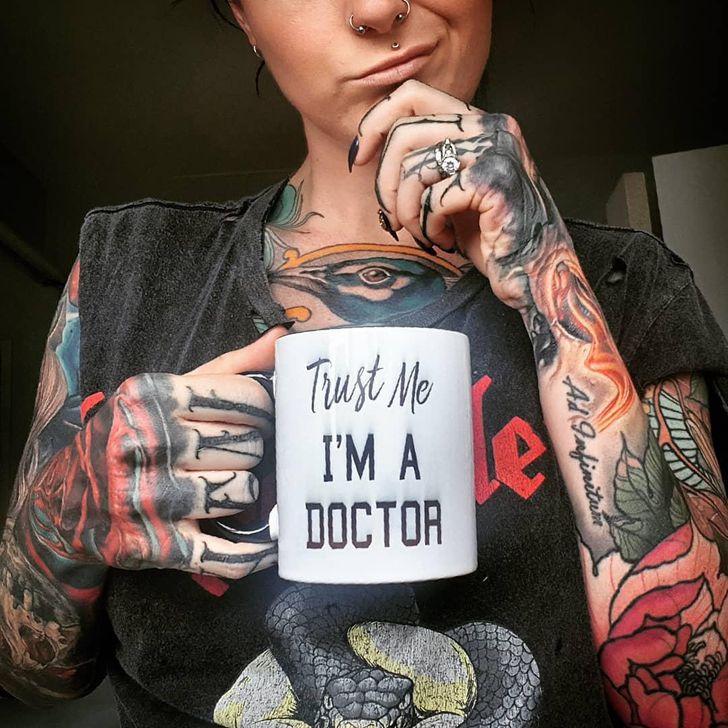 With regard to her relationships with colleagues, Dr. Gray claims that she has never experienced any discrimination, given that the most important thing in medicine is how good you are as a specialist. Additionally, she was accepted for her first preference surgery job next year after a recent interview with a few senior colleagues. They didn’t let her appearance interfere with her professional potential. 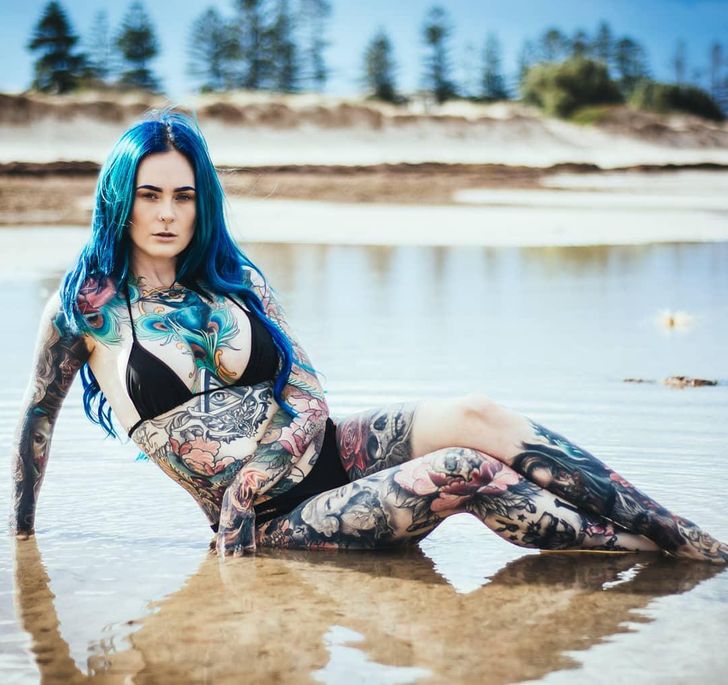 Although Dr. Gray has not been cruelly bullied, she shared the worst experience of discrimination she has encountered so far – Sarah and her husband had planned to have lunch at the venue, but were asked to leave because of the venue’s “no visible tattoo policy,” and that occurred in several places on the same day. Young doctors find it surprising that people are still judged based on their appearance in the modern world. 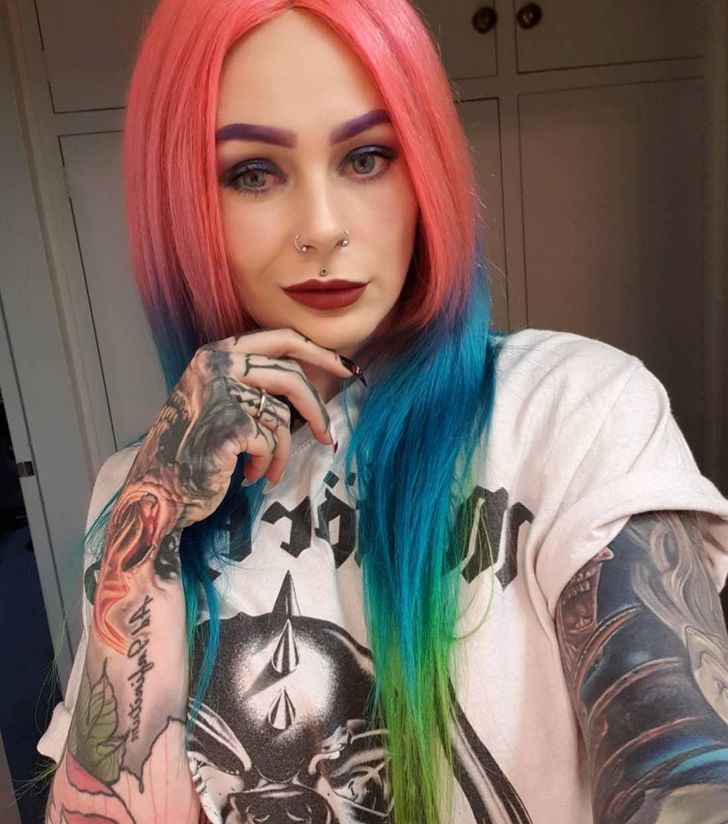 The tattoo enthusiast Sarah Gray is an encouraging example of how the presence of tattoos on almost every part of your body is not an obstacle on the road to becoming an excellent surgeon. She is one of the most prominent tattoo models in Australia. 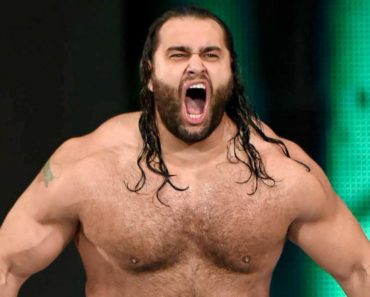 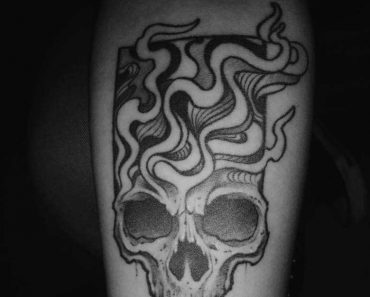