Scottie Jordan Wilbekin, the famous American professional basketball player is known to have begun his youth career during his college days. His first team was “Florida Gators”. Scottie, as he is known amongst his friends and followers, is a huge tattoo lover. He has got ample tattoos on his body. Let us see what they are and what meanings do they have for him. 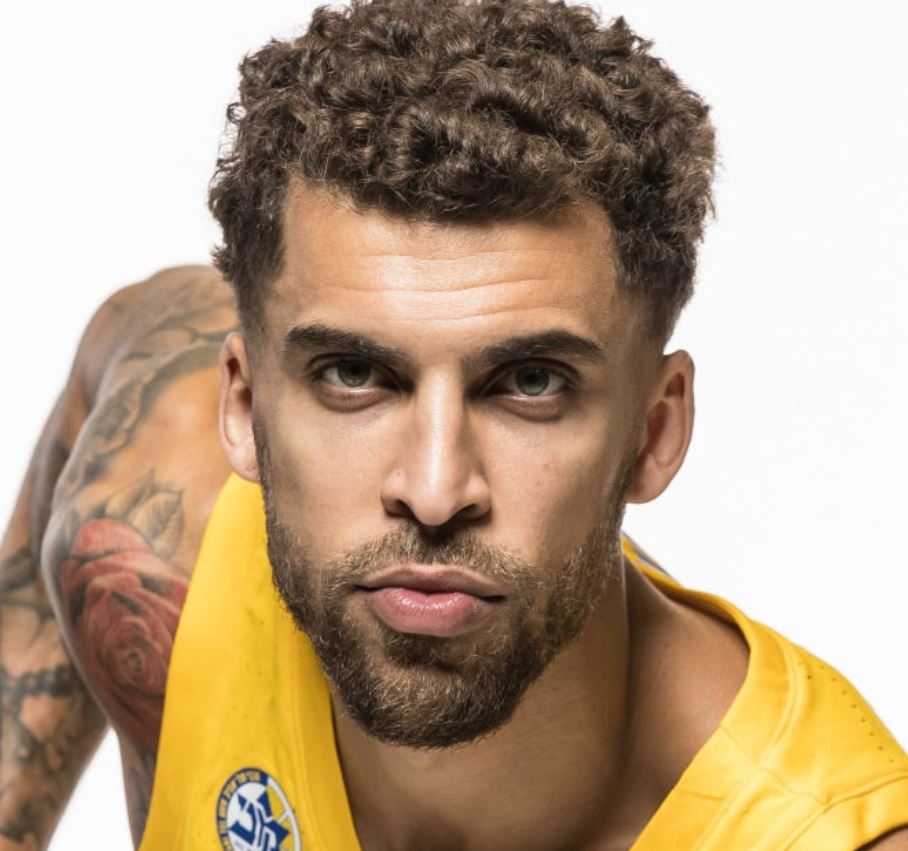 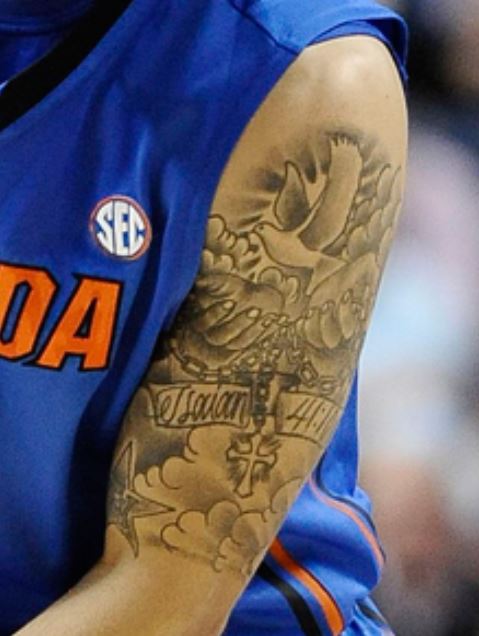 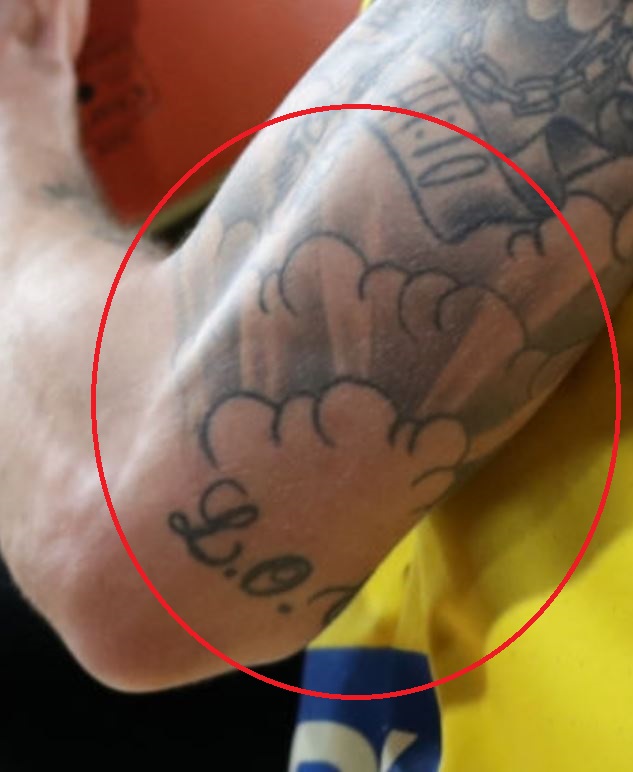 Tattoo: On the outer side of his left bicep, there are dark clouds tattooed along with some acronym. 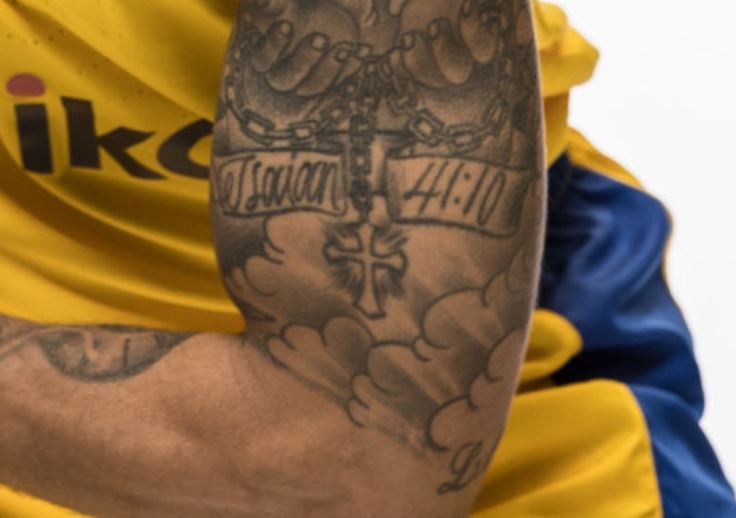 Tattoo: On Scottie’s left bicep there is a cross pendant and a necklace inked, along with a banner. The words inside the banner can be read as ‘Isaiah 41:10‘. Also, just below the pigeon tattoo, there are open praying hands chained and surrounded by a necklace with a cross pendant.

Meaning: The cross is the Holy symbol of Christians and this represents Scottie’s religious beliefs i.e.e Christianity. Whereas, ‘Isaiah 41:10‘ is one of the proverbs mentioned as the part of the Book of Isaiah and the Holy book of Christians i.e. ‘The Bible’ and it means,

“Fear not, for I am with you; Be not dismayed, for I am your God. I will strengthen you, Yes, I will help you, I will uphold you with My righteous right hand“

The chained praying hands are the symbol of religious devotion and dedication towards God and the desperation to seek his blessings. 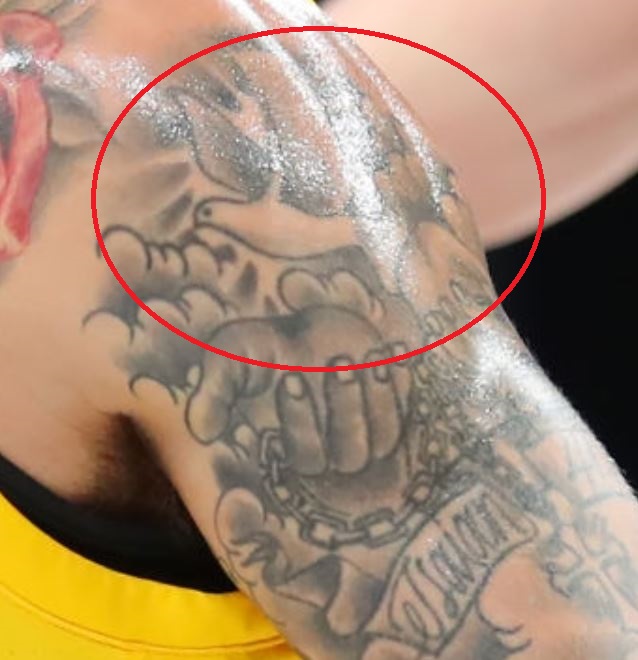 Tattoo: There is a flying pigeon inked on Scottie’s left shoulder along with the clouds that seem to give it a ground.

Meaning: Pigeon is the symbol of love and sacrifice. 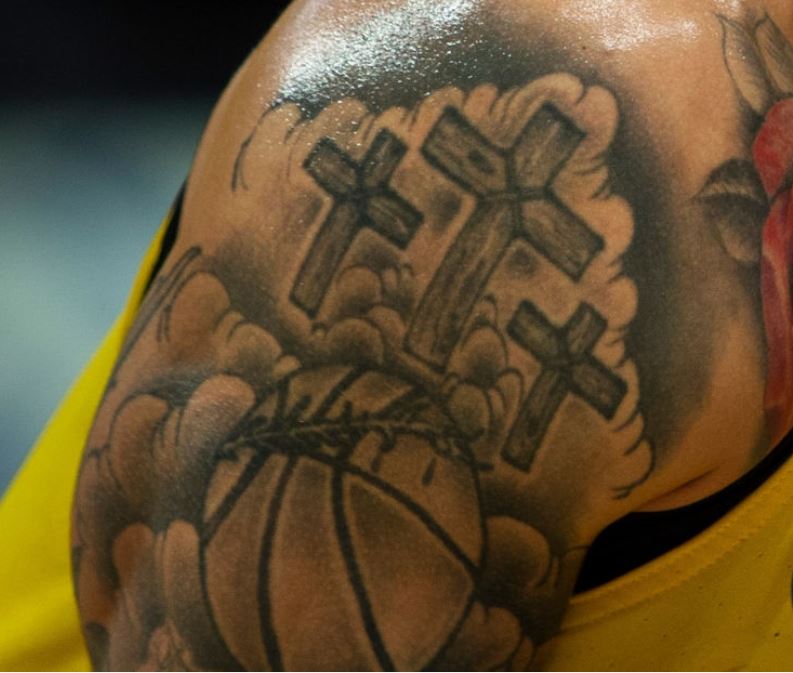 Tattoo: On Scottie’s right bicep there is a beautiful tattoo that includes three crosses along with a Basketball tattoo. There are dark clouds and patterns surrounding the Basketball.

Meaning: The three crosses are an important symbol in the Christian faith. They represent the three aspects of God i.e. the Father, Son, and Holy Spirit. However, most people also believe it to be the symbol of three people i.e. ‘Jesus Christ’ and the other two men who were crucified along with him at Golgotha. The whole idea behind this tattoo is Scottie’s strong belief and faith in Jesus Christ and a tribute to his humanity and thus, by this, he wishes to seek good luck and his blessings when he plays his game (represented through Basketball) on the field against his enemies. For many Christians, the latter is a way to remember the humanity of Jesus. 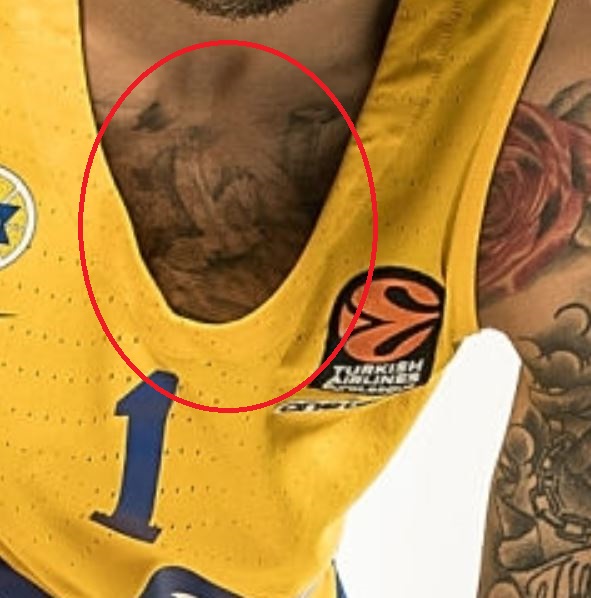 Meaning: The flying dove is the symbol of victory, love, peace, and happiness. Also, they represent the fresh beginnings and victory over evil. Scottie must have also got it to symbolize an important start or to mark the beginning of some important event in his life. 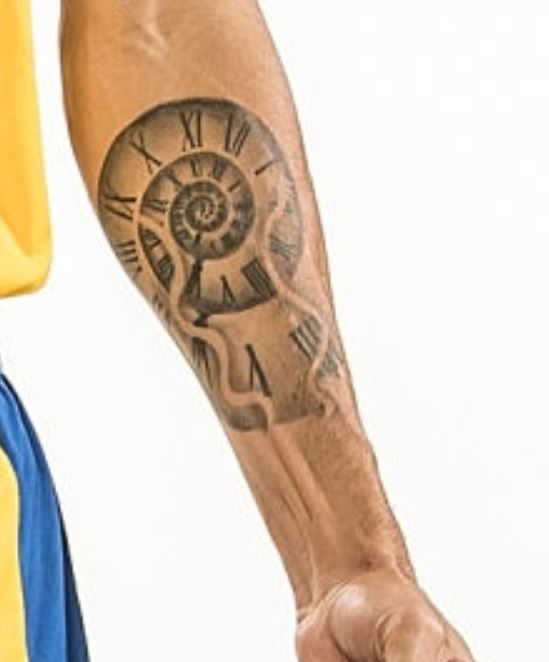 Tattoo: Scottie has got an intricate spiral clock inked on the inner side of his left forearm.

Meaning: The clock is the symbol of life and death. A clock tattoo is the most common way of memorizing an event in your life that is closest to your heart. It is a continuous reminder to ourselves about the current time and our position in life and where we wish to reach in our future.

Tattoo: On his right forearm there is a beautifully done magnifying glass along with the rosary beads tattoo. Also, we can see the ma inked in the background.

Meaning: The magnifying glass is the symbol of dedication, diligence, and rationalism. Rosary beads are the symbol of keeping away evil and bad luck. the rosary itself represents Virgin Mary. Thus, this is another proof of the fact that Scottie is a great believer in Jesus and Mary and their blessings. The complete tattoo is the way of being truthful in life and making sure that you move on the right track always. 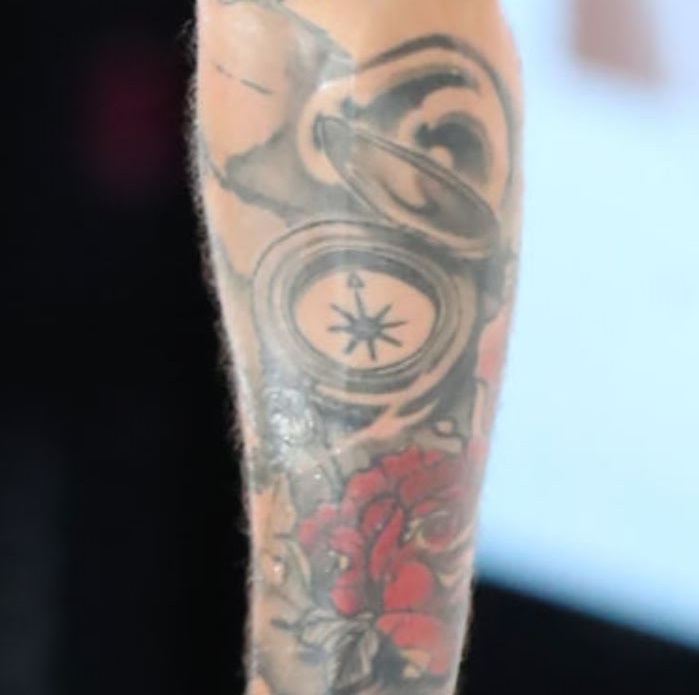 Tattoo: There is a compass along with pair of roses, tattooed on the inner side of Scottie’s arm.

Meaning: Compass, map, and roses are a good combo when it comes to choosing an elegant ink for a boy. Here, the compass is the way of directing our life whereas the rose, is the symbol of love and romance. Thus, the tattoo represents the power of love to guide and direct you throughout your life. 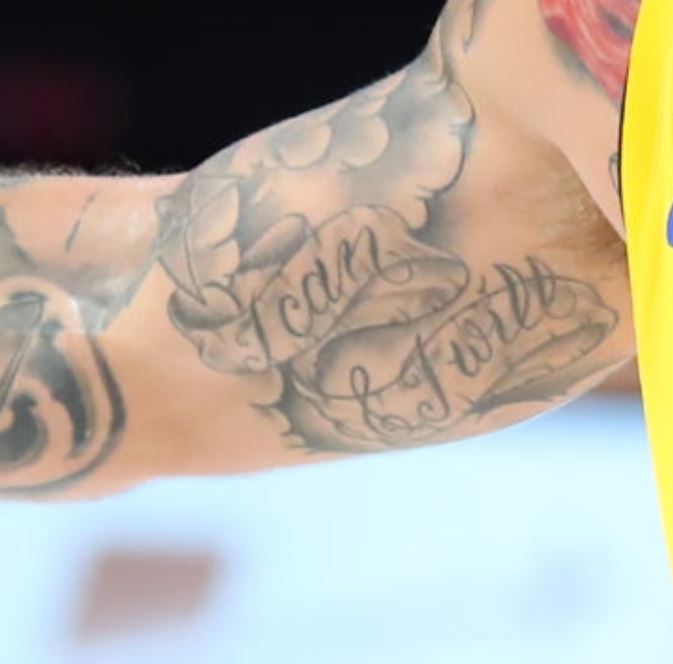 Tattoo: Wilbekin’s right inner bicep is inked with a very motivating phrase that says, ‘I can & I will’.

“This is my continuous source of motivation in life. Keep me going!!” 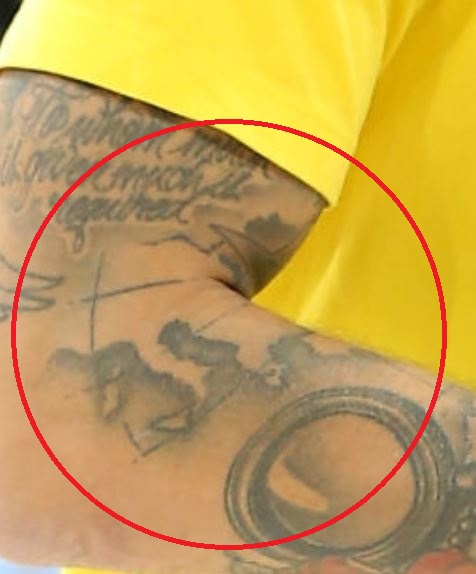 Tattoo: There is a big map inked on his right forearm that covered his compass tattoo, as a background. As already explained, compass and map are another way of leading and directing your own life. The tattoo tells us about the independent nature of Scottie and how he years to lead his life, ‘his own way’. 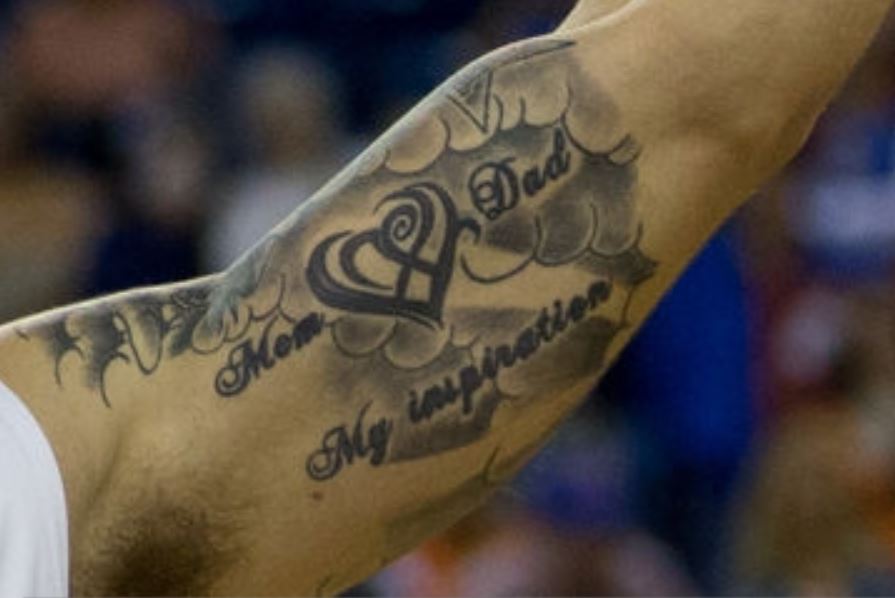 Tattoo: There is a tattoo on his inner left bicep that says, Mom Dad my inspiration’ along with a stylish heart inked between Mom and Dad. The tattoo is his tribute to his love for his parents.

“I owe them everything that I own today in my life”. 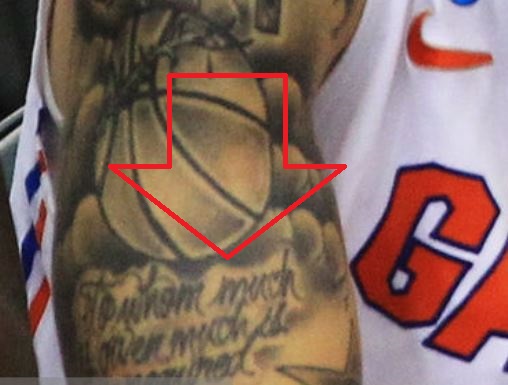 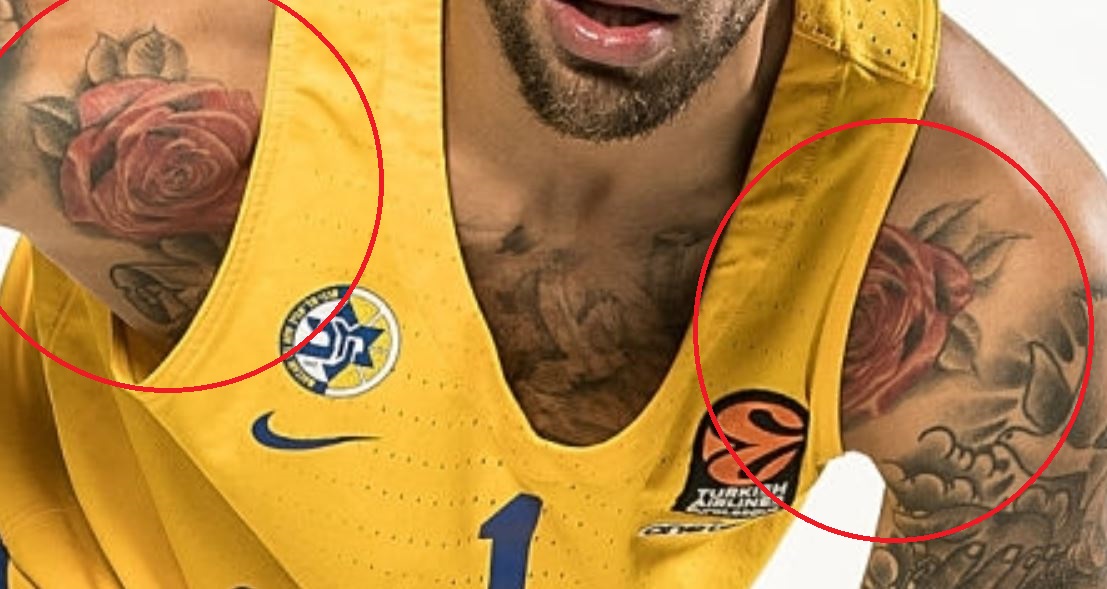 Tattoo: Scottie has got red roses inked on his shoulders as one on each side.

Meaning: Rose is the symbol of love, romance, and affection. 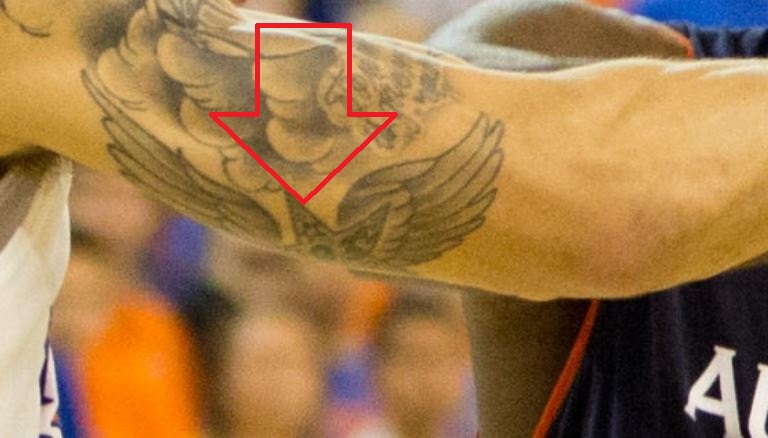 Tattoo: There is a star with angel wings inked on the backside of Scottie’s left upper arm.

Meaning: Star with angel wings is the way of memorizing someone close to your heart who is no more in the world.

Meaning: Stars are the symbol of guidance, love, and hope in life. The letters here represent the initials of Scottie’s full name i.e. ‘S and W‘ for Scottie Wilbekin. 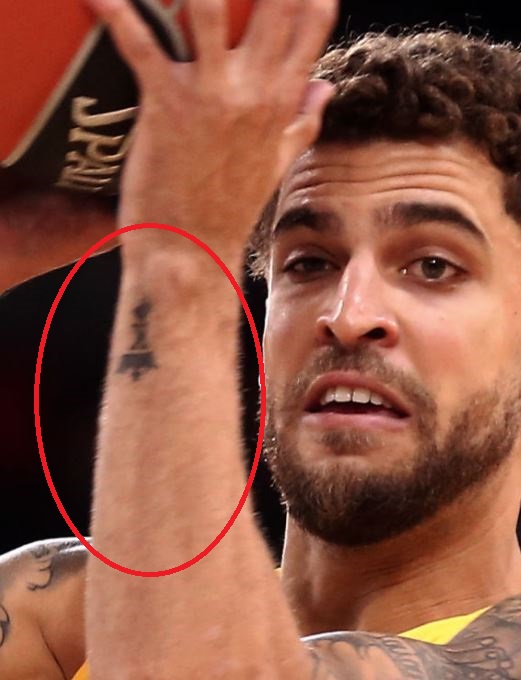 Tattoo: Letter ‘K’ with a tiny crown is tattooed on Scottie’s left forearm. 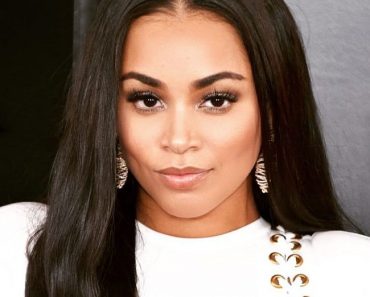