Andrew Douglas Rea is an American filmmaker and cookbook author. He is best known for his YouTube cooking channel, Babish Culinary Universe where he recreates traditional recipes as well as the recipes of the food found in movies, video games, television, etc. 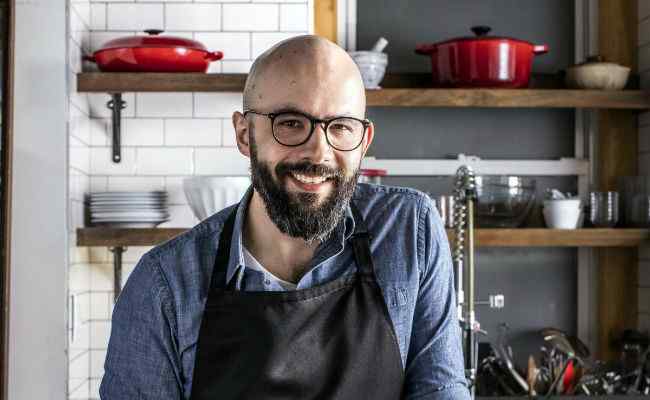 Andrew has some interesting inks on his body. Let us take a look at them and the meanings behind them.

Tattoo: The back of his left upper arm has an infinity loop logo tattooed on it with four words tattooed around the loop. The words are, “Breadsticks, Soup, and Salad”

Meaning: He explained the tattoo in his book, saying it was a parody on Live Laugh Love/infinity symbol sorority girl tattoos, and Olive Garden’s endless soup, salad, and breadsticks. He came up with the funny idea and just decided to get it tattooed. 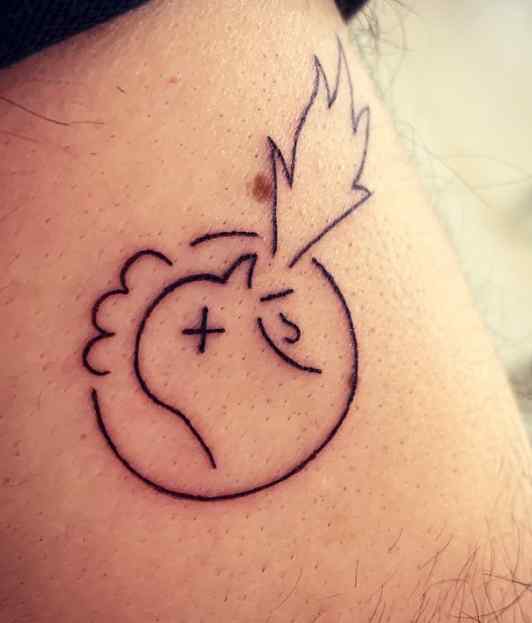 Tattoo: The left upper arm of the cook also has a tiny design on it of a chicken breathing out fire.

Meaning: The tattoo design comes from Chinese culture and is known as Basan (Fire breathing chicken). He posted the tattoo on his Instagram with the caption, “We christened him “Drew” – thanks @chrisjtattoo” 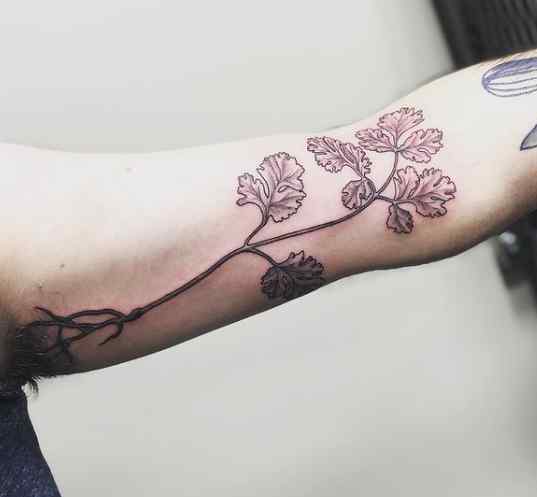 Tattoo: Andrew’s left bicep has a tattoo of a floral design on it.

Meaning: The tattoo is not actually a floral design but cilantro. He got it growing out of his armpit as he does not like to use it. He posted the tattoo on his Instagram saying, “Thanks @elemags @soho.ink for the sweet new foliage! Yes, that’s cilantro. Yes, it’s growing out of my armpit. Yes, those are my feelings toward cilantro.” 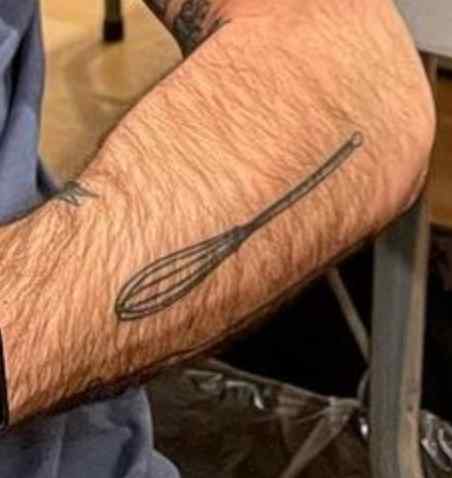 Tattoo: The upper part of his left forearm has a tattoo of a whisker on it.

Meaning: The tattoo of the whisker represents his love for cooking. There is another whisker tattooed on his arm too. 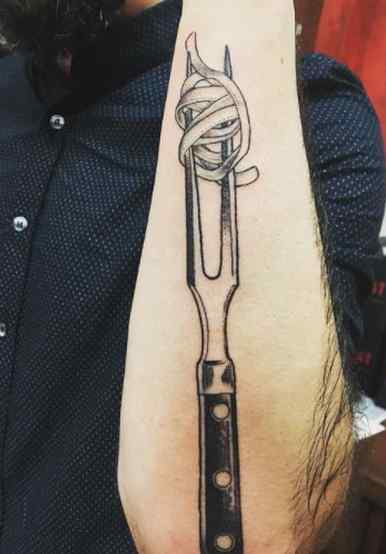 Tattoo: The lower side of his left forearm has a tattoo of a carving fork on it with spaghetti wrapped around its prongs. 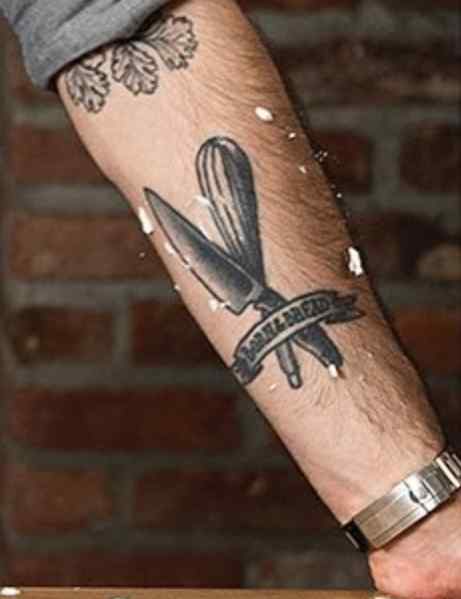 Tattoo: The inside of his left forearm has a tattoo of a knife along with a whisker on it. The tattoo design also has a banner tattooed with it that reads, “BORN & BREAD”

Meaning: Andrew revealed that this is the first tattoo that he got. He argued a lot with his significant other at the time and finally got this tattoo. The tattoo represents “a reminder to be true to yourself” and the banner reads the name of his fantasy bakery, Born & Bread. 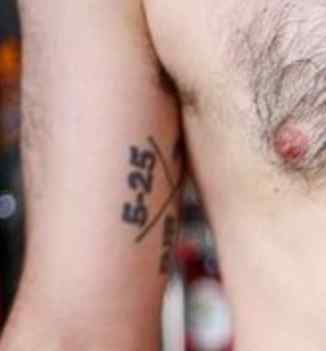 Tattoo: There is a tattoo of the FEMA markings or the Katrina Code tattooed on his right bicep. The X codes were spray-painted on houses in the wake of the Hurricane.

Meaning: The tattoo is a tribute to the city of New Orleans, his favorite city. 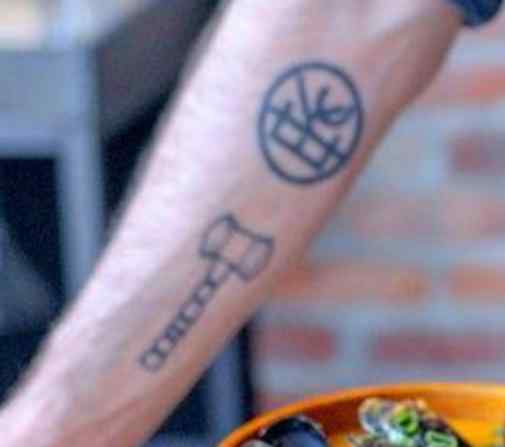 Tattoo: There is a tattoo of a hammer, along with a circular symbol on the inside of his right forearm.

Meaning: The tattoo represents his alias, Oliver Babish. He posted the tattoo on Instagram with the caption, “Justice is served” – my little tribute to the original Oliver Babish“.

The symbol above the hammer is the original logo of the Kodak company and a tribute to his hometown. He said, “it’s a homage to my hometown (Rochester), and a reminder to stay relevant, unlike an unnamed multinational corporation that refused to embrace the digital camera.” 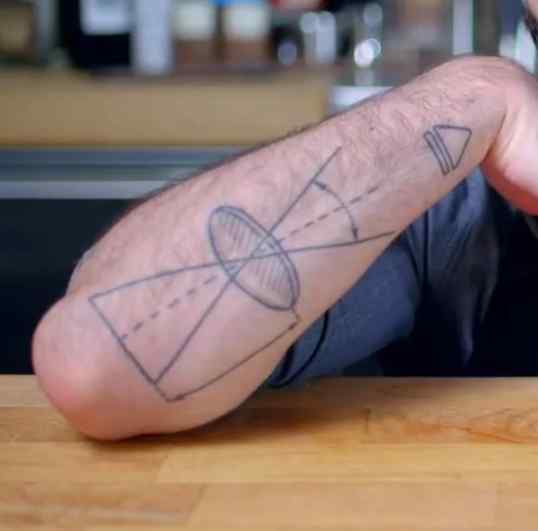 Meaning: The tattoo of the arrow was explained by his in his Instagram post that said, “Decided to get a “frame forward” symbol from my editing days tatted here in New Orleans, representing how important it is to be detail-oriented and keep examining my work one frame at a time…I then realized that it also looks like the eject button on a DVD player. The unintentional irony is, just, delicious.”

The tattoo of the geometrical design is a diagram of the focal length of a lens. He got this tattoo because he went to film school and is a filmmaker as well. 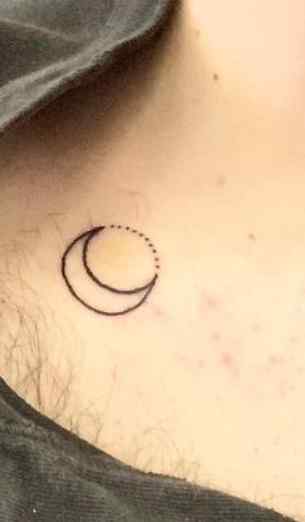 Tattoo: There is a tattoo of a crescent moon along with a dotted line to represent a full one on the right side of his chest.

Meaning: This is a matching tattoo that he got with his friend, Jessica Opon, who got a kitty face tattooed on the side of her wrist. 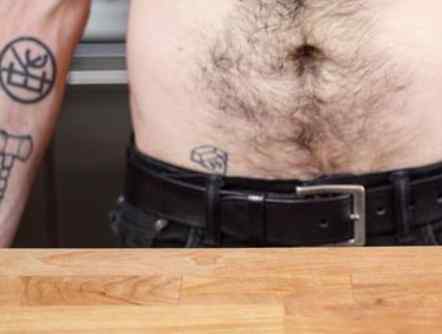 Tattoo: There is a small diamond tattooed on his waistline. 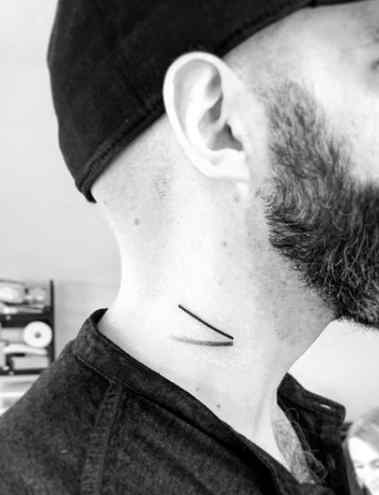 Tattoo: Andrew has a tattoo of two lines tattooed on the right side of his neck.

Meaning: The tattoo is inspired by one of his favorite operas, Einstein on the Beach.

He has another tattoo of the skyline of the city of Seattle on the back of his right upper arm. He said, “Rear bicep is the Seattle skyline, a city that I’ve never even been to because I love a little show called Frasier.” 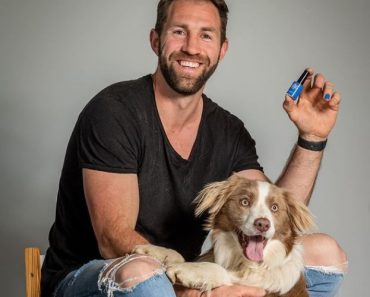