Dale Mehmet, a famous model with a blended nationality gained all the limelight when he participated in season 7 of Love Island. By profession, he is a hairstylist and has shared the fact that he learned the skills by watching other barbers and learning under a few over a span of few years. Dale has collaborated with big brands starring Recharge Apparel, Faux Amour, and Adenosine as a model. Dale has got some amazing tattoos that adorn his top body. Let us explore them. 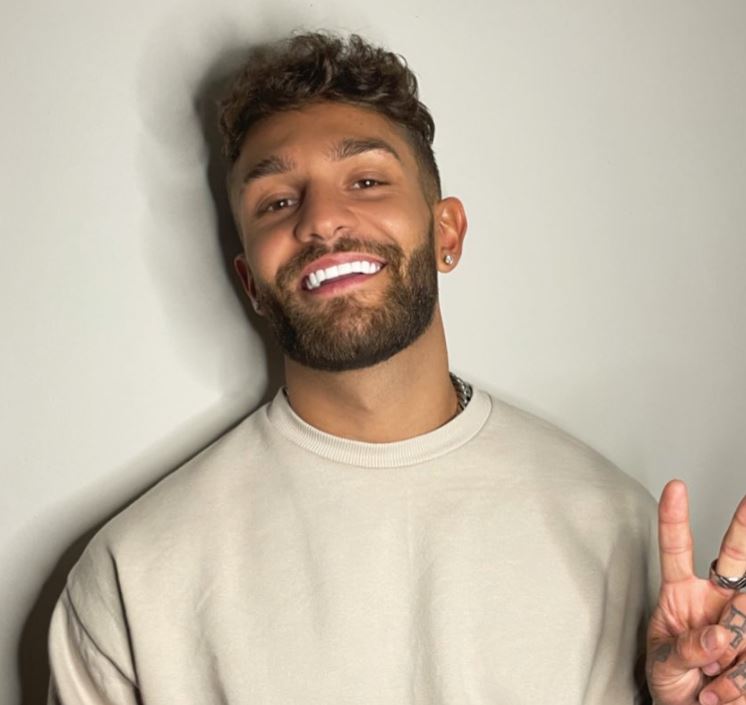 “And I’m a massive geek. I love sci-fi movies, I love gaming, I love watching anime. I have a full anime sleeve, that’s how much I like it, I’ve got it tattooed on my body. I really like Japanese culture.”

Tattoo: Near his shoulder blades, Dale has got the numbers ’19’ AND ’96’ inked across the right and the left shoulder, respectively.

2. Tattoo design on the back 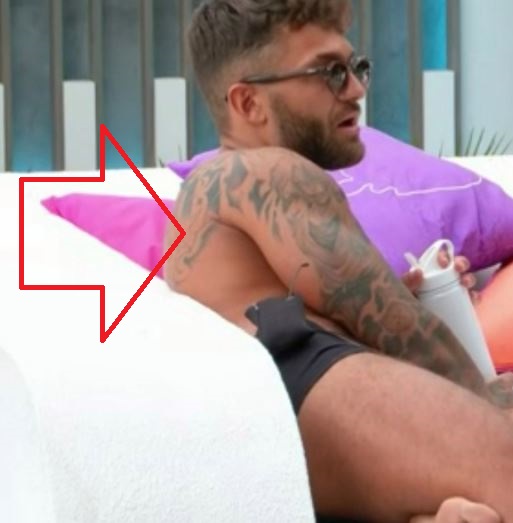 Tattoo: Dale’s upper back portion is covered with some design that covers the major portion of his upper right back and goes up to his shoulder and the front. 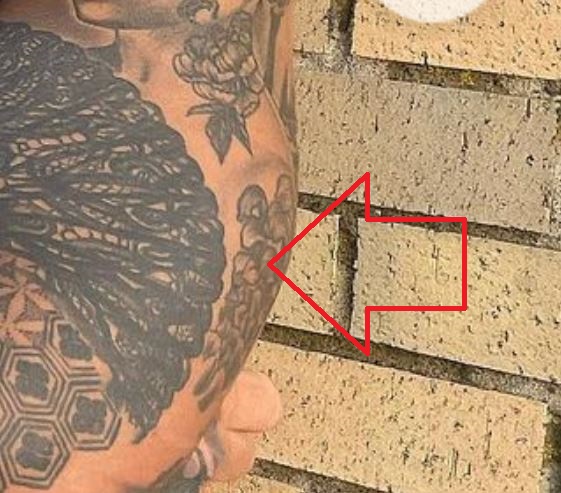 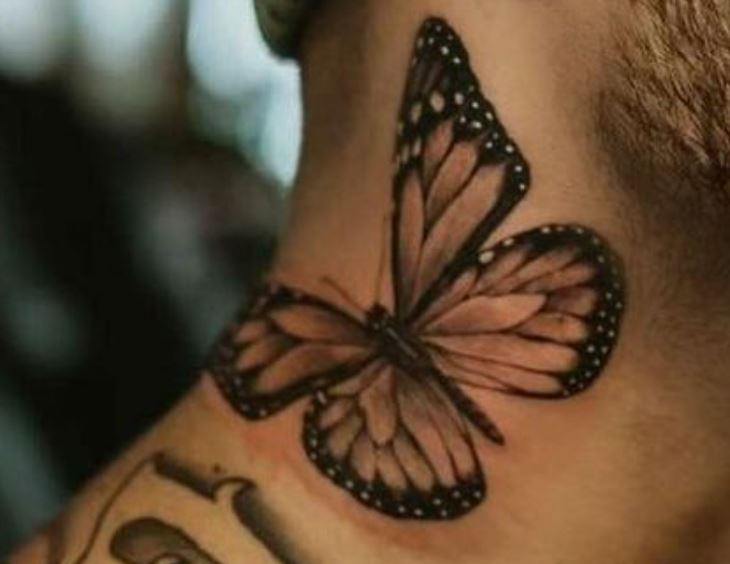 Tattoo: Towards the right side of his neck, Dale has got a beautiful butterfly tattooed.

Meaning: Butterfly is the symbol of young love. It is believed to represent the romantic side of the wearer. Just like the butterfly flies among the flowers similarly, the young blood is believed to wander around his social life spreading and sharing love. Butterfly tattoo also stands for joy, happiness, delicate beauty, and a symbol of rebirth and resurrection. Some people get this tattoo to represent the beginning of a new phase in their life i.e. to mark a new journey.

Dale got this tattoo while being live on YouTube by Abi. i.e. her co-star, fellow islander, Abigail Rawlings. 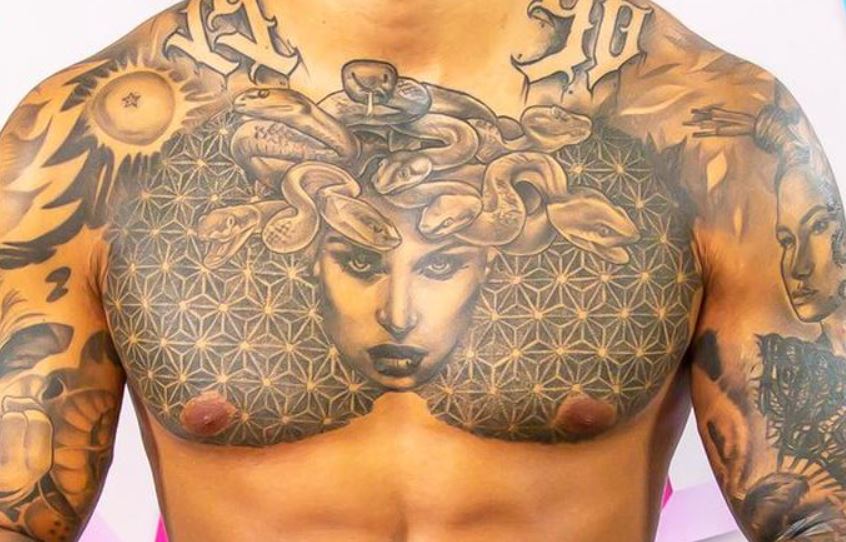 Tattoo: Covering the major portion of his chest is the tattoo of the iconic, ‘Medusa’.

Meaning: As per Ancient Greek Mythology, Medusa also known as the Gorgo, was one of the three Gorgons who were described as monstrous. They were believed to be winged human females who used to live with living venomous snakes in the place of their hair. Those who looked into her eyes would turn into stone. Medusa’s tattoo is used to deter all sorts of threats from approaching you. More specifically, she represents female power, transformation, and freedom. She is believed to ward off the evil and negativity away from the wearer of the tattoo. 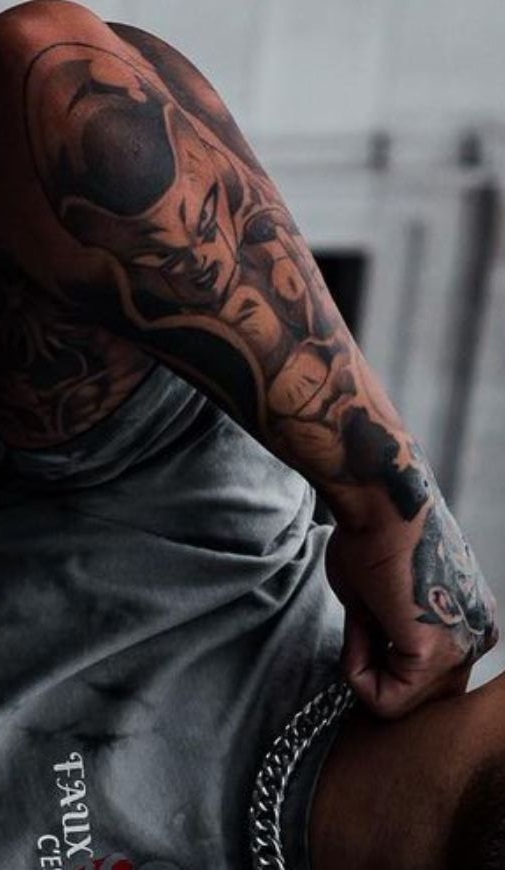 Meaning: It actually represents Piccolo, an alien from the planet Namek, who is a rival-turned friend of the main character of the series i.e. GOKU. 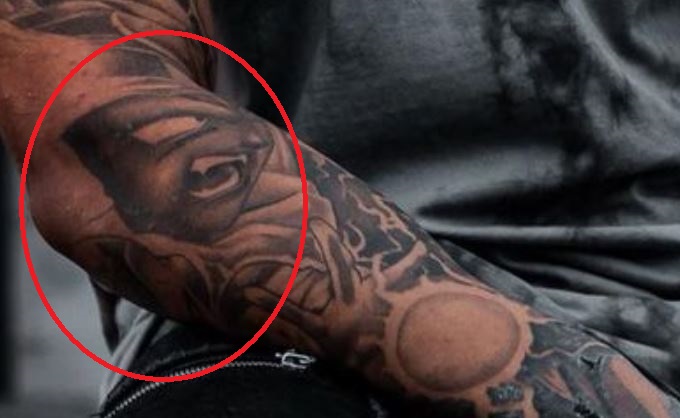 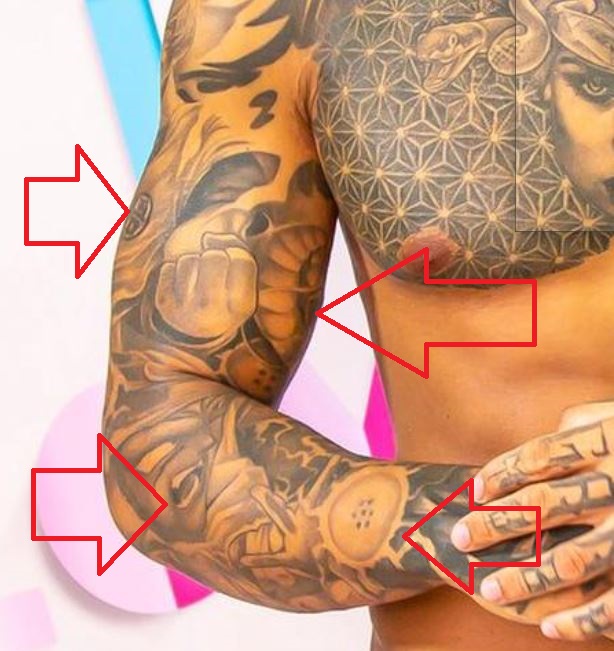 Tattoo: His right arm is covered with multiple dragon ball tattoos which are magical in nature and when combined and used, help summon a dragon that you have wished for. Also, there is a tattoo of the Shenron dragon on his right arm. 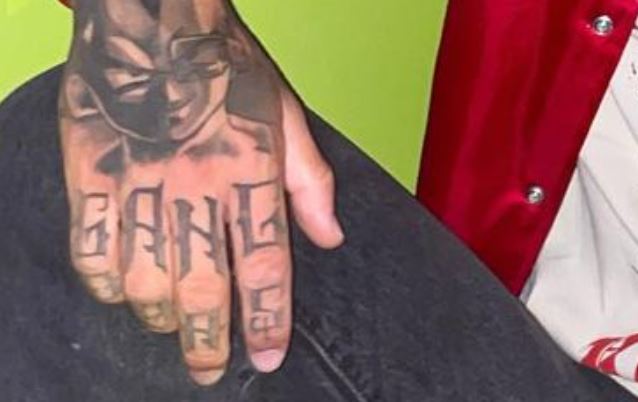 Tattoo: On his right hand’s fingers, Dale has got the word, ‘GANG’ tattooed.

Across his fingers, Dale has got the words, ‘GANG GAND’ inked on his both hands. 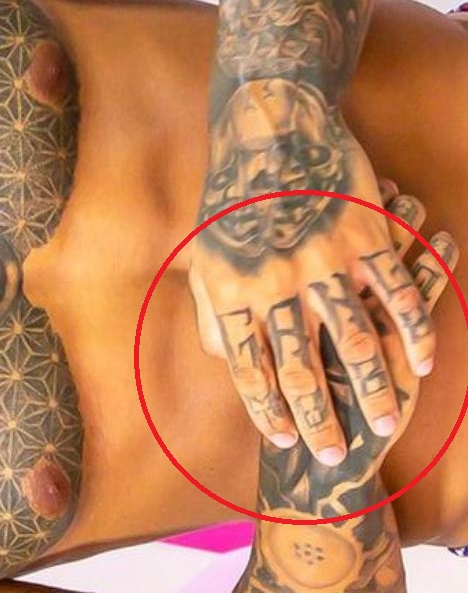 Tattoo: His left-hand fingers are also linked with the word, ‘GANG’ along with the numbers ‘M888’.

9. Split Faces on the left hand 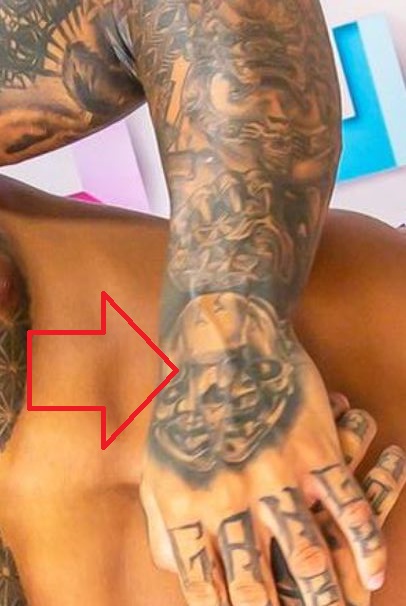 Meaning: The demon face is considered to be the symbol of fear, and scare. It can also be used to depict the rebellious and mischievous personality of the wearer. This split demon face on Dale’s body is actually the Japanese demon which is symbolic of the unshackled masculine power and strength. 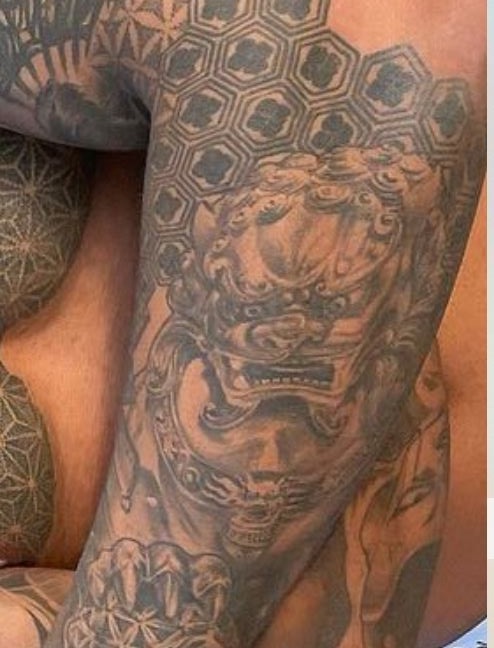 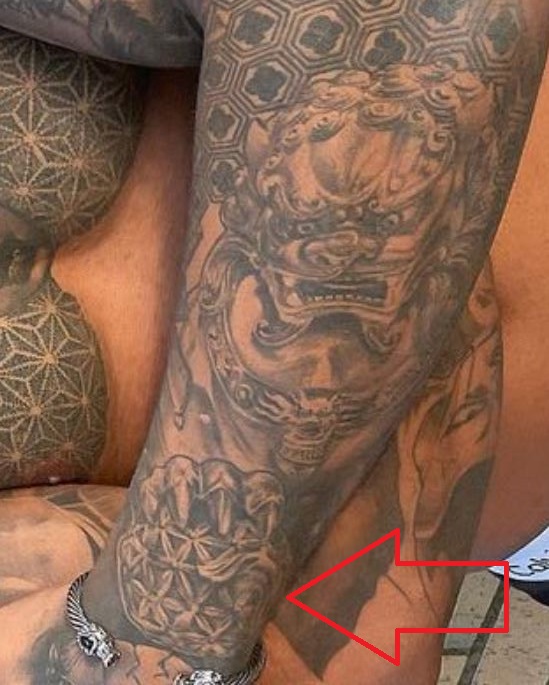 Tattoo: There is a big tattoo of a Japanese dragon-Shenron dragon inked on Dale’s left arm. Below the dragon, there is a claw-inked inked near Dale’s left wrist. 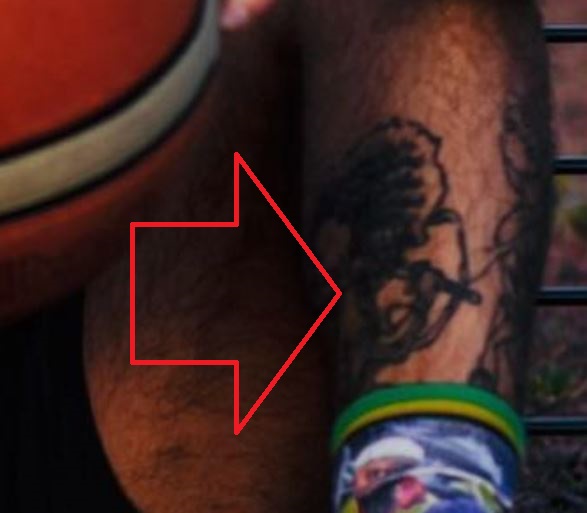 Tattoo: On the inner side of his left bicep, Dale has got the tattoo of the panda inked. 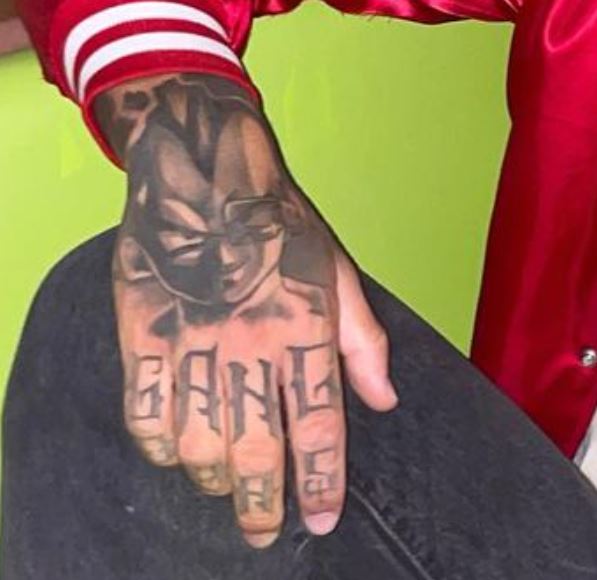 Tattoo: His right hand is covered with the face of Vegeta.

He is another fictional character of the Dragon Ball Z series. Vegeta is the prince of the fallen Saiyan race and the eldest son of King Vegeta. 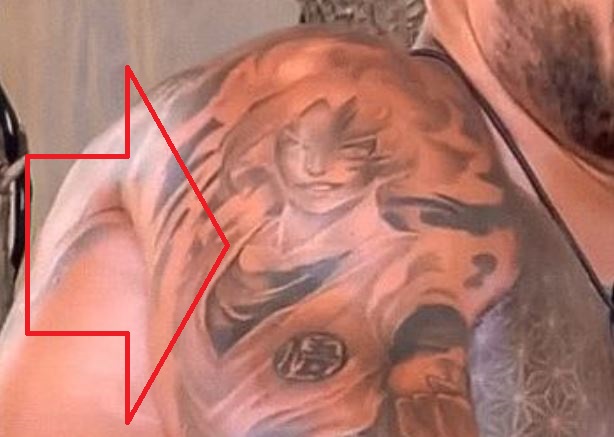 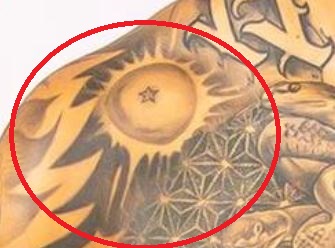 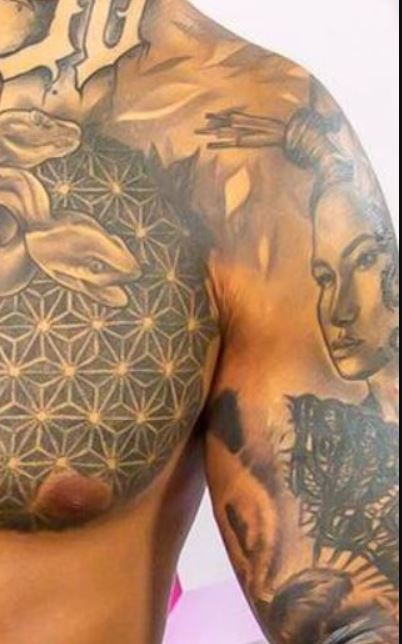 Tattoo: There is a geisha tattooed on Dale’s left bicep.

Meaning: Geisha, the symbol of beauty, feminism, and mystery is the art of Japanese Culture. Geisha is actually symbolic of a woman who is beautiful, artistic, and perfect in all senses. They are the perfect symbolism of gracefulness and discipline as per the Japanese culture and beliefs. Their clothing i.e. Geisha Kimono is made in intricate design with no body revelation at all. 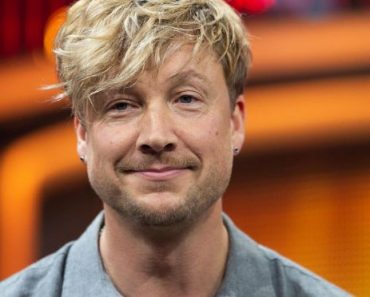 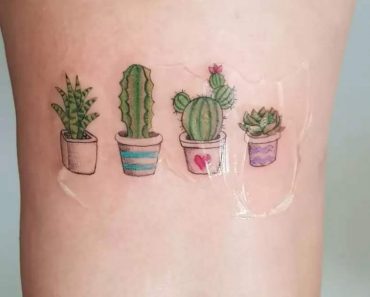 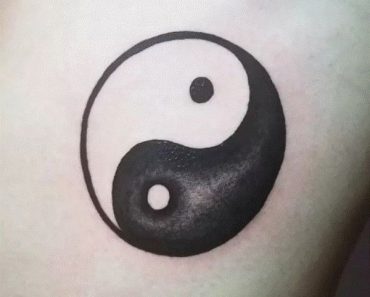 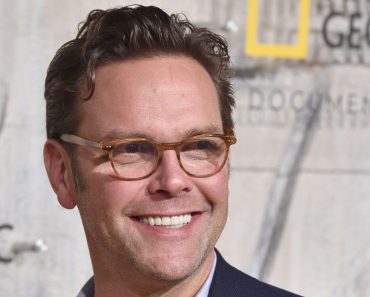