Adam Joseph Copeland popularly known as Edge is a Canadian professional wrestler and an actor. Edge is one of the most decorated wrestlers of the WWE League. Edge, a WWE Hall of Fame winner, is the multi-time World Heavyweight and WWE Champion, former Money in the Bank winner. He made entry into the WWE in January 2020 after he was retired after WrestleMania XXVII because of a very serious injury. Edge has multiple inks on his body, however they all relate to one or the other important events of his wrestling career. Let us explore his body inks and see what meaning do they hold for him. 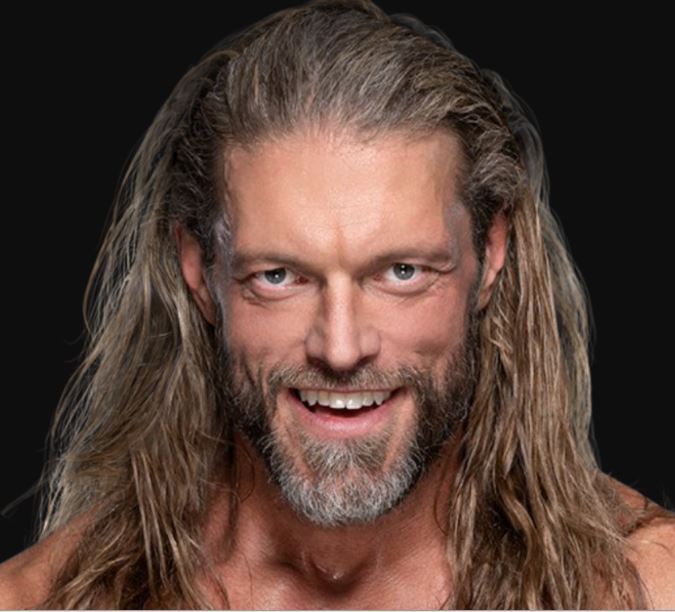 “Every tattoo on my body symbolizes a phase in my career.”

“When my career is done I’ll have a story to tell on my body.”
“My tattoos are the story of my adult-professional life without saying ‘Edge’ or ‘The Rated-R Superstar’ anywhere. My tattoos cover the time from when I was 17 until now.” 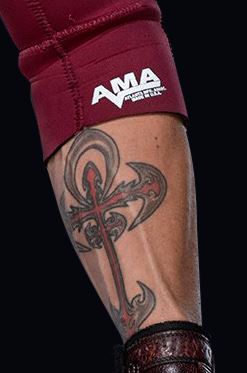 Tattoo: There is a huge red and black-colored cross tattooed on Edge’s left forearm.

Meaning: Cross symbolizes the person’s religious beliefs and faith. This tattoo tells us about Edge’s religious connections, i.e. Christianity. He claims to have got this tattoo during the early days of the beginning of his wrestling career when he was a member of the group, ‘Infamous Brood’.

“The Brood cross is a throwback to the beginning of my WWE career.” 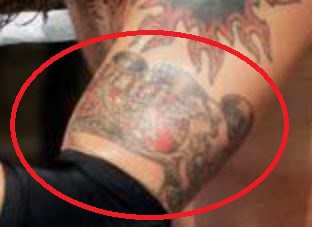 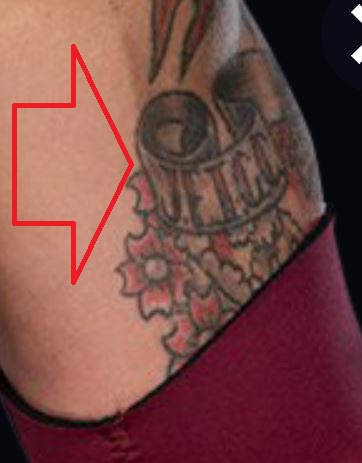 Tattoo: On his left bicep there is a tattoo of some tribal design along with small red flowers. Above it lies a banner which carries the word, ‘J.E.I.C.C’. 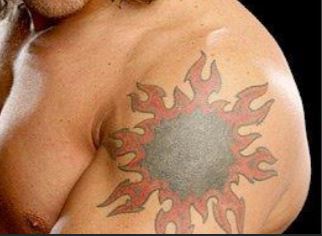 Tattoo: On Edge’s left shoulder we can see a tribal sun tattoo. This tattoo is the coverup of his first tattoo which he got at 17 and it was a shark. Edge got it covered up with the sun after his injury in the neck when he had to retire from his wrestling career.

At age 17, I got my first tattoo. Don’t bother looking for it now, though; I replaced it with the black sun that’s spread across my left shoulder.

“Two friends and I got tattoos of unique animals,” he explained. “My one friend got a bulldog, my other friend got a bull and then I got a shark. Two years later there was a cartoon called Street Sharks and by happenstance it looked eerily reminiscent of my tattoo. Actually, it was identical.”

“What I did was have the sun was on my tights and boots for the first half of my career to replace the shark; I guess the sun represents what I did back then — lo— toward brighter days,” he said with a shrug. 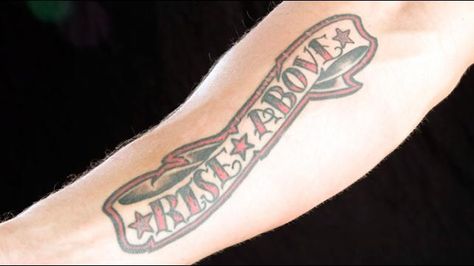 Tattoo: Edge’s right forearm contains a very impressive ink which shows us a red and black outlined scroll. It carries the words inside it which say, ‘*RISE*ABOVE*’.

Meaning: Edge got this tattoo as per his decision to have a reminder upon himself to rise above all the weaknesses and setbacks that he suffers daily in his personal or professional life. He wanted to have a banner with ‘RISE ABOVE’ or ‘PERSEVERE’, but he got RISE ABOVE inked.

“The last one, I’m thinking, would be a banner that reads ‘Persevere,'” he said. “It’s my stance on how I deal with things in life. Every time I get an injury or suffer from a personal setback, that’s exactly what I do, I persevere. It’s that or ‘Rise Above,’ as opposed to persevere through it.” 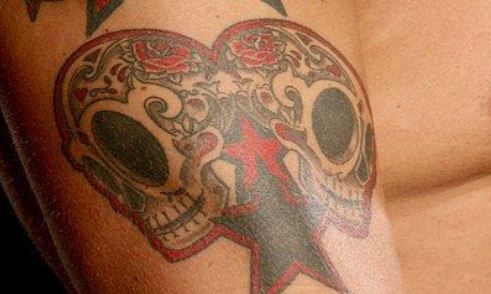 Tattoo: On Edge’s right bicep there are two bandana-wearing skulls attached through their backs and inked in red and black ink. Along with them, there are two stars, one in red ink and others in black are tattooed. The skulls are adorned with roses and have been outlined in the heart’s shape.

Meaning: Edge said in an interview that this tattoo is an old school classic, and he always wanted to have it.

“I wanted something that reminded me of an old school, classic tattoo, which is why I had the roses and hearts put in there,” he said. “It was something I haven’t seen, and it’s exactly how I portray the Rated-R Superstar phase of my career. I’ve always said I’m the Guns N’ Roses of wrestling and this tattoo embodies that.”

“I wanted something that reminded me of an old school, classic tattoo.” 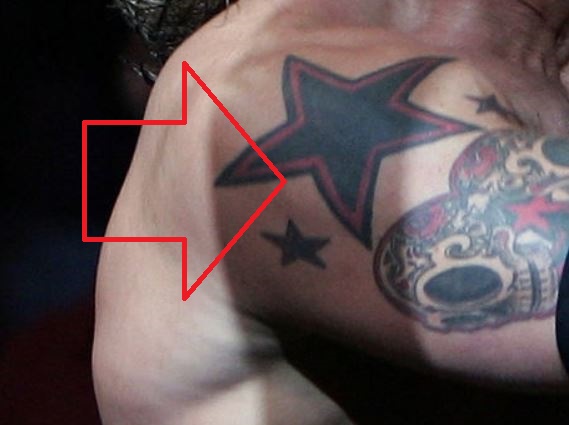 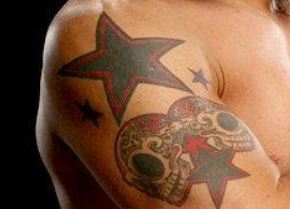 Tattoo: There are dark black filled stars tattooed on Edge’s right shoulder. Since Edge always wanted a tattoo more like the ‘guns and roses’ themed. So, he got another tattoo of the skulls under the three stars to give a complete ‘Guns and Roses’ theme look on his right shoulder.

Meaning: Since Edge always wanted a tattoo to personify his importance and worth in the WWE. So, he got another tattoo of the skulls under the three stars. Stars are considered being the guiding lights for everyone whereas skull has both negative and positive importance. Guns and Roses is a very popular American hard rock band from Los Angeles. The song named, ‘Guns and Roses’ talks about the evil side of Los Angeles which people encounter when they go there to pursue fame. 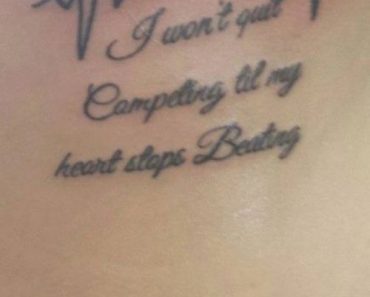 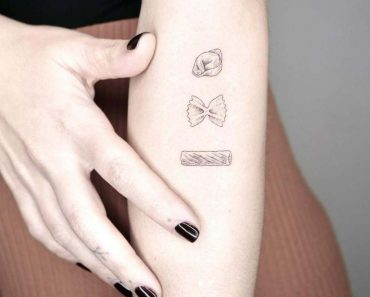 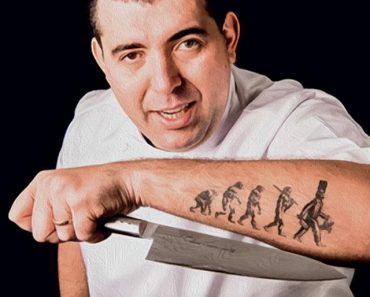 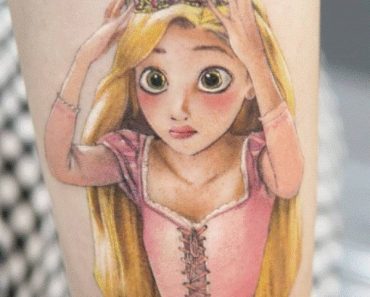 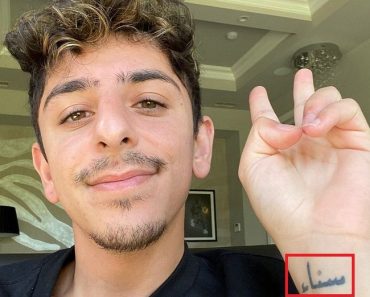