Eugen Polanski is a former professional football player. He played as a defender and spent most of his career in the Bundesliga, representing  Borussia Mönchengladbach, Mainz 05, and Hoffenheim. He has also represented the Poland National Team as well as the La Liga club, Getafe. Eugen has many interesting tattoos on his body. Let us take a look at them and the meanings behind them. 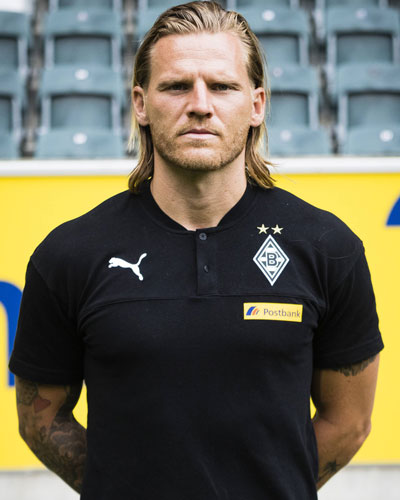 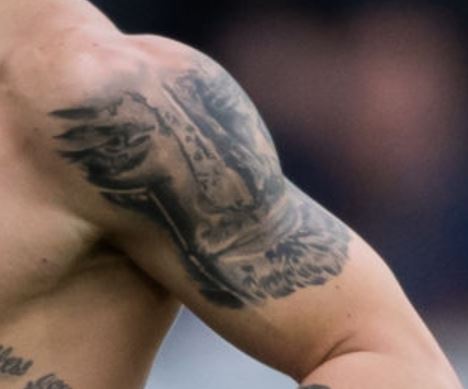 Tattoo: There is a tattoo of a man’s face done on Eugen’s left shoulder.

Meaning: The tattoo of the man on his shoulder is a warrior and is wearing a helmet that can be seen partially. The tattoo helps him with his strength as well as courage on the field. 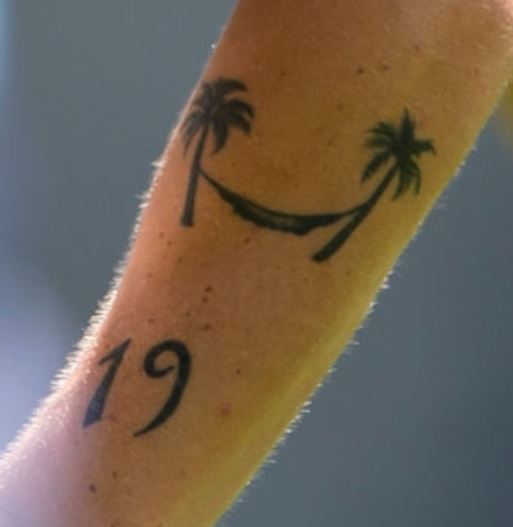 Tattoo: The upper side of his left forearm contains a tattoo of a hammock tied in between two palm trees. The number, 19 is also tattooed below the hammock.

Meaning: The hammock is something that he really likes and wanted to have the design tattooed. The hammock or as he says in German, “Hängematte” can also be seen in his Instagram posts and stories. The Hammock represents his relaxation after a game. While talking about if he would be open to playing in Spain or in a foreign league again, he said, “Even at almost 32 years of age, I still feel like playing football, my body is still doing it. I want to keep playing. However, if nothing suitable comes up in summer, then I just have to lie down in the hammock.” and laughed. The 19 on his arm represents the jersey number that he got in the 2005/2006 season for Borussia Mönchengladbach. However, he was given the No.6 jersey the following season. 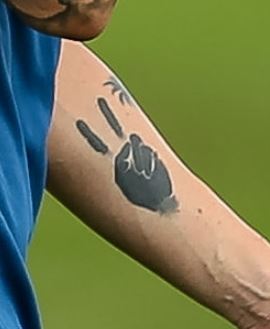 Tattoo: The tattoo of an ink print of a hand, lifting up the first two fingers is tattooed on the inner side of his left forearm.

Meaning: The tattoo of the hand gesture represents the symbol of peace. 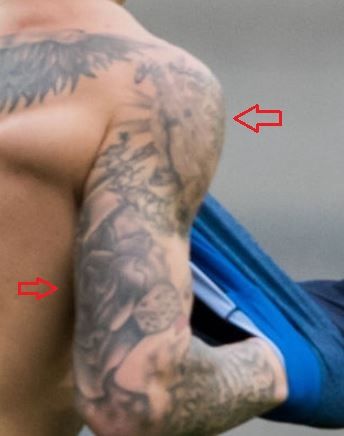 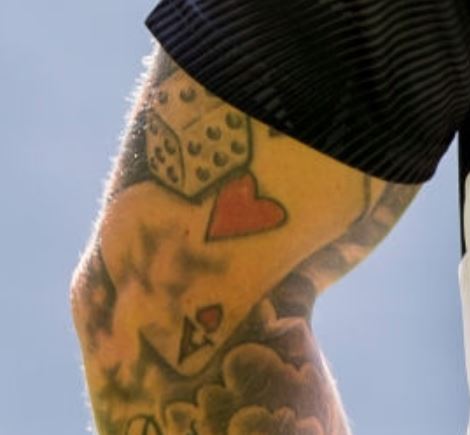 Tattoo: There is a tattoo of the Ace of Hearts card tattooed on his right arm near his elbow. There is also a dice tattooed right next to the card showing the number, 3.

Meaning: The tattoo of the card and the dice goes along with the quote tattooed on his forearm.

6. Quote on the right arm 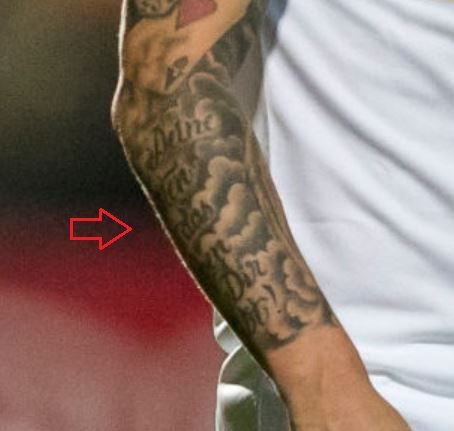 Tattoo: The side of his right forearm contains a quote tattooed on it that reads, “Spiele die Karten, wie das Leben sie dir gibt“.

Meaning: The quote on his arm is in German and roughly translates to, “Play the cards as life gives you, which is an interpretation of the famous quote, “Play the cards you’re dealt”. The tattoo of the quote and the Ace of Hearts represents how he makes the most of everything and gets through everything that life throws at him. 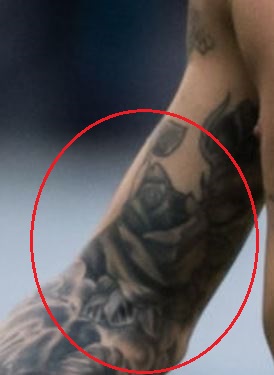 Tattoo: Eugen’s right bicep contains a tattoo of a rose flower on it. 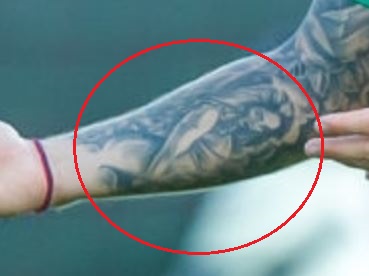 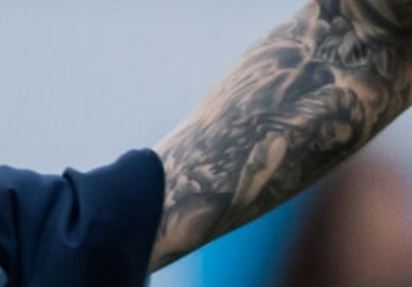 Tattoo: There is a portrait of a woman tattooed on the inner side of Eugen’s right forearm. The woman also has large wings and clouds tattooed in her background.

Meaning: The tattoo of the woman on his arm is a portrait of his spouse, Karolina, done in the form of an angel. The tattoo shows how much he loves her and how blessed he feels. The couple also has three kids. 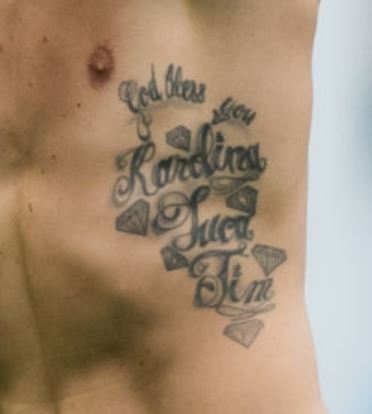 Tattoo: The left side of the player’s body contains one of the most important tattoos for him. The words, “God bless you” are tattooed on his left ribcage along with the names, “Karolina, Luca, and Tim”. The names are also surrounded by diamonds and are done to form a group together.

Meaning: Very little is known about Eugen’s family as he likes to keep his private life private but his tattoos reveal about them too. The tattoo on the side of his body represents the love that he has for his wife, Karolina, and his sons, Luca and Tim. The diamonds represent how his family is the diamonds that he got dealt in life and his family is everything for him. The name of his third son can also be found on his body as you will soon find out. 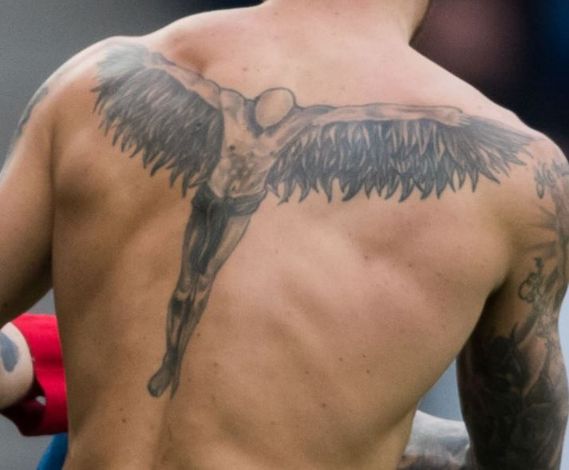 Tattoo: The back of the player contains a tattoo of an angel done in the shape of a cross on it. The angel’s neck is rolled down and his wings can be seen behind his arms, stretched with them. The angel’s body is tattooed along his spine.

Meaning: This is the first tattoo that Eugen got at the age of 18. The tattoo was done by his friend, Jörn Elsenbruch and he chose the shape of the cross to get the angel tattooed as it is a symbol of his faith. The tattoo is an interpretation of how Jesus sacrificed his life to save humanity. 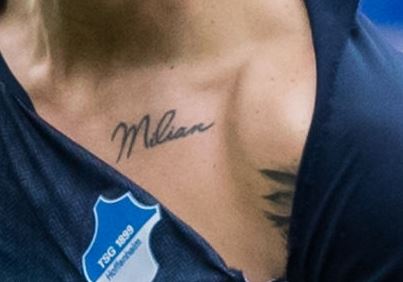 Tattoo: The name, “Milian” is tattooed on the left side of his chest, just below his collar bone.

Meaning: The name on his chest is the name of his third son, Milian Polanski. The tattoo represents how much he loves him and the rest of his family too. While talking in an interview he said how if he scores any goals, he dedicates them to his children.

There is another tattoo that Eugen is currently getting on his left arm, just below the face of the warrior. The tattoo is not yet finished but he put this post on Instagram teasing it. He is getting the tattoo from the Magic Moon Tattoo Studio. The post can be seen below.