If you could just bring back the Naruto manga series to your mind, Sasuke is one of the main protagonists of this series and let’s discuss that why Sasuke had the evil mark in the first place.  Sasuke had a mark that signifies his doomed situation but he usually uses it as his trump card. However, later on, he disappeared with the help of his brother, Itachi to get rid of the mark using the Sword of Totsuka.

Sasuke who took birth on July 23, was a vibrant child, who was always enthusiastic to gratify and be a deserving candidate of his family name. This however changed as his entire family and the village got swiped by Itachi, his elder brother. The surprising thing is that Itachi was someone who Sasuke admired and looked up to as a younger sibling. Itachi let go of Sasuke by not killing him and told that Sasuke, isn’t deserving enough to be killed yet. Only by growing more powerful, such as by procuring his personal Mangekyō Sharingan, could he declare himself to be a challenge worthwhile to Itachi’s abilities. Itachi literally forced Sasuke to dislike him, to yearn for revenge, and to gain strength from that.

And so, Sasuke’s only aim in life grew up to be the revenge for his family’s massacre and, by extension, obtain the power that demanded that revenge, even if it involved earning a supplementary power from outside – that’s how Orochimaru came into the picture. With Orochimaru’s Juinjutsu, which is this cursed seal and which helps to transform, that Orochimaru can ask others for support. One of the curses that were bestowed was this Cursed Seal of Heaven which Orochimaru bestowed on Sasuke that could help the receiver increase their chakra levels and hence their physical abilities. It is unquestionably one of the strongest seals. When the seal is activated, Sasuke gets the powers equal to Naruto’s one-tailed form when he first implemented it.

To activate a blighted seal, Orochimaru leaves a bite on the receiver’s neck, prompting the seal to develop near the punctured bruise.  The receivers experience an unconscious state while the body accepts or rejects the magic of the seal. Those whose bodies are not compatible with the cursed seal will have to face death.

It is no wonder that many who follow the Naruto series who are also the die-hard fans of Sasuke get themselves inked on the left side of the nape of their necks as a reminder of the revenge and the challenges that Sasuke is ready to face to conquer his aim.

It is not necessary, however, to have the seal tattooed on the nape of the neck only. One can choose different spots as per their liking or wherever they find a personal significance. 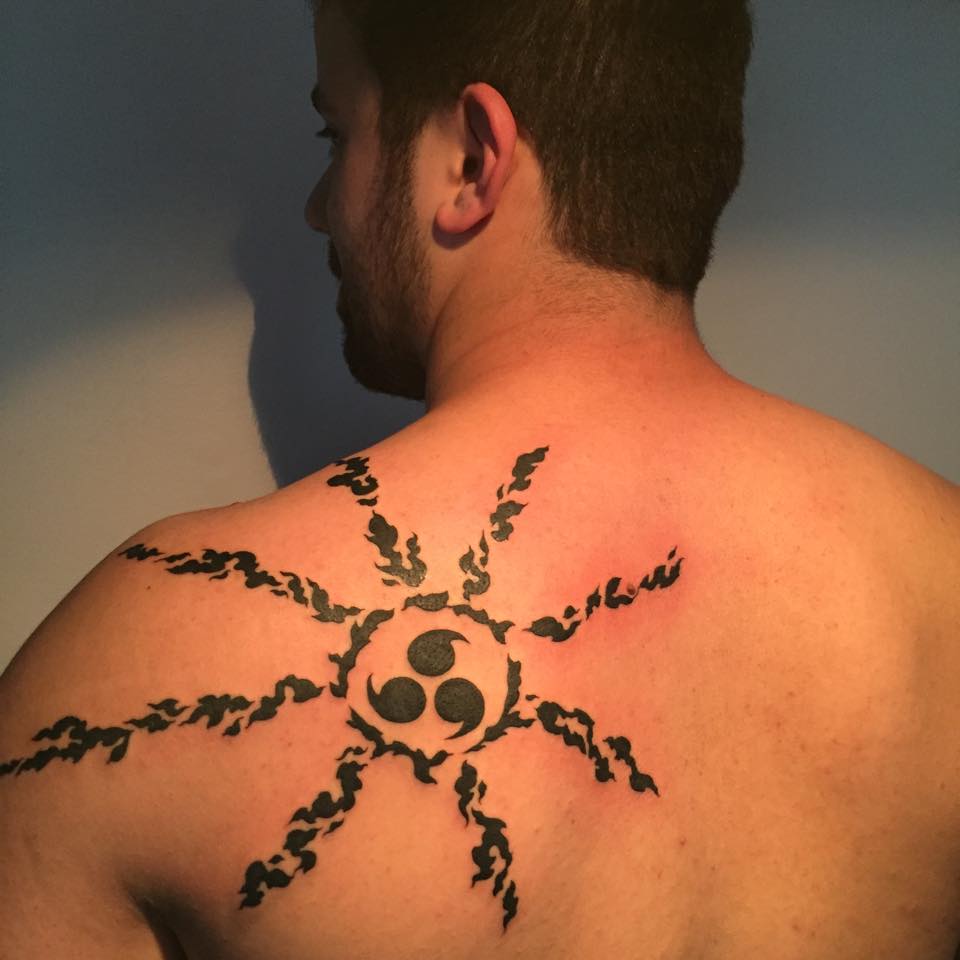 The tattoo contains three tomoe (and the complete design is known as mitsudomoe), related to the Sharingan, which when stimulated, turns the seal to orange-red and disperses flame-like impressions across Sasuke’s body. Here, the guy has got the seal tattooed on the left side of the upper back, which is a great option for an elaborated design. 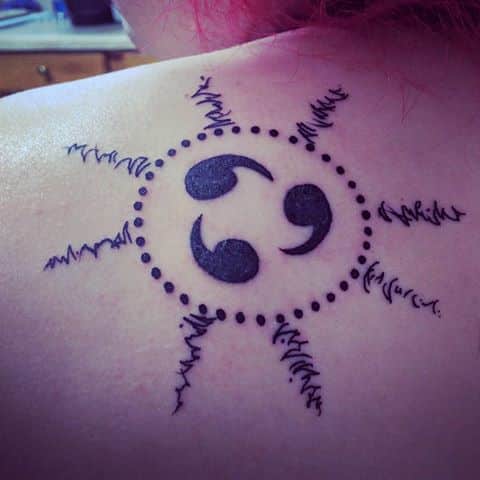 Sasuke is able to induce Orochimaru’s wicked chakra through the seal, which leads him to transform into a twisted frightful variant of himself, but he does get more powerful and agile. In this particular design, the flames that traverse through the seal has been replaced by some zig-zag lines as a variation. Probably you can get some different kind of designs incorporated to give it a personal touch. 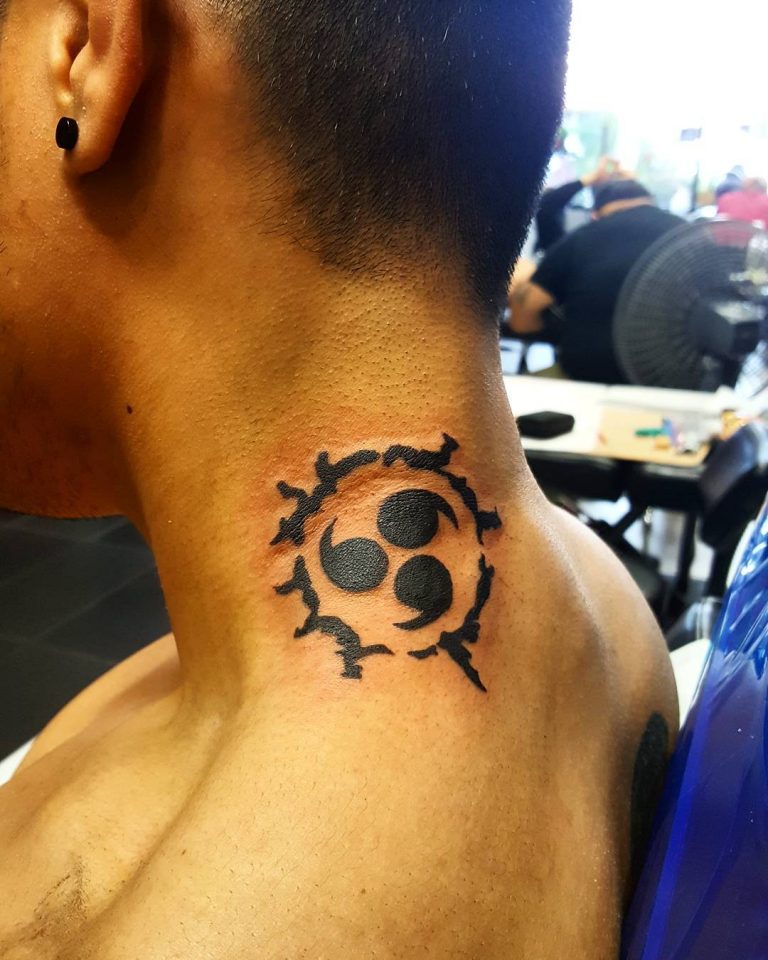 This design will seem to represent the exact spot where Sasuke’s seal was applied, that is, on the left side of the back of the neck. The black and white ink pattern is the most common pattern that is in vogue but you can vary in its size and color as per your liking. 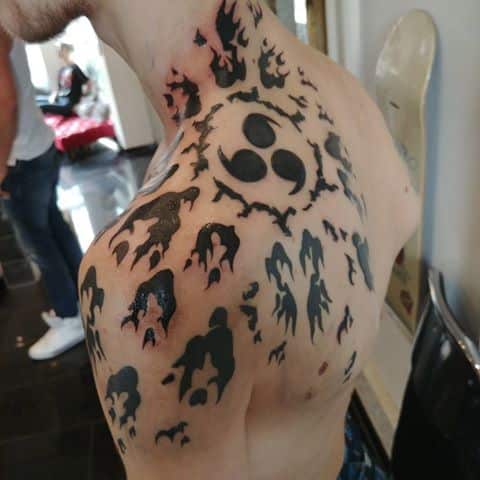 This design looks uber cool. For starters, it is placed in an accurate place, that is, on the left side of the back of the neck. Secondly, it spreads its flames like a peacock on a rainy day ready to dance. It not only looks surreal but something that really has a strong impact. In reality, when sedentary, the seal will only be a normal black tattoo someplace on the user’s body. 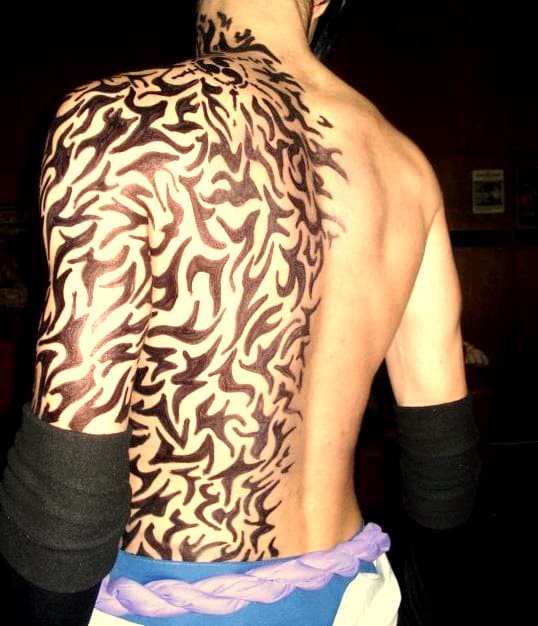 This design is similar to the previous one in that it covers almost half the back, however, there are some peculiarities. The shape of the flames is definitely different and in fact, the seal is quite smaller in this pattern. Obviously, the wearer wants more attention on the flames. This tattoo represents the fact that the second and final stage of the seal prompts the black marks to wholly cover the user. 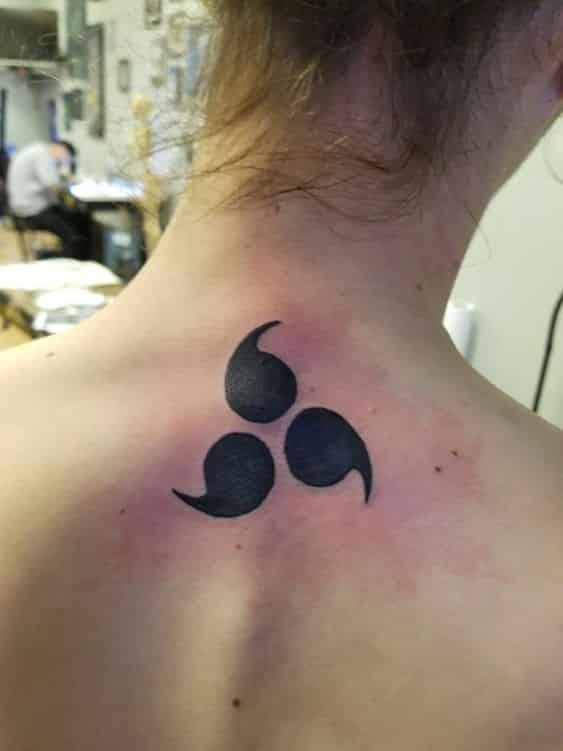 Flames are a part and parcel of the design but you can also try this distinct styled tattooed on the middle and not on the left side of your neck. Similarly, you can experiment with the placement and other components of the design. 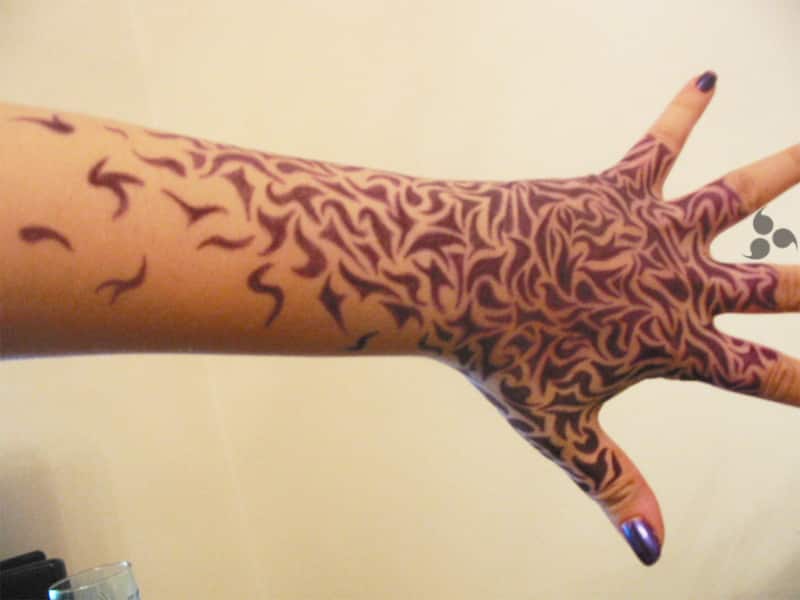 Or you can decide to have Sasuke’s Curse seal inked covering your hand and arms. This design is a bit unique and gives the impression of a cheetah’s hide. For some, this design is quite attractive but some might find the traditional way and the placement idea much better. 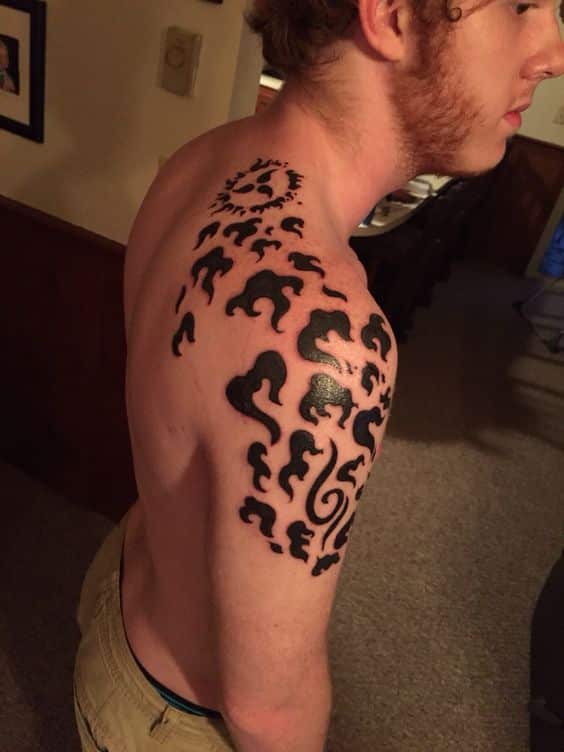 One can also try to get the placement area shifted to the rights side of the neck instead of the left side. And something that makes it even more different is the fact that instead of covering half of the back, itis going down the arms. It gives a great flame-y effect which looks super cool. 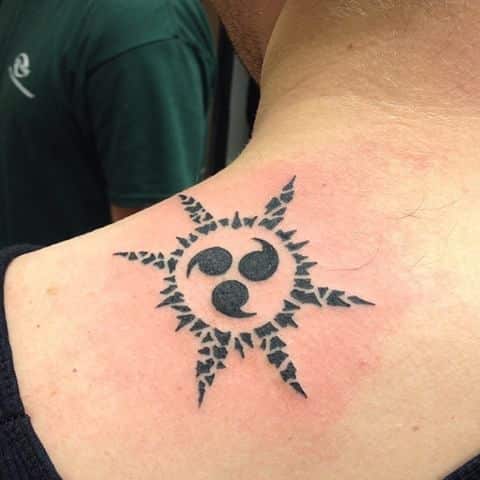 Now, this design represents the seal enclosed in a circle of flames. It is done with great intricacy and the detailing is super neat. There’s a reason why Orochimaru intended to have the seal mark located at the side of the neck, very close to the brains and that is because so that it can degenerate Sasuke’s mind which could let him transform into the stronger version of himself. 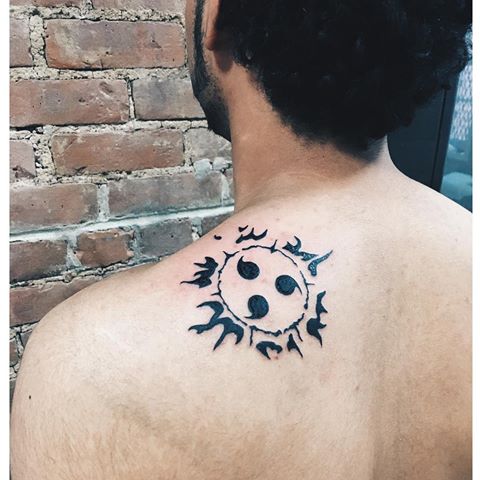 Once again a circular pattern! Three identical marks are arranged in a such a patter because of the symbolism behind the circle. The circle is the universal symbol of wholeness, perfection, infinity, timelessness and the self. Clearly why many designs incorporate the flames going in a circular pattern around the seal. 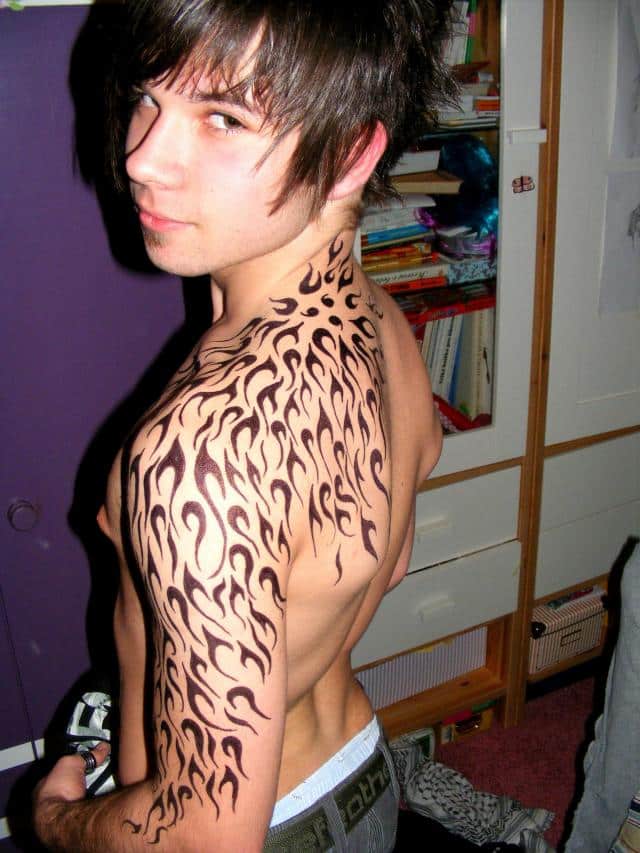 If you are into Cosplayer and stuff, this design will definitely attract some attention. It is extensive and neatly made. 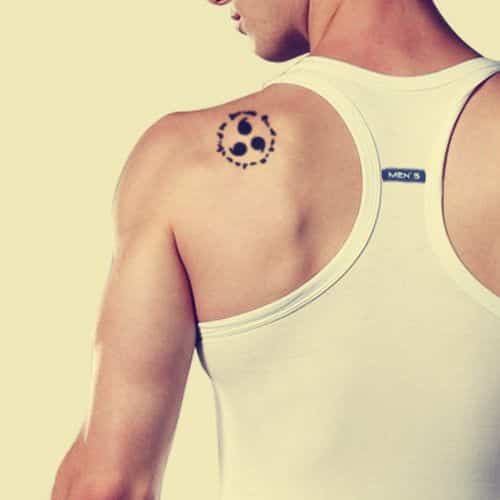 While some people like their Sasuke seal over the top, there are other kinds of people who go for the Minimalistic Sasuke Curse which actually looks quite attractive too. So if you are not looking for something extensive, this is a go-to design for you. 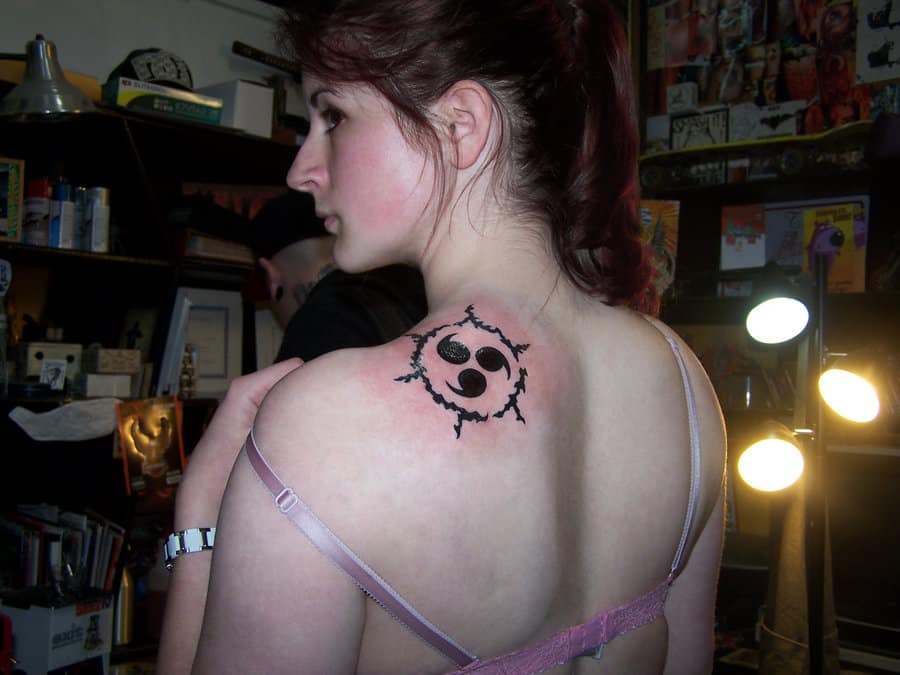 A lot of fans have praised Sasuke’s character and how he was capable of delving deeper into the blackness and how he achieved salvation later on even when others believed that he was way beyond salvation (well, all thanks to Naruto who didn’t give up believing in his abilities.) Even girls can get this cursed seal tattoo done as a representation of strength and courage in life. 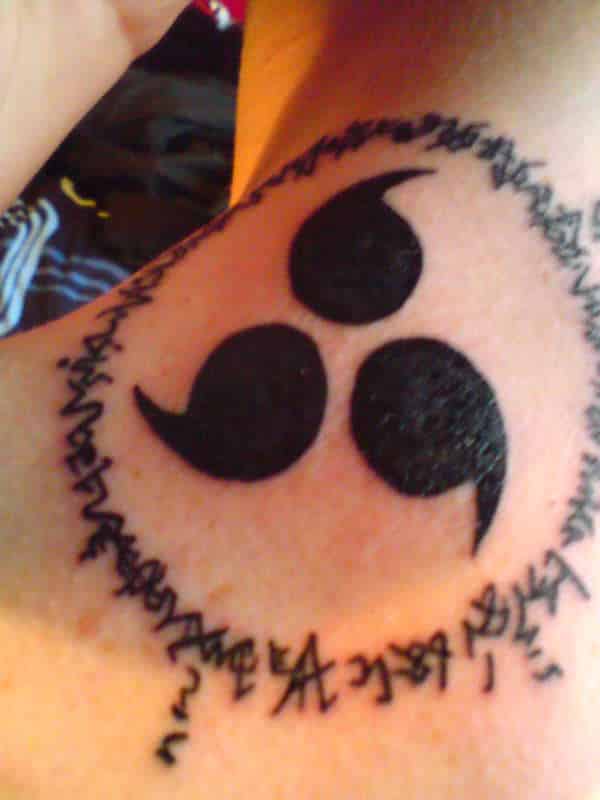 This seal mark is quite enhanced and the flame pattern is kept to a minimum. Apparently, this is probably because the wearer wants the emphasis to be laid on the seal and not the flames that surround it.

In the end, getting a tattoo that you love and would cherish for a long time is something that needs a huge amount of research. We have given you 14 such creative ideas that might inspire you to reach your perfect design, however, you can get these designs altered as you feel right. Adding a quote or a date or probably the name of a loved one that inspires you is a great idea that could supplement your design. You can also get the name of someone or something that inspires you to do your best and demolish all the obstacles that come your way. Do let us know if we were of any help by commenting down below! 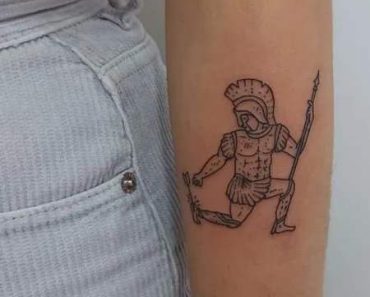