If you are thinking of getting into the realm of having your face inked then an under the eye tattoo would be a great place to start. The security has clearly shifted and has accepted tattoos more and more. In the recent world, we see more and more rise in the tattoo industry and people’s options for tattoos. Under the eye, tattoos are quite a popular area where people get themselves inked.

Thus, in think the article we have listed 11 amazing under the eye tattoos which will also help us explore their meanings and historical roots to show the bigger picture. These pictures and designs have both modern as well as historical symbolism with them. So take a look ahead. 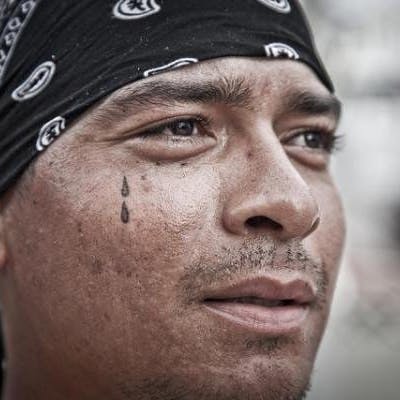 When we think of having an under-the-eye tattoo, we can see one infamous symbol coming to mind which is the most popular, that is, the teardrop symbol. This symbol is best to describe the early commencement of face tattoo and especially the under the eye tattoo. It is also popularly known to be associated with fringe tattoos and prison life. It was used so that one can differentiate between the gang affiliates, violent crimes, and even pay homage to the ones they have lost. 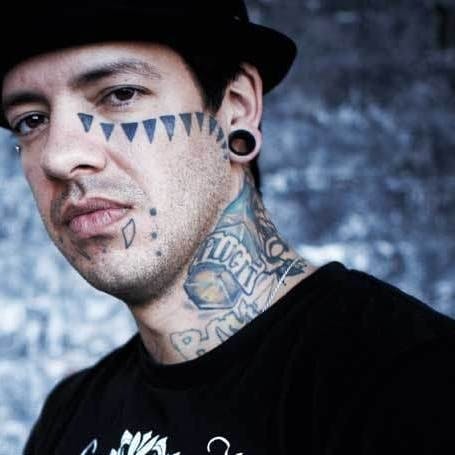 The tattoo artist, who is famous for his traditional work, Myke Chambers, is a great example of face tattoos and their evolution. His life journey is an example of a difficult childhood, which is bent by series of addiction, alienation, and loss. As he grew up to be an adult, he rounded himself up in texas prison for 4 years. He uses his experience of such a grave length to hone his skills in the tattoo. Today, he is one of the most famous artists and ower of Seven Swords Tattoo Company in Philadelphia. He is also famous for the Polynesian tattoo that is under the eye.  Asking for the meaning of the triangle tattoo under the eye tattoo, he says, “life through truth and honor”.

In the Polynesian culture, any artwork on the upper half of the body is mostly associated with the spiritual world. Tattoos with upside-down triangles are most commonly used to show the number of enemies defeated. It could in fact be linked with Mike’s own spiritual and physical journey in the world. He was also transformed gravely. That is, by defeating his personal demons and by leaving his life of crime and negativity behind to start a new life of compassion. 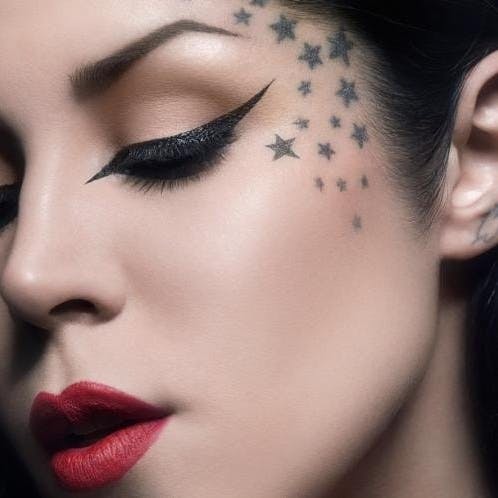 If you are looking for a more feminine stand for tattoos that are based underneath the eye, there is no better example than this picture of the tattoo artist, Kat Von D who has stars around her eyes. Kat Von D describes her underneath the eye tattoo style which is her iconic style by saying that, “It is a symbol of being able to be heavily tattooed and still carry yourself in a feminine way”. She moreover continued that her personal beloved Motley Crue number is “Starry Eyes” which also helped to invigorate the personal design. 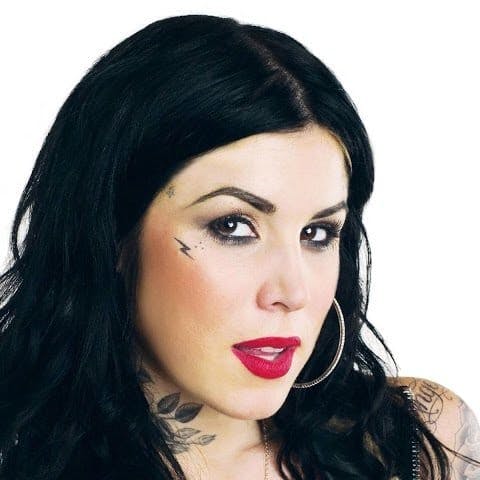 Kat Von D also supports a cool under-eye lightning bolt tattoo underneath the eye. Interestingly, this underneath the eye tattoo describes and represents her LA tattoo shop, High Voltage Tattoo which is one of her preferred destinations. Besides just a tattoo shop connotation, the lightning symbol in the normal terms also stands for power, decisiveness, or can be used if you are a huge fan of the fictional book or movie series, Harry Potter or The Flash. 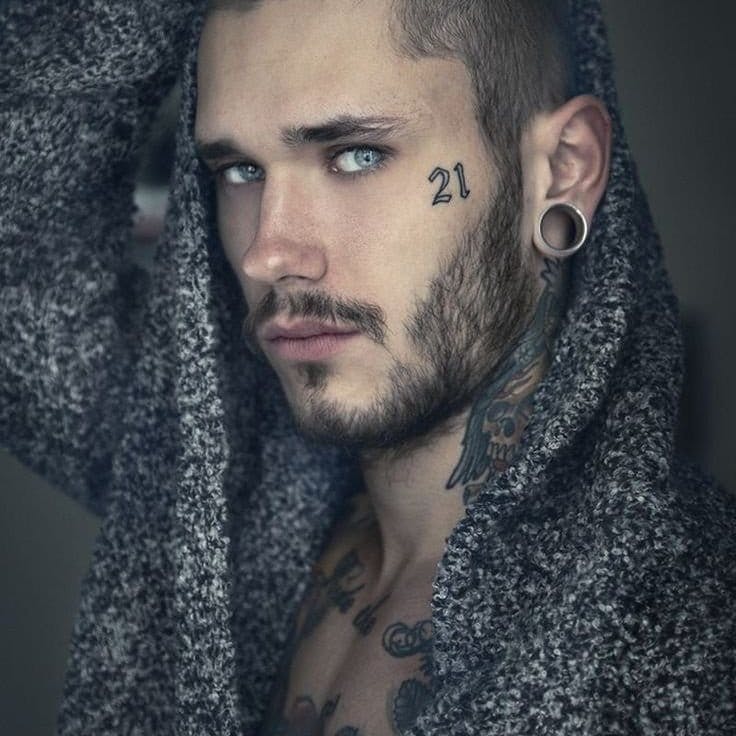 Getting a numeral tattoo is one of the most understated and very classical choices especially for men who want a face tattoo underneath the eye. The picture here shows off how to wear the numeral tattoo underneath the eye with class and style in a very contemporary way. Some famous celebs who don number tattoos on their face include rapper XXXTENTACION’s “17”, which was inked on his upper forehead, Lil’ Pump’s “17”, which is inked on the side part of his eye, and the “69” donned by rapper Tekashi 6Six9Nine which is inked right above his eyebrow. These artists chose to decorate their faces with numbers that represent any certain milestone, lucky number, and numerals that are representative of their birth. In fact, choosing an eye tattoo that has numerals in it is a great way to adorn the face of the person. 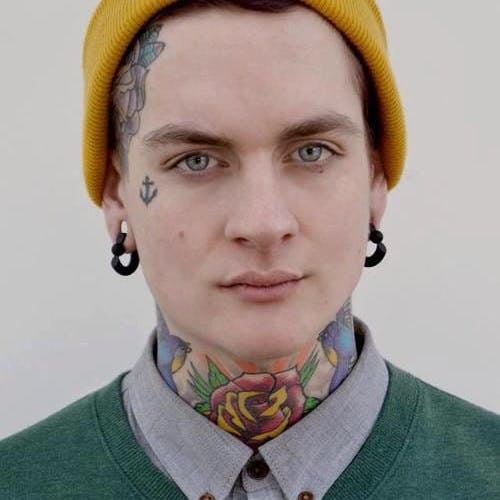 A great way to get yourself any tattoo, no matter if it is just a face tattoo or any tattoo in the whole body is to get some design that holds personal meaning for you. In this picture, the wearer is wearing a classical anchor tattoo underneath the eye which means a lot of things. The meanings that this anchor design holds include the process of staying true to yourself and staying grounded. It is also very similar to mantras that we have at our religious places and symbolizes a sense of well-being, health, strength, and even good luck. This symbol is basically used for force and strength in hard times.

Tattoos under the eyes hold a very different meaning for every wearer but to select a permanent symbol for the face is a whole different thing. So why not choose something that will remind you of something significant and would make your journey in this life better? 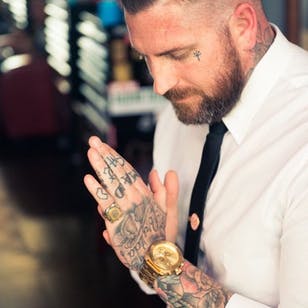 Crosses have been a huge part of the tattoo ritual which has various meanings behind it. The meaning of the cross depends on the time period as it has varied all over the world and the parts of the world where they are from. Historically, the cross symbol has been used by Middle Eastern Coptic Christians to define and symbolize defiance and reverence to the god, especially in the Muslim and Christian society.

However, it changed over time to mean different gang affiliates and was worn by prisoners and gangsters. The meaning behind the cross changed a lot with this. Now, people wear cross symbols all over their bodies to describe various things. Sporting this kind of cross under-eye means a lot of things. Now people get across design under the eye to mean something trendy and classy. Many celebs also get a cross tattoo, not necessarily under the eye, but on different parts of the body to describe various things. Most notable celebrities include 21 Savage, Lil Wayne, and Justin Bieber. 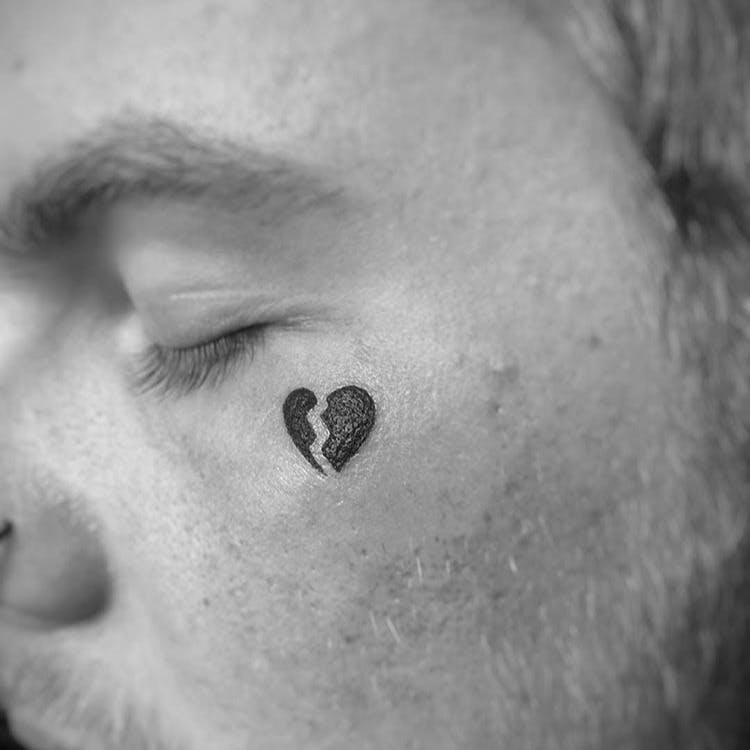 A tattoo under the eye has increased in popularity with women if it is soo popular with men. More and more women have decided to make feminine tattoos for the face like hearts, stars, upside-down triangles, and even words and alphabets. A heart tattoo especially is one of the most favorite selections with women. They do not have a particular meaning associated with it but it is only because of the placement idea that it is known. It can, however, and most commonly be used to show off love feelings, a passionate personality, or simply as a symbol of being adorable.

Another common expression is the symbol of a broken heart which is placed beneath the eye which describes the total opposite of the heart tattoo. It can denote the loss of a loved one or the ending of an important relationship. Diamond tattoos along with heart tattoos are also very popular designs because it describes inner strength, beauty, power and wealth. 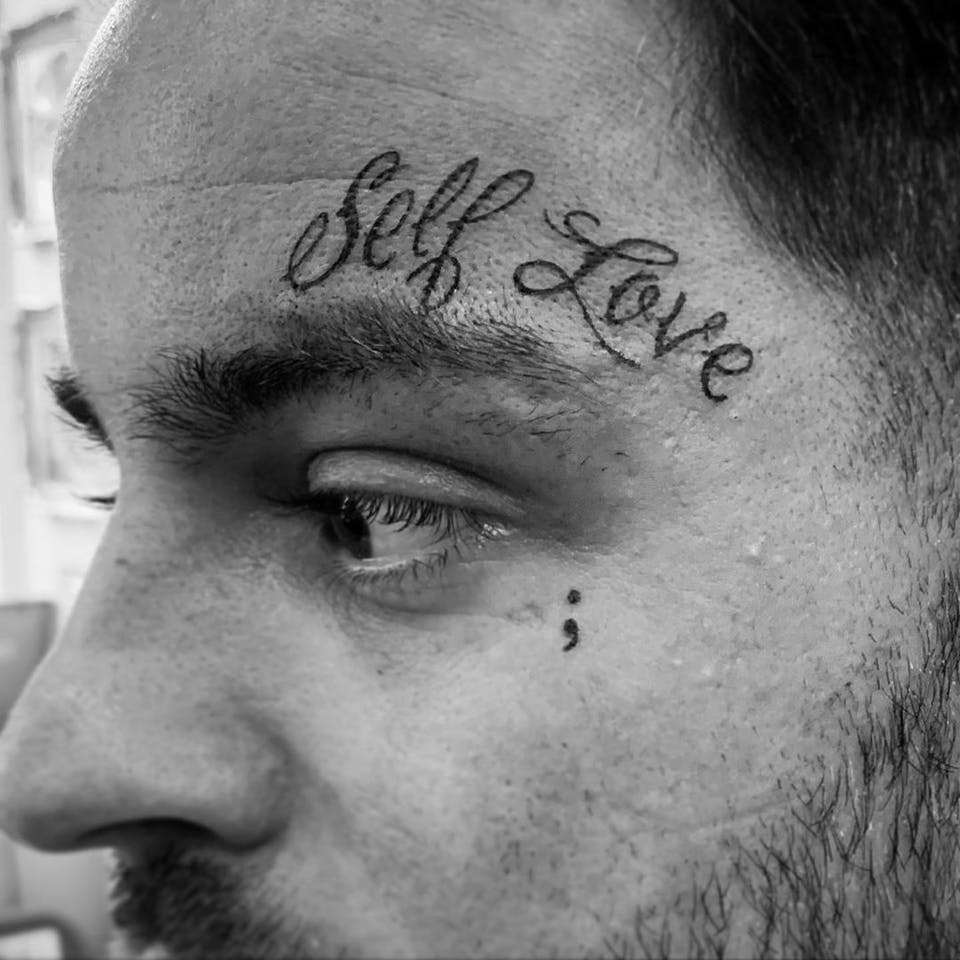 Dot tattoos beneath the eyes have been most commonly used in western culture to symbolize the love for gang life. A tattoo under the eye showcases three dots which has been synonymous with various things especially “mi Vida local” or “my crazy life”. This exact symbol and a phrase do not belong to any particular kind of gang but it represents a bit of gang lifestyle.

Besides the gang culture, the symbol of these three dots tattoo under the eye represents many things like spirituality, religion, and balance within one’s life. In the Christian relief system, the dots might also represent the holy trinity, or the father, son, and the holy spirit. The three dots here can symbolize balance in one’s life especially when it is placed in a triangular shape.

The usage of the three triangle dots also signifies meaning within the maths subject which symbolizes the “therefore” symbol. This symbol is used to signify a logical consequence. People also get a semicolon tattoo which is a great symbol for people who want to symbolize solidarity with those who all suffer from any kind of mental illness, or anything similar to this. 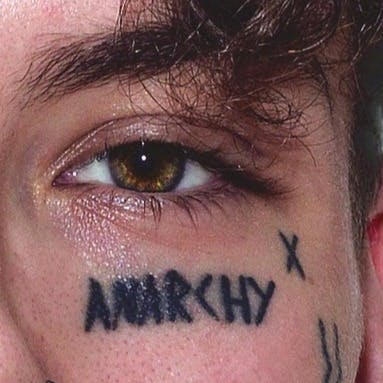 This tattoo depicts an X symbol which makes an excellent choice for those who are opting for a great face tattoo. There is not a single specific meaning which is assigned to the placement of an X tattoo that is beneath the eye whose meaning has changed continuously and has evolved throughout the years. One of the most common reasons that have been tattooed on the face or the body with an X symbol is to symbolize that one lives life on the edge. A single X or multiple X represents that the person has left drugs or any kind of alcohol or recreational activities.

For those who are interested in numerology, the X is a symbol that also represents the roman Numeral 10 which symbolized unity and completion of a cycle in one’s life. It describes the completion of every level of onesies. The X symbol is also a representative of the hardships that one has faced in his life. It also represents the many hardships that have been recovered from. Some people also choose this symbol which is a reminder that one must stay away from any bad habits that they might have had in the past.

If you wish to have any tattoo under the eye which might have highly personal meaning and mysterious vibes with it, an X tattoo would be a great option for your to try.

11. Upside down Umbrella Under Eye Tattoo 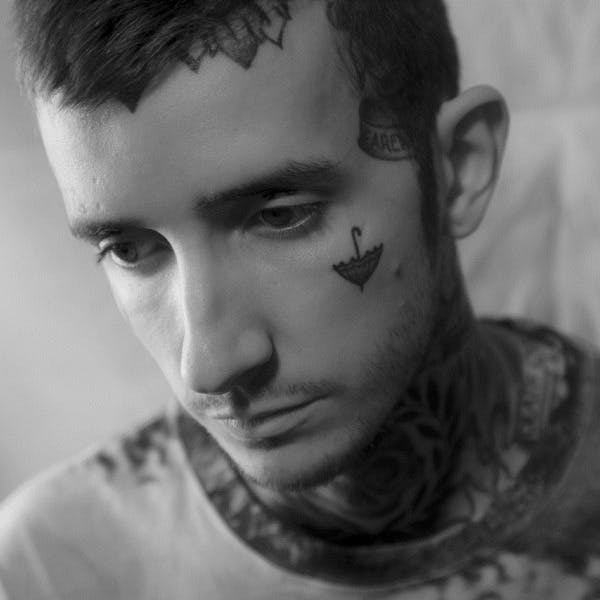 The umbrellas have been quite a popular symbol that has been used in tattoos and inking. There is also a very modern take on these classic designs which have now been sported on the face, and especially as tattoos under the eye. There is no permanent meaning for the placement of the umbrella tattoo design which can signify a lot of meanings. Many have understood this umbrella tattoo under the eye as an embodiment of the phrase “When it rains, it pours”, especially when it is clubbed with raindrops. In this context, the upside-down umbrella can be used to signify compassion and love as if it is catching tears.

The upside-down umbrella here can be representative of personal protection from all the bad and the evils that are there in life. It also represents the hardships and victory over the hardships. The umbrella tattoo under the eye also has a history of representing magic, wealth, and travels. Thus with so many different kinds of meanings, which represent wealth, magic, and travel, this umbrella tattoo under the eye is perfect to fit all your needs.

The Evolution of Under Eye Tattoos in Western Culture

Even though the face tattoo in a general and broader sense have been associated with a life of lawlessness, death, penalty, violence, and different meaning, the tattoo under the eye has had a greater time taken for progress towards a more positive and creative direction. In the present times, we might have seen a lot of familiar faces which are inked with a tattoo under the eye.

Even if many people decide to get these kinds of face tattoo which helps us to stand from the crowd, these designs which have a lot of meaning really helps to bring people together and make them instantly noticeable and different from others around them. 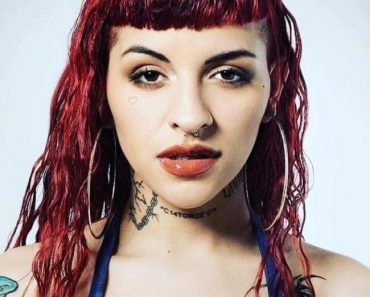 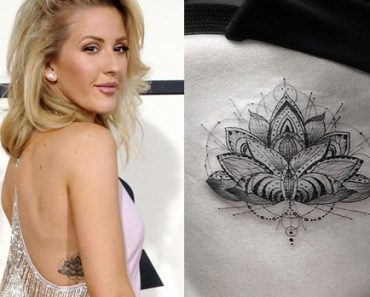 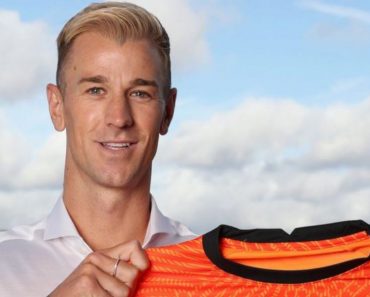 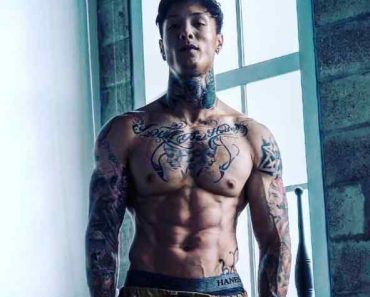 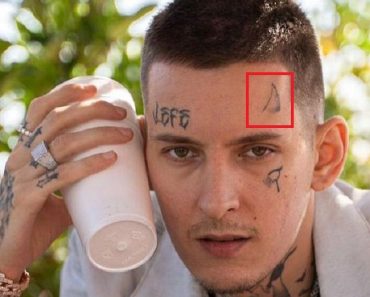 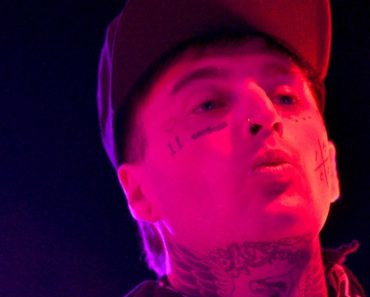