Vítor Vieira Belfort is an American-Brazilian Mixed Martial Artist, who is currently signed to ONE Championship. Belfort has been the part of the Ultimate Fighting Championship (UFC) previously, where he fought in the Heavyweight, Light Heavyweight, and Middleweight divisions. Vitor is known to be a crazy ink lover, let us find out his tattoos and their meanings. 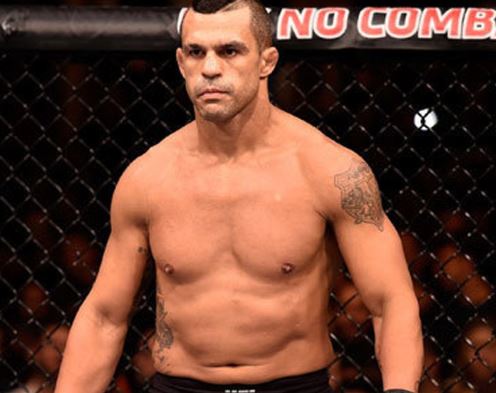 Eu prometi que iria postar quando terminar a tattoo, aqui segue e aí gostaram? I promise that I would post when it was finish my tattoo, here it is. You guys like it? @julianotattoo u did a fantastic job , thanks for your work

Tattoo: On October 5, 2017, Former UFC Light Heavyweight Champion finally finished that giant arm tattoo on his right shoulder which covers almost 25 percent of his right upper arm and stretches from his lower arm to his shoulder and back. He revealed it on his Instagram account. The masterpiece was done by the tattoo artist Juliano.

Meaning: The lion is one of the most popular animals for people to get tattooed on their bodies especially those who seem to consider themselves loyal and brave in life and so is the case with Belfort. The lion is also considered to the symbol of Aristocracy.

2. Portrait Of Jesus On His Right Bicep 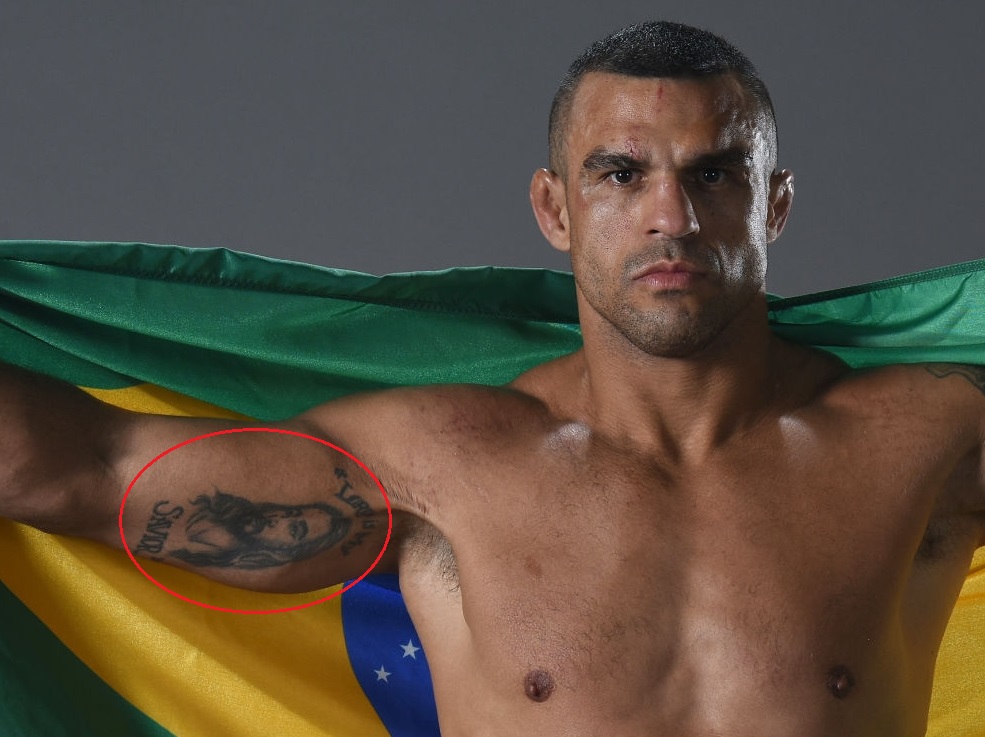 Tattoo: Belfort has a tattoo of a portrait of Jesus Christ inked on the inner side of his right bicep along with the words which read as ‘Lord Is My Savior‘.

Meaning: This tattoo represents his strong religious belief about his religion i.e Christianity and his faith and love for Jesus Christ, how he wishes that the Lord should protect him during all difficulties. 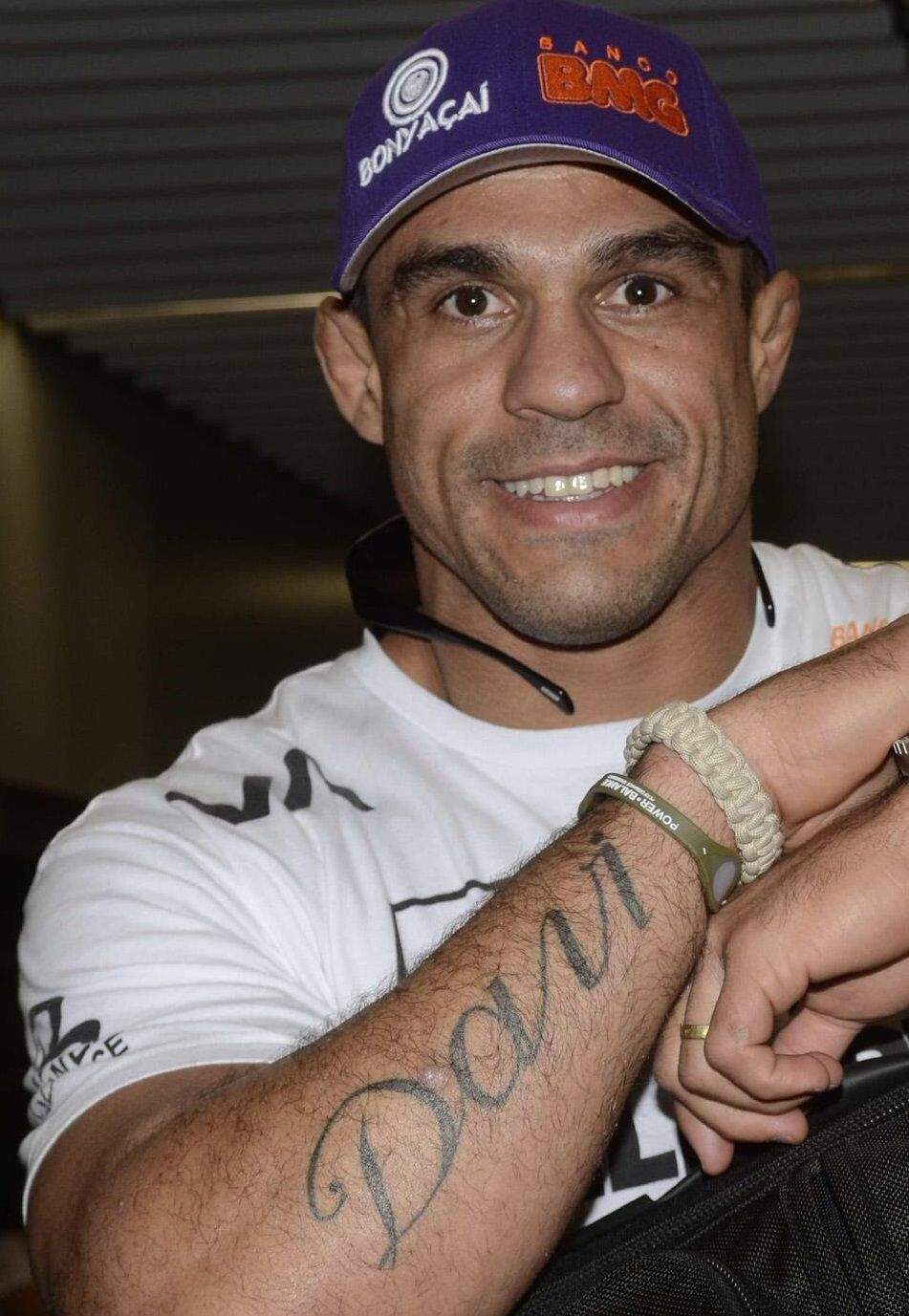 Tattoo: The outer side of Vitor Belfort’s right forearm is tattooed with word that reads, ‘Davi’ inked on it.

Meaning: Davi is the first name of his son (Davi Belfort). 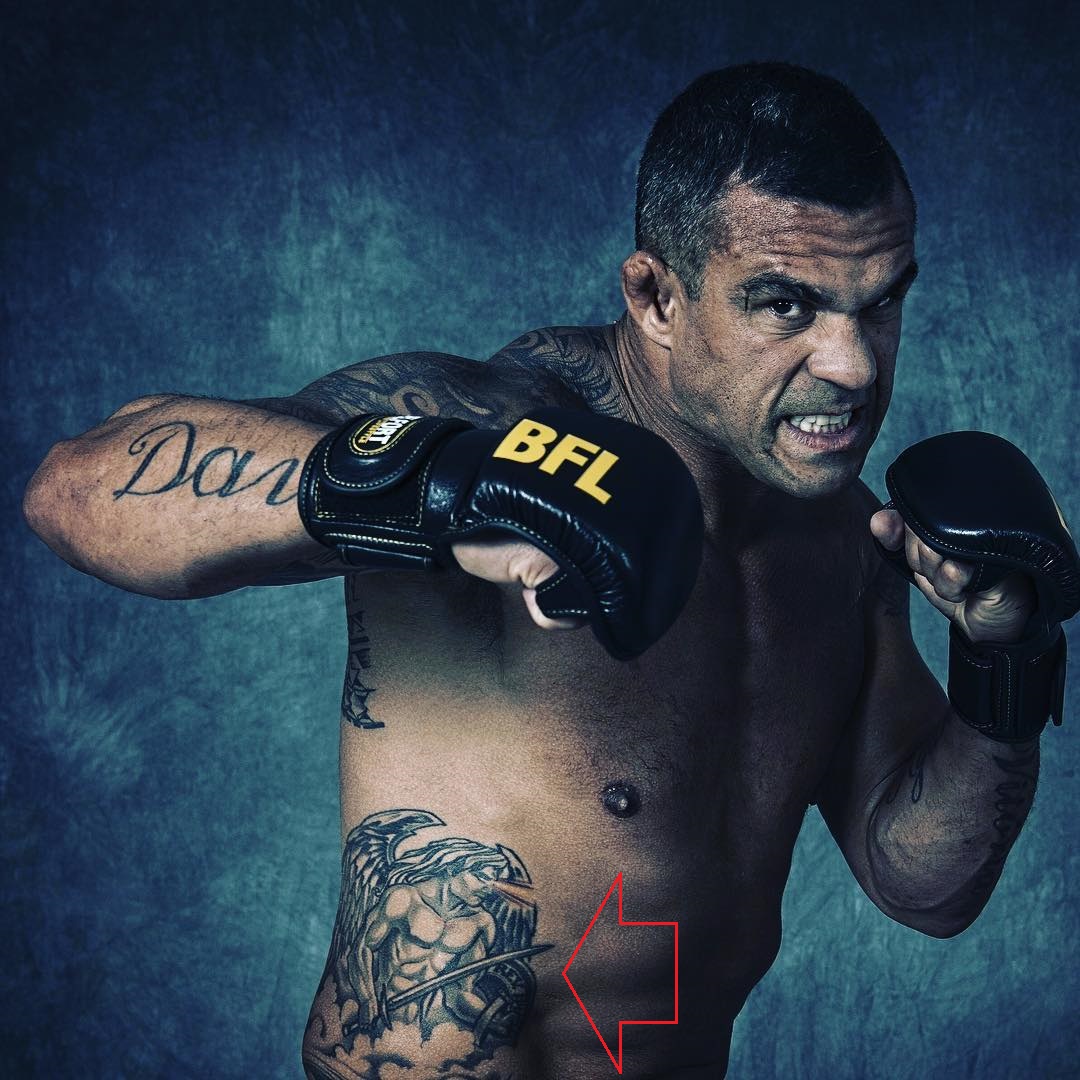 Tattoo: The right side of Vitor Belfort’s lower abdomen has a tattoo of a warrior with a sword in his hand and wings rising from his back

Meaning: The tattoo reflects the warrior who is always willing to protect everyone around him and is seen carrying his weapons with him. Vitor claims to be a family man who would go to any extent to protect his family from all difficulties and external environment, and his such faith in himself encouraged him to get this tattoo. 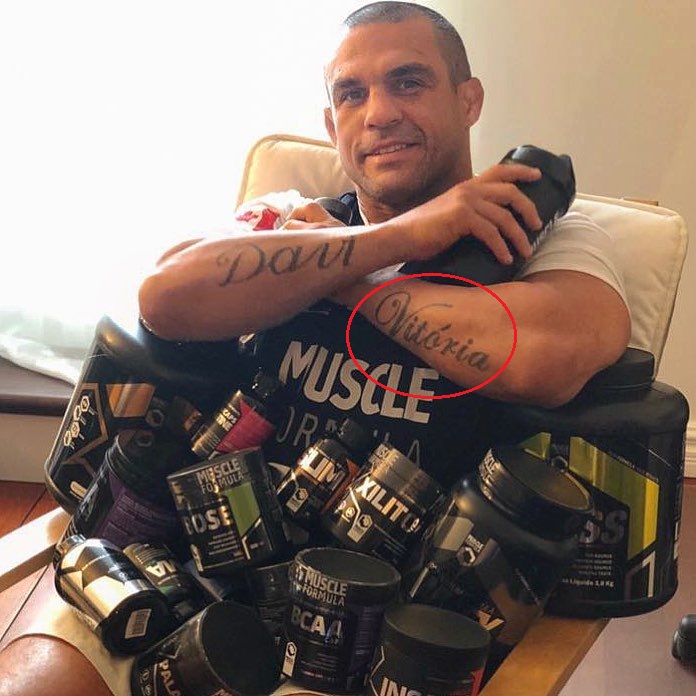 Tattoo: The outer side of Vitor Belfort’s left forearm has a tattoo that reads, ‘Vitoria’ inked on it.

Meaning: Victoria is the name of Belfort’s daughter. He also claimed in an interview prior to his match of UFC on FX 7 showdown against Michael Bisping in Sao Paulo, Brazil that

“The prophecy has been written on my arm, Vitor means victory.”

“It’s been inked there for quite some time, meaning that “the prophecy” is not always guaranteed inside the Octagon”. 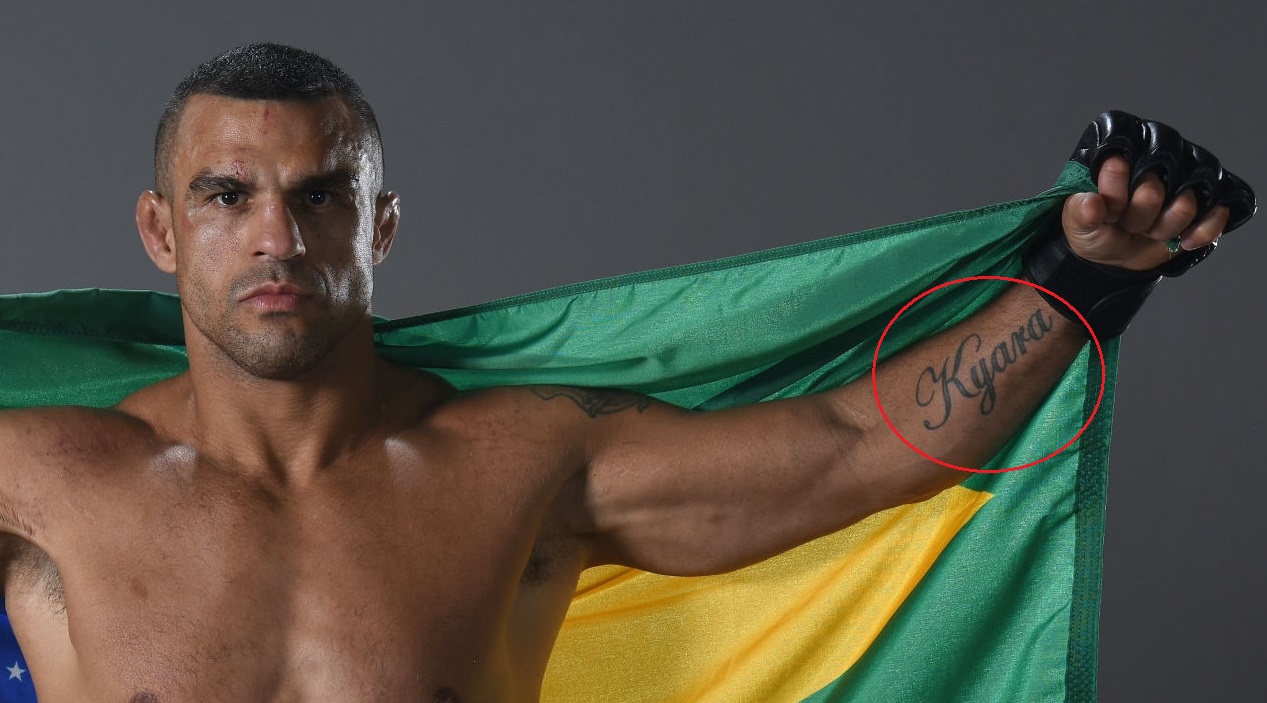 Tattoo: The inner side of Vitor Belfort’s left forearm is inked with the tattoo of his younger daughter’s name, ‘Kyara‘. 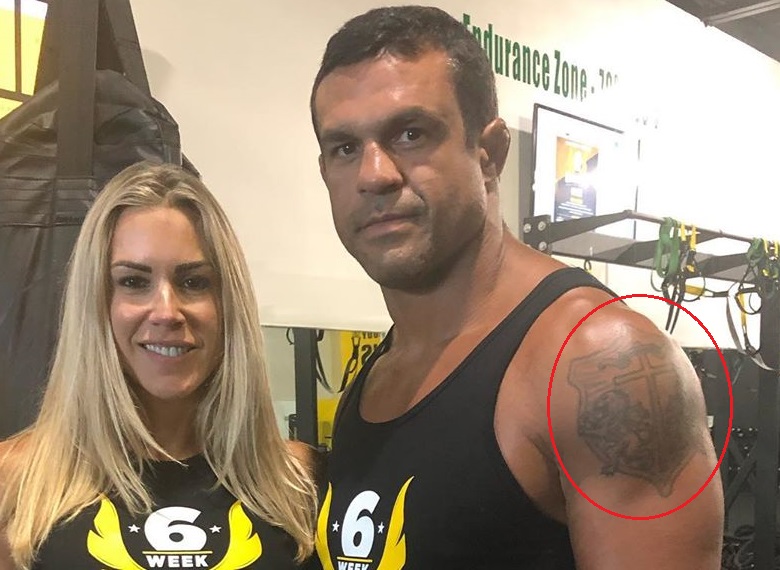 Tattoo: The outer side of Vitor Belfort’s left shoulder has a tattoo of a shield that is composed of an angel and a cross inked on it.

Meaning: The cross is the symbol of his faith in Christianity whereas angels symbolize good luck.

8. Cross And Quote On His Back 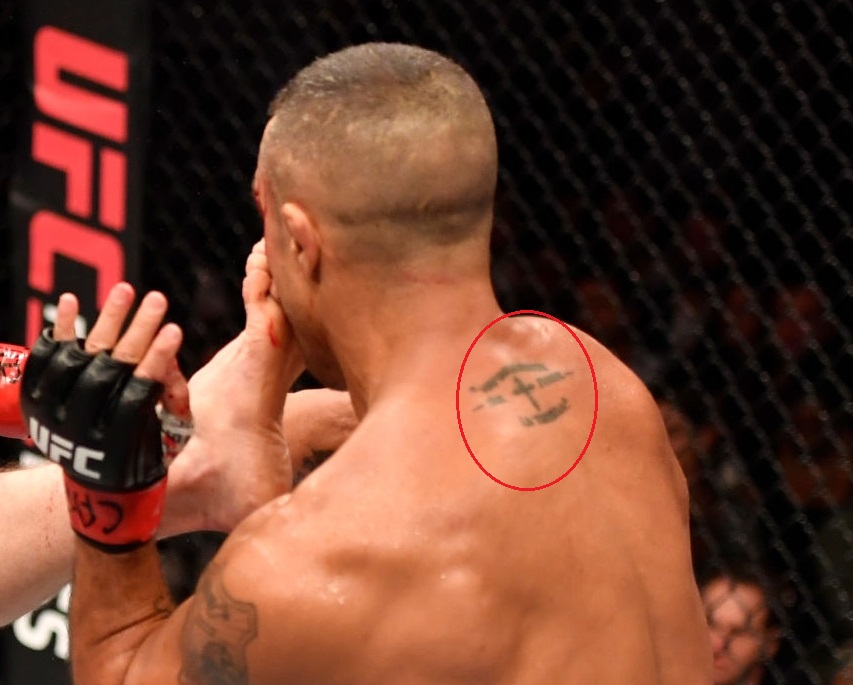 Tattoo: The back of the champion’s neck is inked with another tattoo of a cross along with some prayer inked on it. 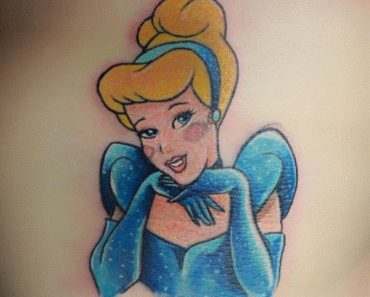 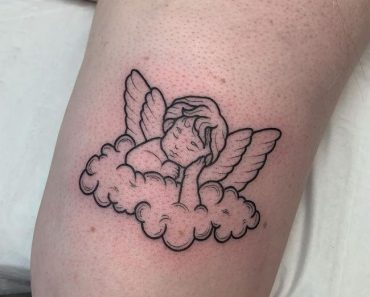 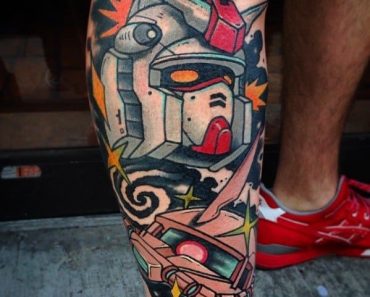