Jennifer Lynn Farley, popularly known as ‘JWoww’ is an American actress and television personality who came into the limelight because of her appearance on the MTV reality show ‘Jersey Shore’. She has got some beautiful tattoos on her body and each tattoo has a specific meaning. Let’s have a look! 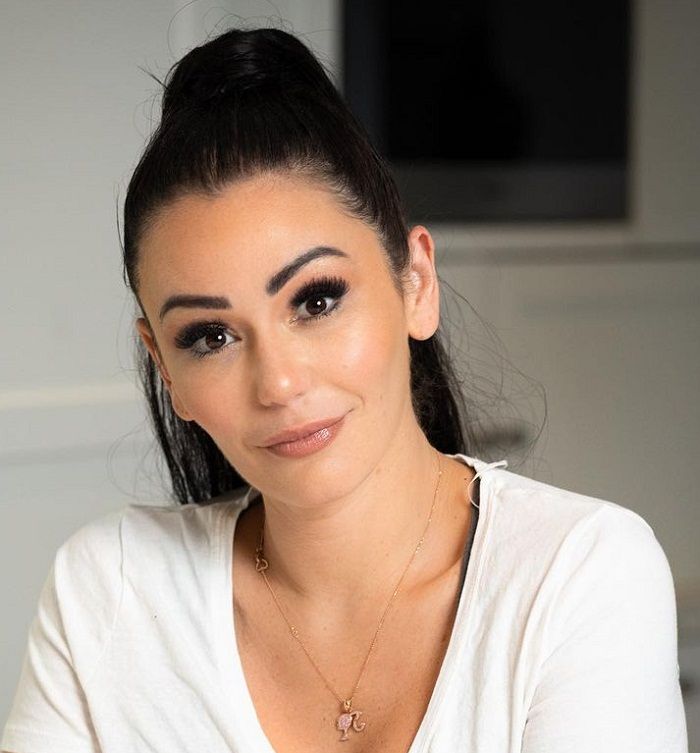 Meaning: This is the first tattoo that JWoww got inked at a house party when she was just 15. However, her dad got furious and asked her to get it removed. The procedure was a very painful experience for her. Later, her dad agreed to get the tattoo covered-up on her 18th birthday. In an interview, she said,

My first tattoo I actually got when I was 15 at a house party and it was actually done by a professional tattoo artist. How fun in the kitchen with nothing sterile. I’m so glad I didn’t get hepatitis and I decided to get this crazy fire flame on my ankle. Later, I and my family went to Disney because I’m so obsessed with Disney and we’re sitting at our Disney pool and my dad goes what this is on your ankle. I was Oh yeah by the way I got that at a house party about six months ago. Dad is super mad angry says when we get back from Disney you are getting it removed. And this is old school this is over 15 years ago where it literally looks like a blow torch that they take to your ankle. My ankle swelled up and I was screaming, crying, and I kicked the doctor. My dad felt really very bad that the tattoo became completely deformed. So he said on your 18th birthday you can get a cover-up. So on my 18th birthday, my grandfather passed so I got a rose with angel wings and OPA which is a German for grandfather which is what I called him and that was my first professional tattoo and then I became addicted.” 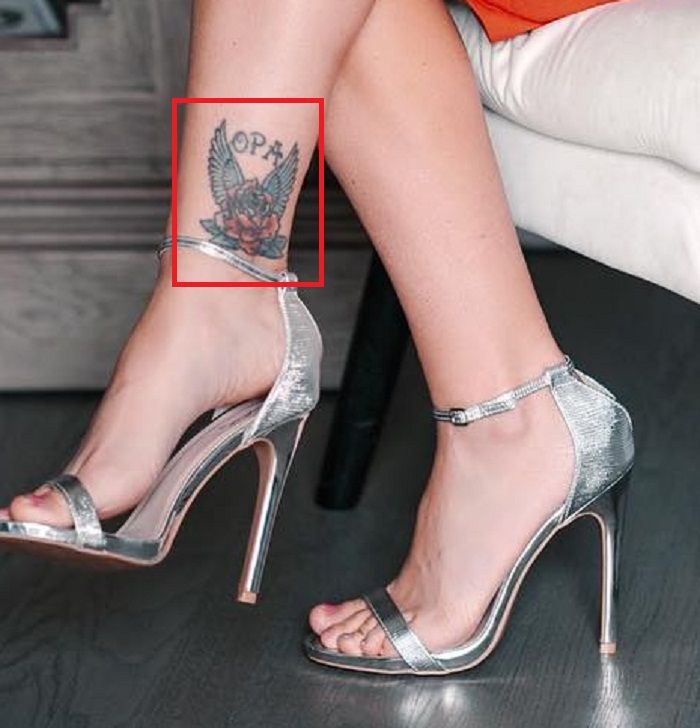 Tattoo: ‘Rose with Angel Wings’ tattoo near his right ankle.

Meaning: This was the cover-up tattoo for the ‘fire flame’ tattoo which she got inked at the age of 15. This tattoo is a tribute to her grandfather who passed away on her 18th birthday. In an interview, she said,

So on my 18th birthday, my grandfather passed so I got a rose with angel wings and OPA which is a German for grandfather which is what I called him and that was my first professional tattoo and then I became addicted.” 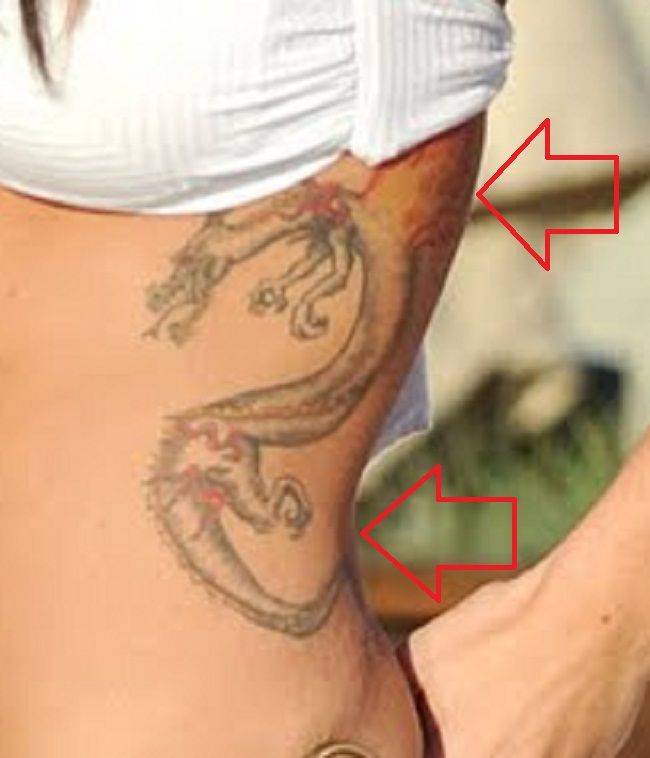 Meaning: Jennifer got this tattoo inked during her college days by a college advisor. In an interview, she said, 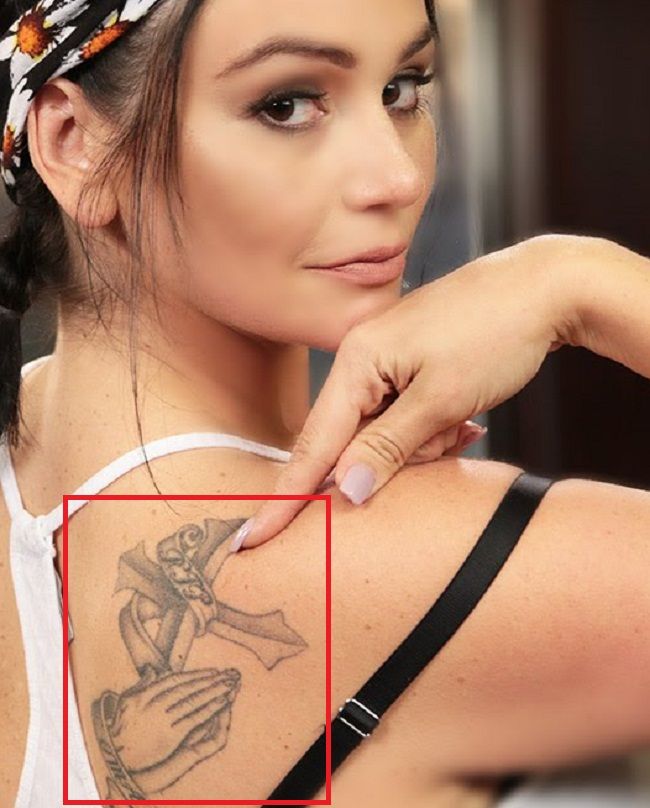 Tattoo: ‘Cross with Praying Hands’ tattoo on her back.

Meaning: Jennifer got this tattoo inked by an Italian artist in Itlay while shooting for season 4 of Jersey Shore. She got ‘cross with a RIP written on it and praying hands with ‘OMA’ written on it to pay a tribute to her grandmother. She said,

The guy didn’t speak English, and I don’t speak Italian. It was very interesting to try and tell him how to put this on my back.” 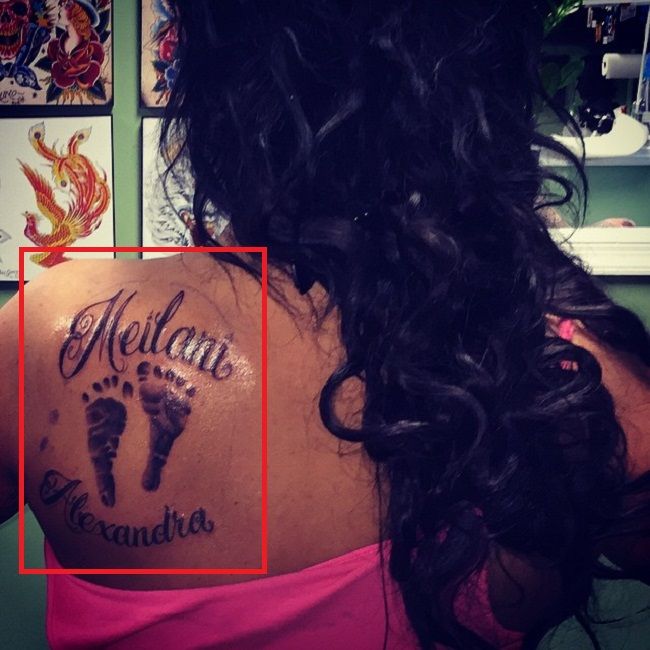 Tattoo: ‘Footprints’ tattoo on her back.

Meaning: In November 2014, Jennifer and her ex-husband, Roger Mathews, got the matching ‘footprints’ tattoos inked for their daughter, Meilani who was born on July 13, 2014. She uploaded the picture of her tattoo on her Instagram handle on November 23, 2014, with the caption, 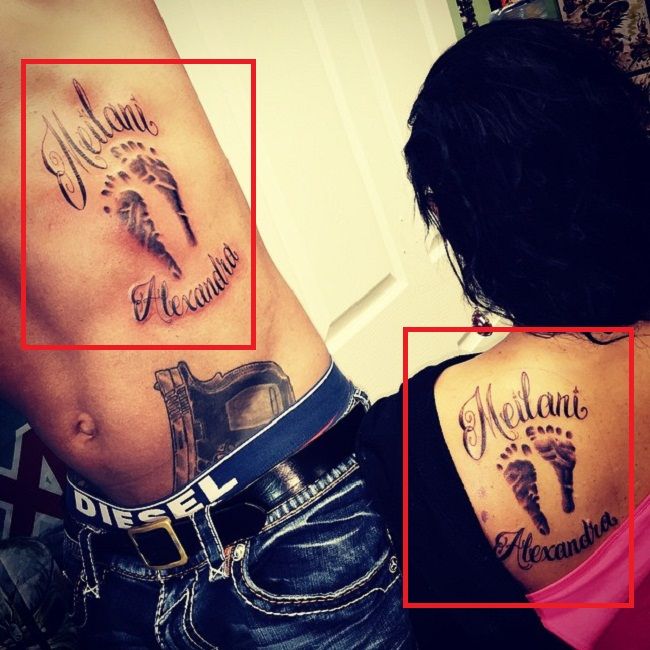 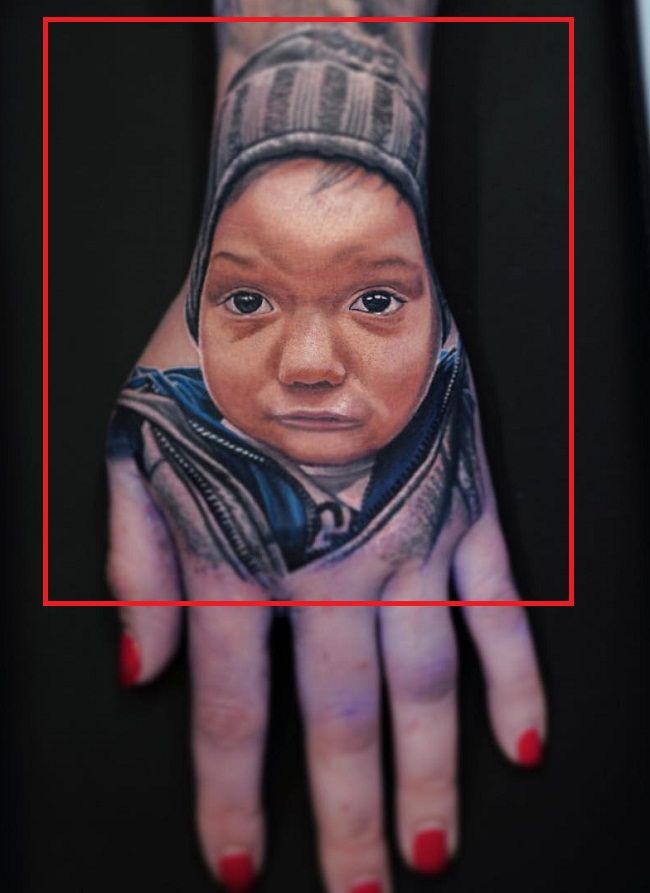 Tattoo: ‘Portrait of Son’ tattoo on her left hand.

Meaning: In March 2019, Jennifer got the tattoo of her son, Greyson, inked on her left hand by the tattoo artist, Nikko Hurtado. On March 30, 2019, Nikko uploaded the picture of this tattoo on his Instagram handle, with the caption,

Like if you would get your kids face on you? I would. Really happy to have tattooed @jwoww cannot wait to finish this piece. Thanks for being such a tough cookie. 🙏🏼 you are awesome! Block in of her sons portrait on her hand. It’s a little swollen.” 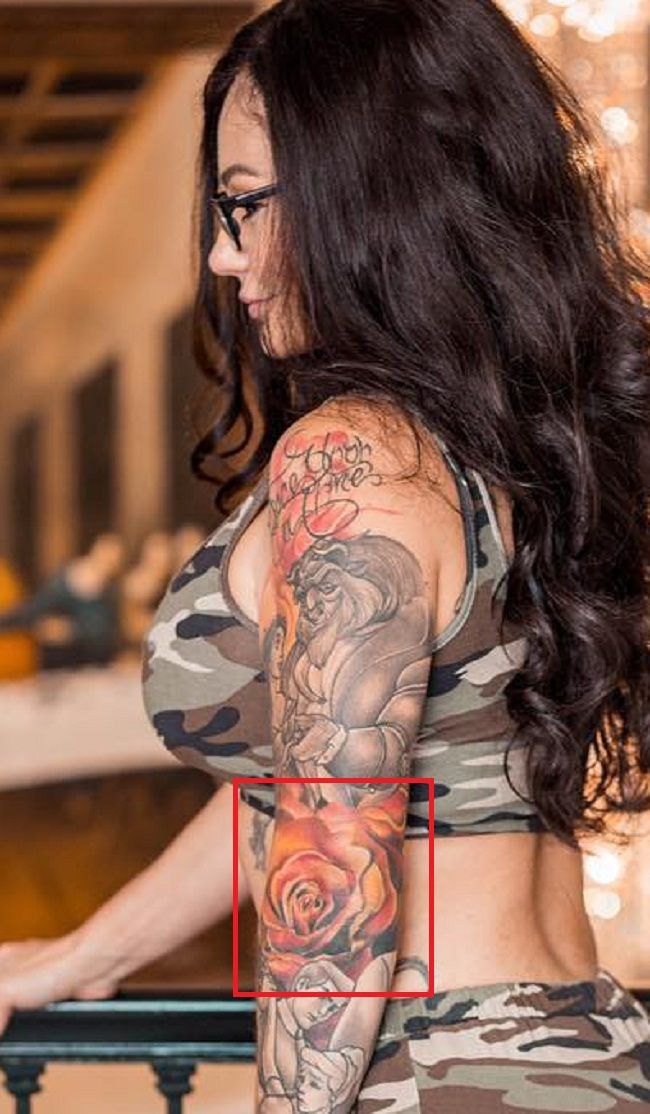 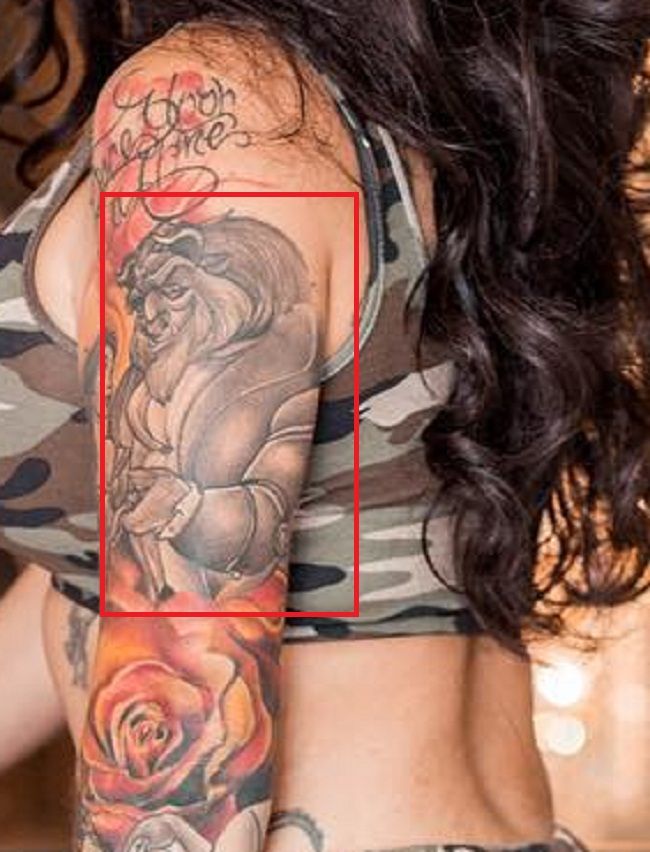 Tattoo: ‘Beauty and Beast’ tattoo on her left arm.

Meaning: Jennifer got the tattoo of ‘Beauty and Beast’ from an American animated movie, ‘Beauty and the Beast’. 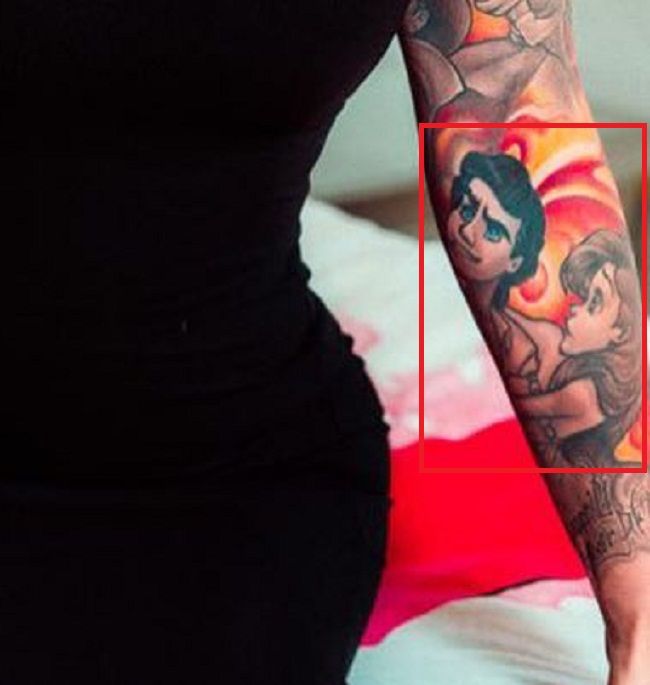 Tattoo: ‘Ariel and Eric’ tattoo on her left forearm.

Meaning: Jennifer got the tattoo of ‘Ariel and Eric’ from an American television animated series, ‘The Little Mermaid’. 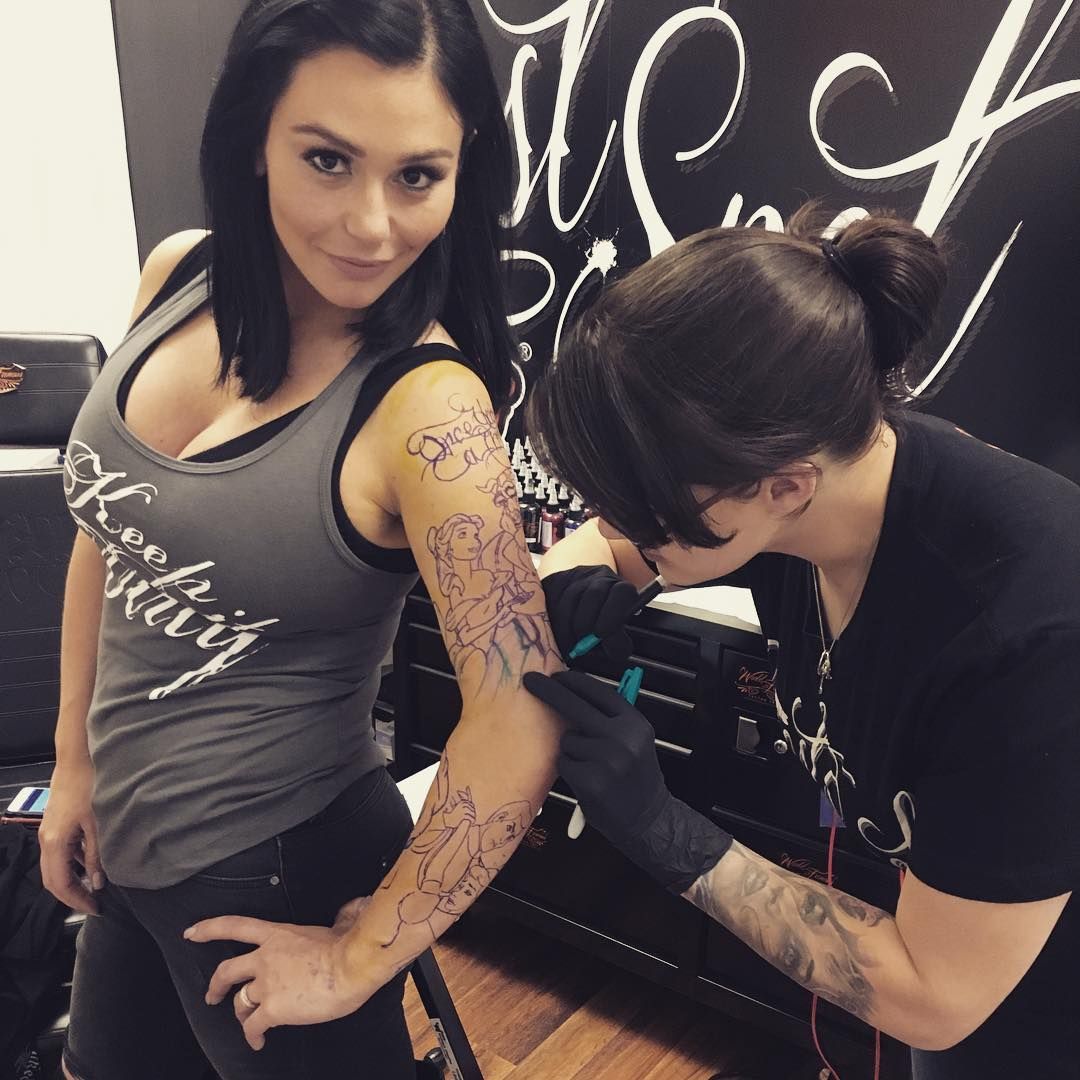 Jennifer Lynn Farley (JWoww) getting the tattoo of ‘Disney Characters’ inked by the tattoo artist, Sarah Miller, on July 07, 2016

10. ‘Cinderella and Prince Charming’ tattoo on her left forearm 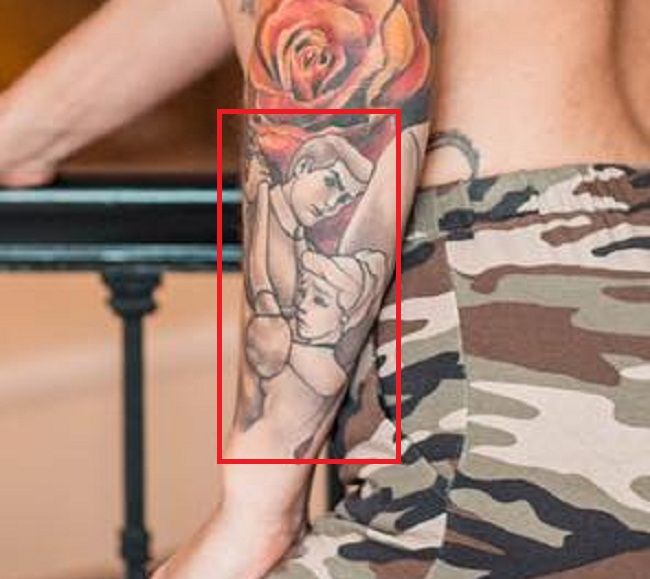 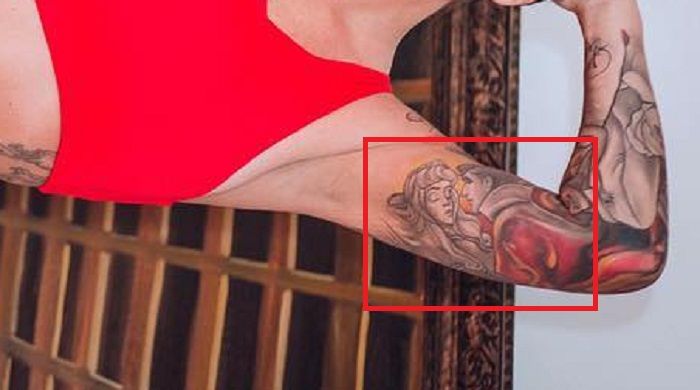 Tattoo: ‘Sleeping Beauty and Prince’ tattoo on her left arm.

Meaning: Jennifer Lynn got the tattoo of ‘Sleeping beauty and Prince’ from an American animated movie ‘Sleeping Beauty’ released in 1959.

12. ‘Once Upon a Time’ tattoo on her left shoulder 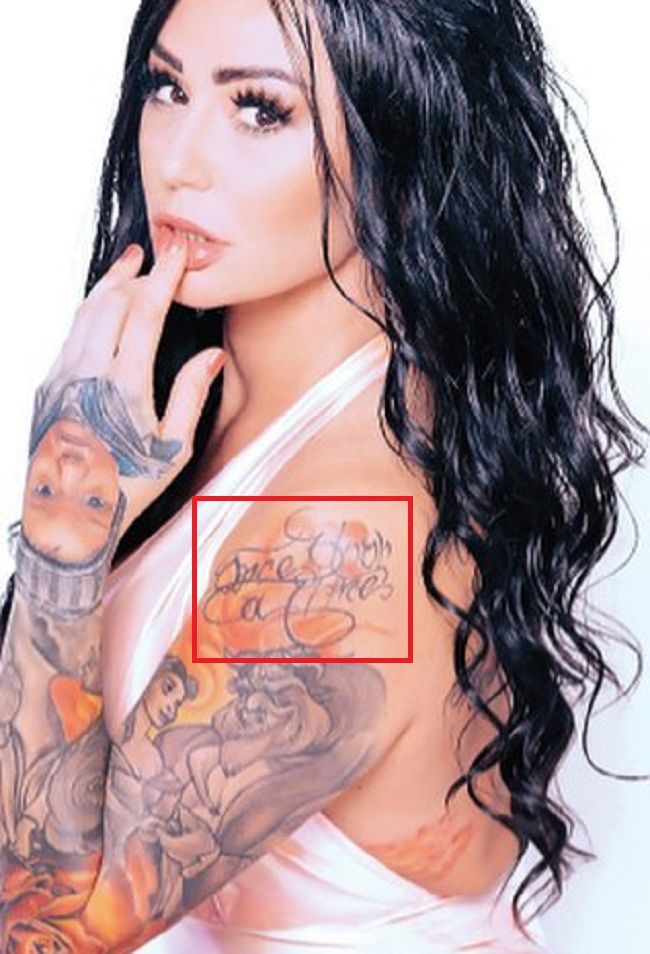 13. Tattoo on her left wrist 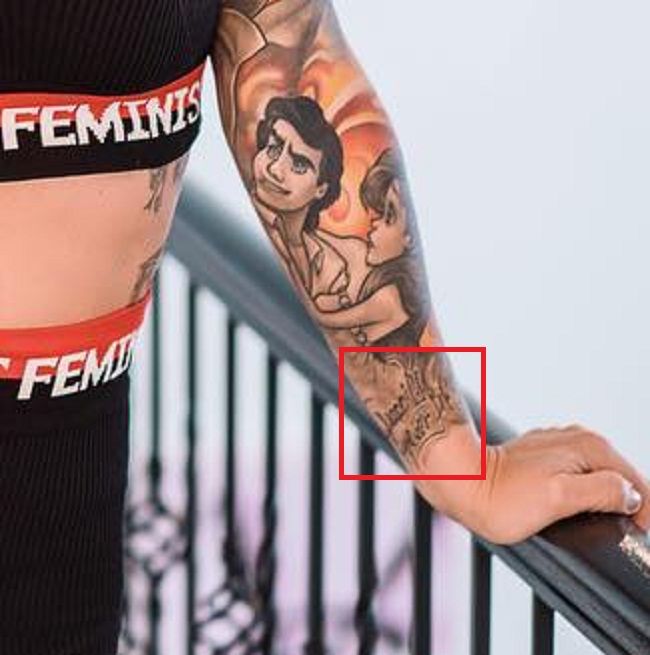 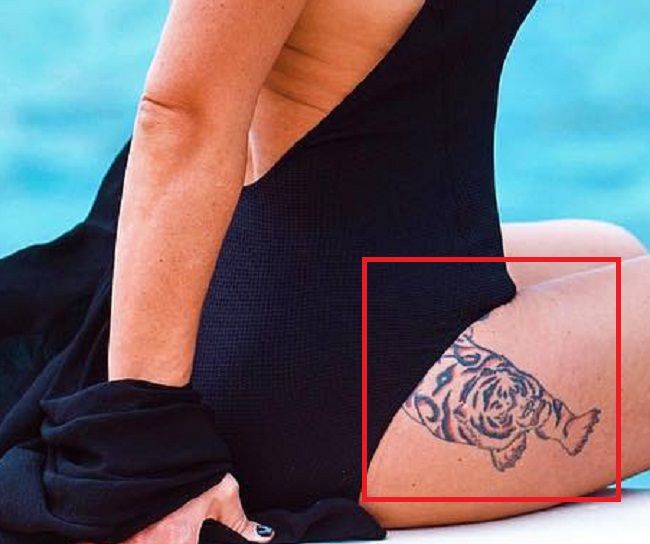 Meaning: Tiger tattoo symbolizes power, strength, dignity, authority, courage, and success. Jennifer got this tattoo removed with the laser treatment in March 2019, by Dr.Kaga. On March 8, 2019, she uploaded the video of her tattoo removal producer on her Instagram handle, with the caption, 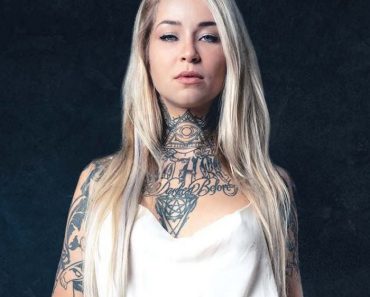