Thomas “Tom” Pestock, better known by his stage name, Baron Corbin is an American professional wrestler and a former professional footballer. He competes in the WWE and is signed with SmackDown under the name, “King Corbin”. King is a tremendous fan of metal and was also named the Most Metal Athlete in 2016. He also received the Most Hated Wrestler title in 2019 by Pro Wrestler Illustrated. Like most wrestlers, Corbin has a lot of tattoos on his body. Let us look at the ones he has and the meanings behind them. Tattoo: There is a tattoo of an arrow, with three banners wrapped around it, tattooed behind Corbin’s left ear. Tattoo: The word, “LOBO” is tattooed vertically behind the right ear of the wrestler.

Meaning: The word, “Lobo” is Spanish for the wolf. The tattoo represents his nickname as well as his wife’s background. While explaining this tattoo, he said, “I got Lobo on the back of my head/ear area and it means “wolf” in Spanish.  My wife is Spanish, and I want my children to speak Spanish, and I am the Lone Wolf in WWE. Corey Graves actually gave me that name.” Tattoo: The entire chest of the wrestler is covered in a large tattoo design of a heart, inside a cage right in the middle of his chest. There is a bird on either side of the cage in blue and red and swirly designs in the shape of wings, on the sides of the cage, covering the rest of his chest. Tattoo: There is a star tattooed on both of Corbin’s shoulders. Tattoo: There is a tattoo of a pocket watch tattooed on his left upper arm. The chain of the watch is wrapped around his upper arm. The clock is showing 3:30 and there is also an hourglass tattooed right below the watch, filled with red sand.

Meaning: There are many clocks tattooed on his body that have been inspired by his career and contain the times when his opponents fell. Tattoo: There is a vulture tattooed on his left arm, right on his elbow. Meaning: The clock tattoos on his bodies have been inspired by his fights and career and contain the times when he won a special match.

Tattoo: The upper side of his left forearm contains another large tattoo of a blue clock with a pendulum suspended from below it in front of an orange background.

Tattoo: There is a tattoo of the number, 13 tattooed inside orange and red lines on the inner side of his left arm, where his elbow folds. Tattoo: The letters, “PLA” merged together are inked on the wrestler’s right bicep. The letters, “RMFD” are tattooed above the three letters, and the letter, “ZMFH” is tattooed below it. Tattoo: The front of his left lower leg contains a large tattoo of the face of a growling wolf. The wolf only has one eye, right in the middle of its head.

Meaning: The wolf tattoo represents his nickname, The Lone Wolf, and is a morphed tattoo of a Cyclops Wolf with only one eye.

Tattoo: The inner side of his left knee contains a tattoo of a large red eye on it. There is also a housefly tattooed near the eye. Tattoo: The rest of his left lower leg contains tattoos of skulls on it that complete his left leg. There is also a tattoo of a broken hand mirror on the outer side of his left leg, but instead of a handle, the mirror contains a hook. Tattoo: The right thigh of the wrestler contains two portraits tattooed on it. There is a portrait of an old man, wearing a cap and a middle-aged one, wearing glasses. There are also a few words tattooed at the front of his thigh.

Meaning: The tattoos on his thigh are a tribute to his father, ‘Steven Pestock’, and his grandfather who was a war veteran. They are the men in the portraits on his thigh. Meaning: All the tattoos on his right leg carry the theme of Jack The Ripper on it. Tattoo: There is another tattoo of a few words on the inner side of his right leg, near his ankle. The words read, “I am the agent that decides your Fate”. There are also blood slashes tattooed in between the words.

Meaning: The tattoo carries the theme of Jack The Ripper, just like the rest of his right leg. Tattoo: There is also a tattoo of the body of a mutilated doll on the inner side of his lower right leg. The words, “From Hell” are also tattooed above the doll.

Meaning: The doll also represents a part of his Jack The Ripper theme. While talking about his tattoos, he revealed, “My character rides the line of that darker world and I have a bunch of horror movie tattoos, and Jack the Ripper. I also have a tattoo of a dragon on my thigh and a tree behind my leg”. But these tattoos have not been revealed in any of his photos. 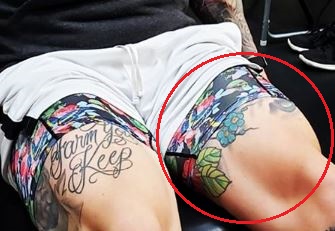 Tattoo: There is a tattoo of a bunch of flowers and leaves on his left thigh.