James Rodríguez is a Colombian professional footballer who is ranked among the best young players in the world. He plays as an attacking midfielder or winger for German club Bayern Munich on loan from Real Madrid, and the Colombia national team. Like all other football players, he has tattoos on his skin which distinguish him from other players while in the field. Let’s explore his inscriptions. 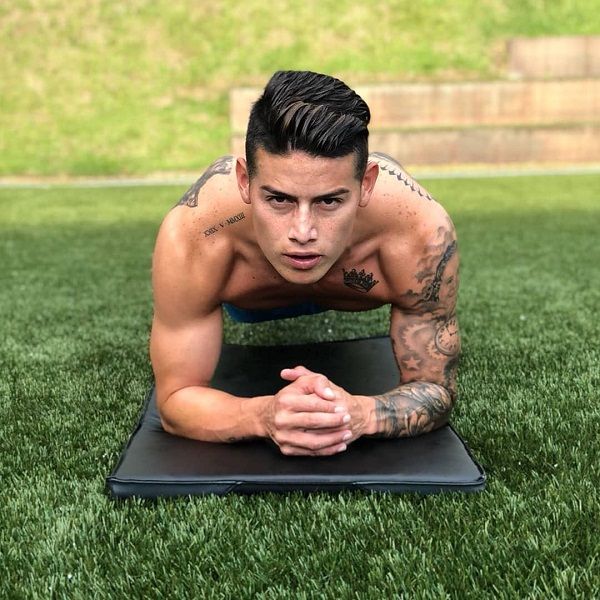 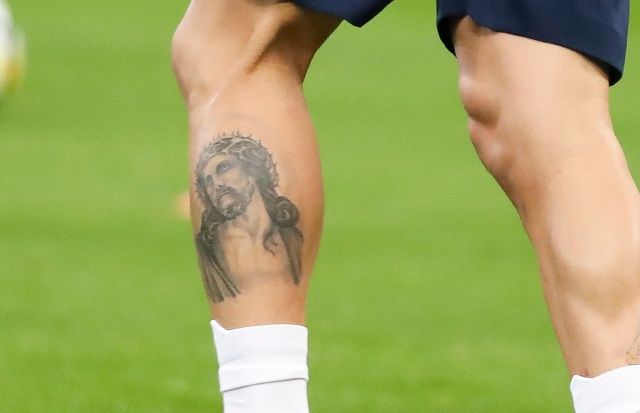 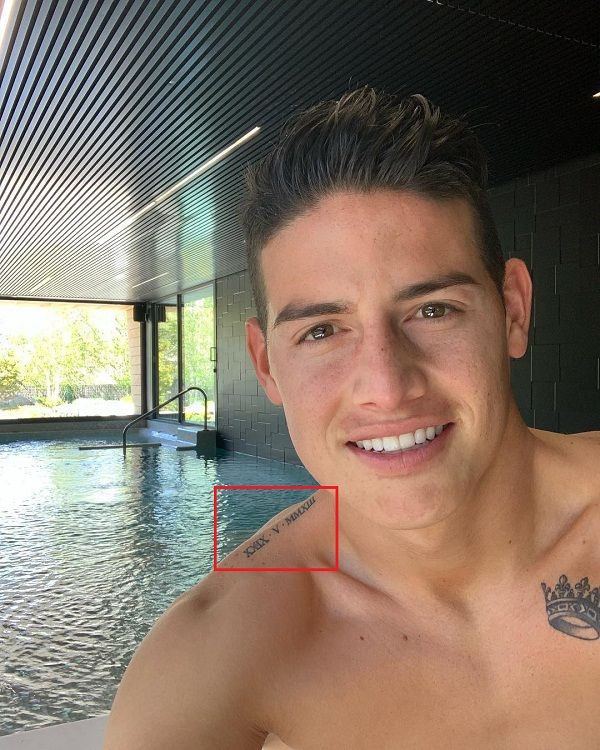 Meaning: James inked the roman numerals on his right collar bone. It is the birthdate of his daughter Salome, i.e. 29-05-2013. 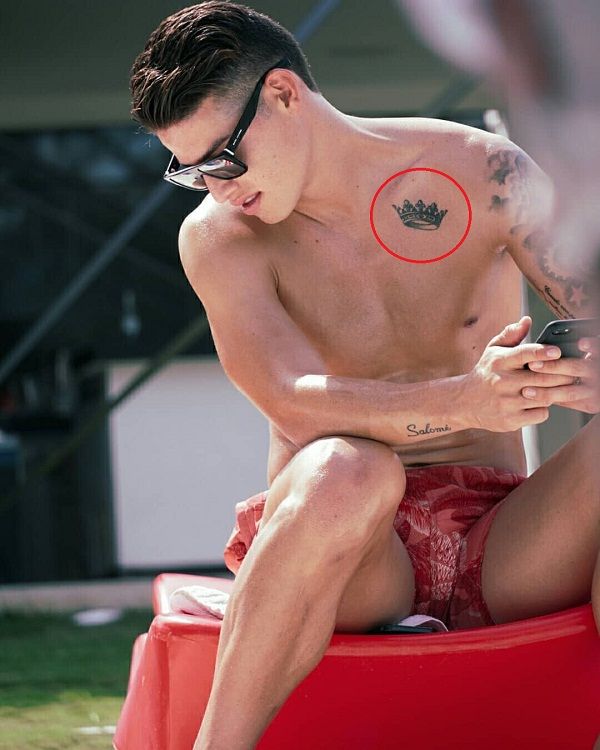 4. “Salome” on his Right Wrist 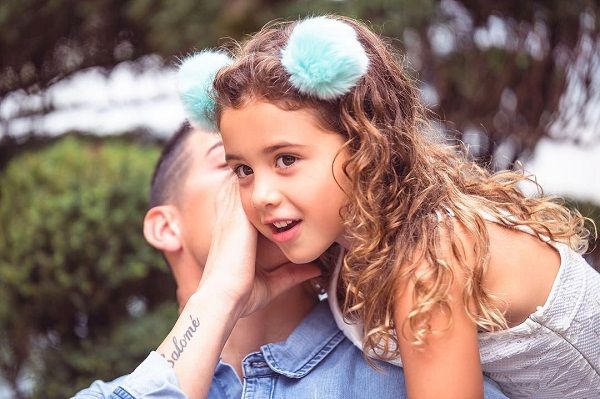 Meaning: James has inked his right wrist with the name Salome in cursive handwriting. It is the name of his daughter.

5. “Pilar, Dani and Juana” On his Right Upper Arm 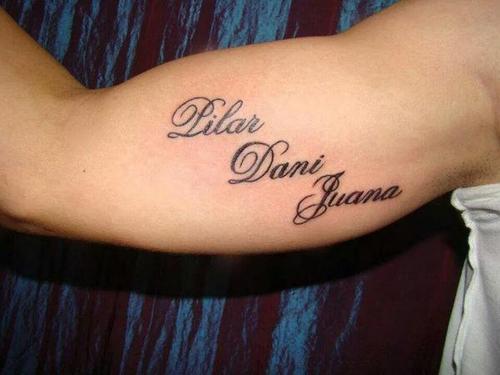 Meaning: James has got three names inscribed on the inner side of his right upper arm. These are the names of the three most important women of his life. Pilar is his mother’s name, Dina (Daniela)is his wife, and Juana is his sister’s name.

6. “Winged Diamond” with a phrase underneath it on his Spine 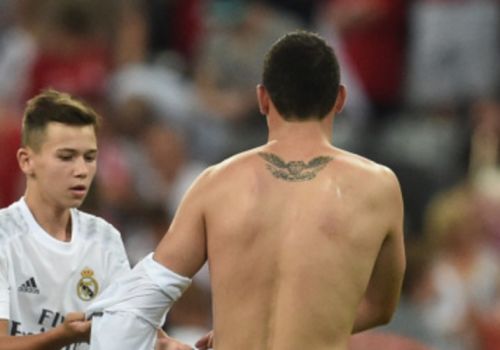 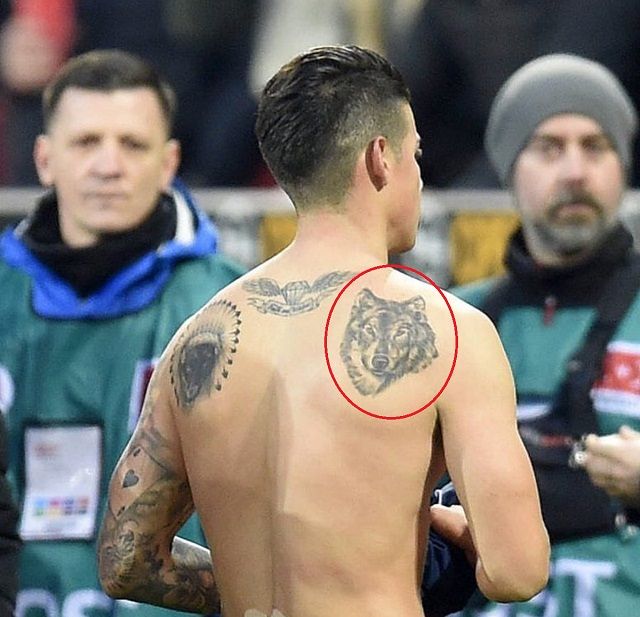 8. “Tribal animal face” on the Left Side of Back 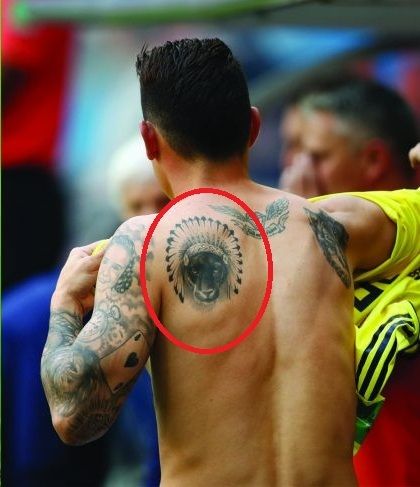 Meaning: James has got an indigenous art inscribed on his left side of the back. It looks like a lion face with tribal feathers hat on it.

9. “Ace of Heart Card” on his Left Upper Arm 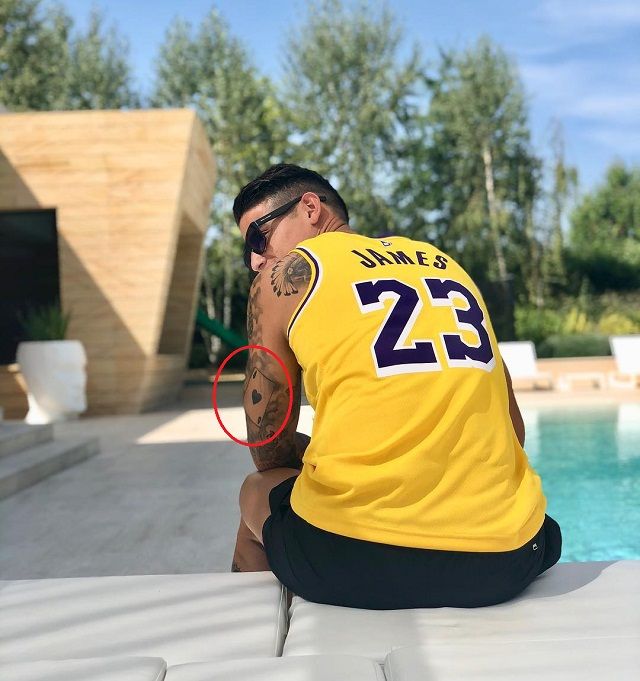 10. Portrait of his Daughter On his Left Shoulder 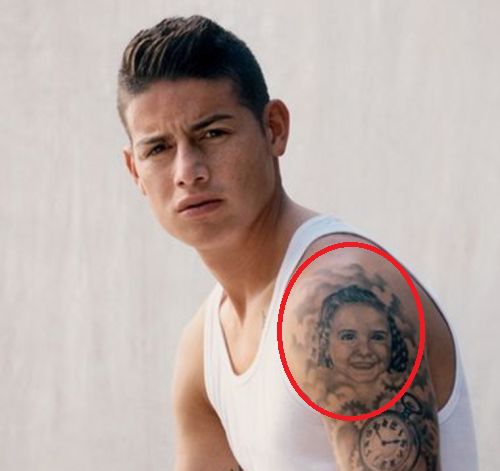 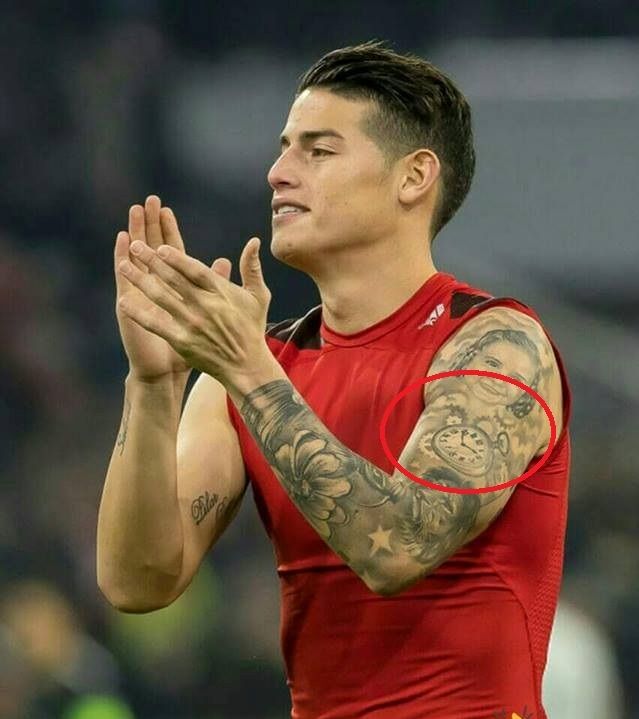 Meaning: James got this classical pocket watch inscribed under the tattoo oh his daughter’s portrait. It is the time birth of his daughter, Salome.

12. “Lion” surrounded by stars on the Left Elbow 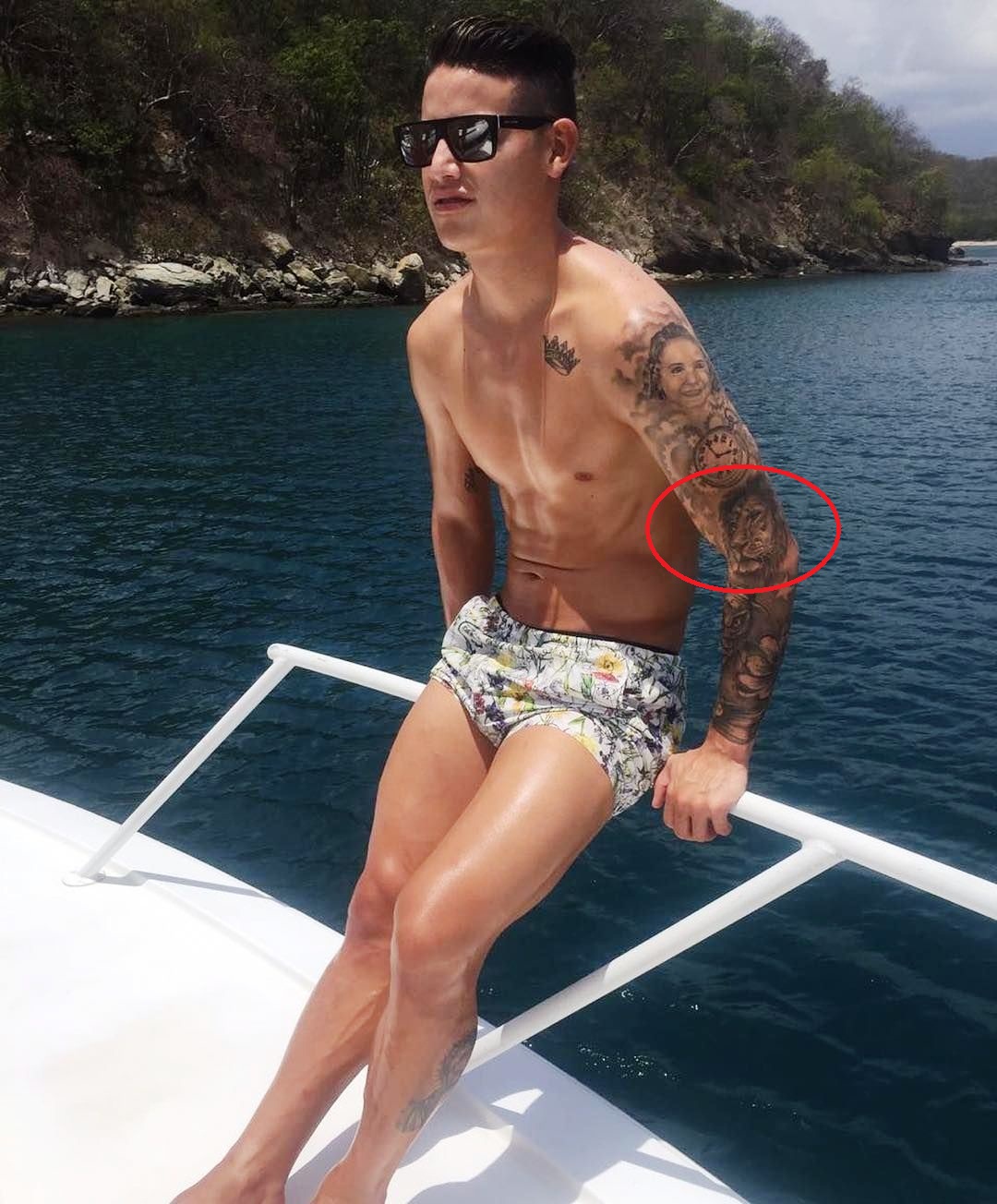 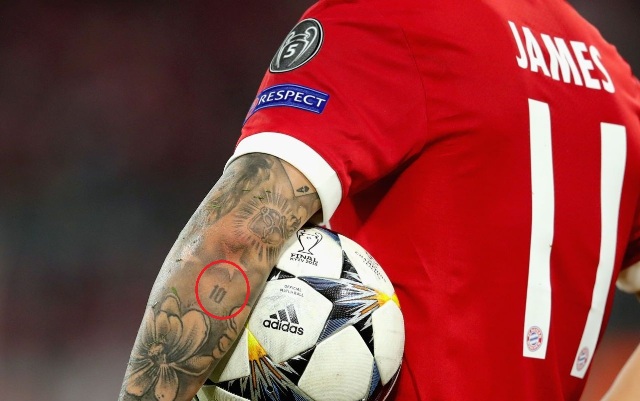 Meaning: James has inscribed numeral left elbow. The number 10 is his jersey’s number. 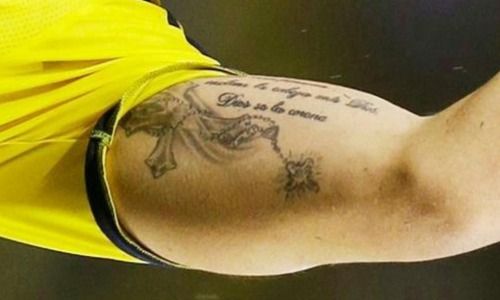 Meaning: James has got a tattoo of Cross with a rosary attached to it. Above this, he inscribed a quote which means, “When a person bows his head before God, God will crown it.”

15. “Koi Fish surrounded by Orchid Flowers” on his Left Forearm 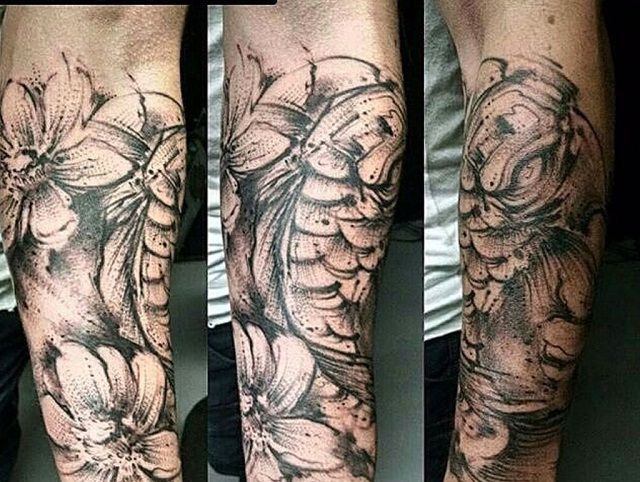 Meaning: James has inked his Left Forearm with the fish named Koi which is a European carp. Orchids and some lotus flowers surround the fish. James Rodriguez is known for his devotion to his beliefs and firm convictions. This tattoo symbolises love, affection, strength and perseverance. An old legend tells that these fish managed to swim against the current and that those who managed to climb the waterfalls became dragons. 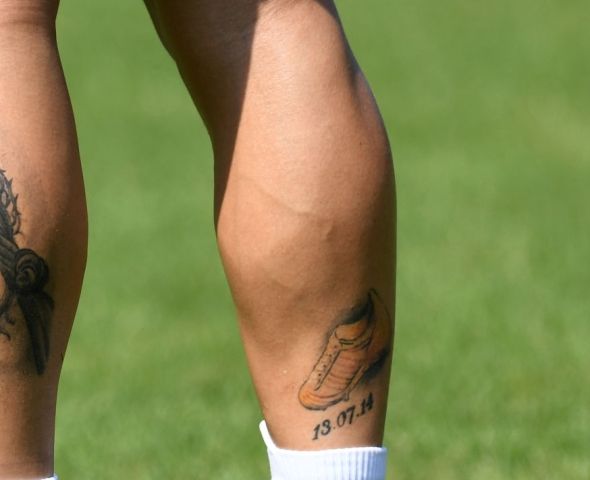 Meaning: James has inked his right calf with golden boot and date, 13-07-14, below the boot. James won the Golden Boot for being the highest goal scorer in the 2014 World Cup. 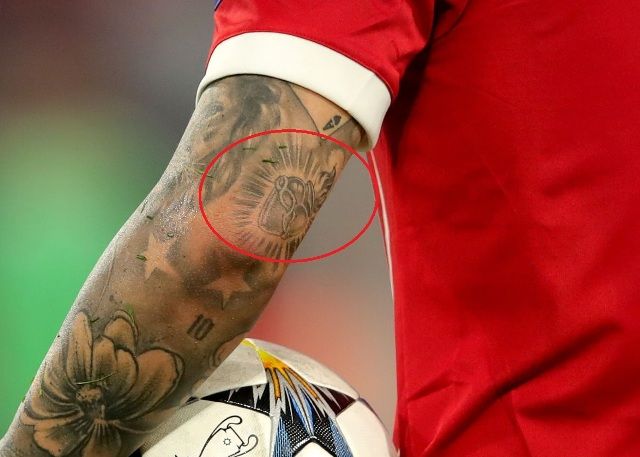 18. Cat Face on his Left Elbow 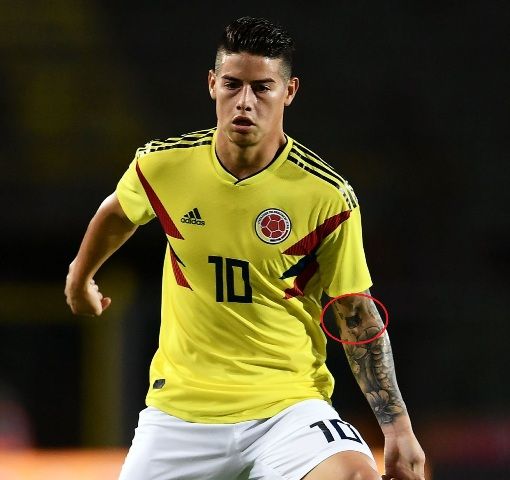 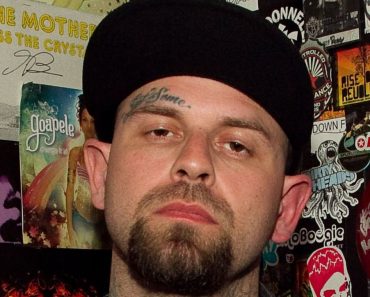 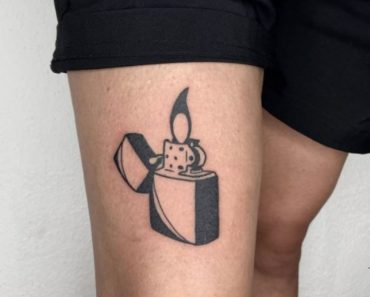