Taylor Curtis Lewan is an American football player who plays in the NFL for the Tennessee Titans as an offensive tackle. He is also a co-host for Bussin’ With The Boys. He played college football for the Michigan Wolverines and was drafted by the Titans in 2014. Taylor has many interesting tattoos all over his body, Let us take a look at his inks and the meanings behind them. 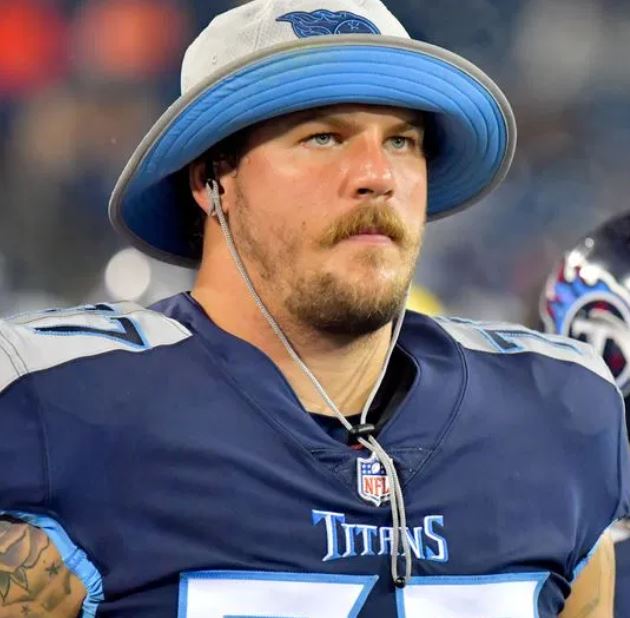 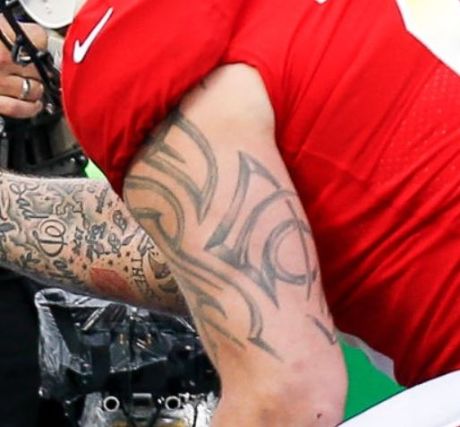 Tattoo: There is a tribal design tattooed on his left upper arm and shoulder. 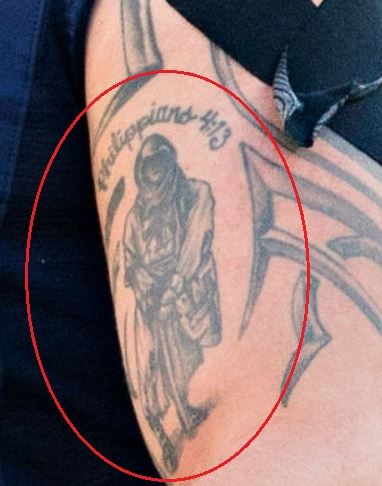 Tattoo: There is also a tattoo of a man dressed in old robes, with his head covered, carrying a walking cane. on Taylor’s left upper arm. The words, “Philippians 4:13” are also tattooed above the man’s head.

Meaning: The tattoo of the man along with the quote is tied to the athlete’s faith. The bible verse above his head says, “I Can Do All Things Through Christ Who Strengthens Me” and this tattoo represents how deep Taylor’s faith goes and how it helps him get through everything in life, with the strength provided by his God. 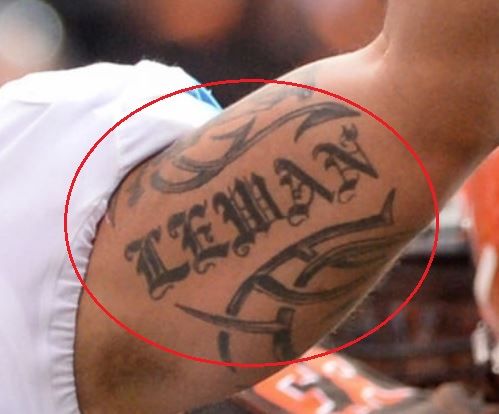 Tattoo: The name, “LEMAN” is tattooed on his left bicep.

Meaning: The idea of the tattoo was to get a tribute tattoo for his family name, “LEWAN” but the letter in the middle is done wrong and looks like an “M”. Reports suggest that Lewan is thinking of getting the tattoo removed or altered with the help of laser treatment. 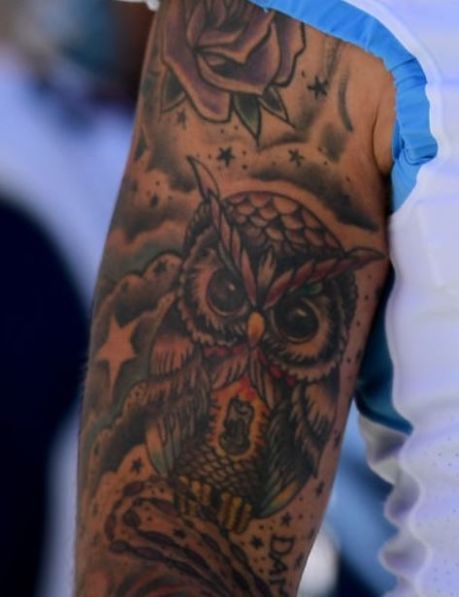 Tattoo: There is a large tattoo of an owl on Taylor’s right upper arm. There is a burning candle that can be seen inside the Owl’s body. There are also two rose flowers tattooed on his right shoulder. The owl also has little as well as big stars behind him to cover the empty spaces on Taylor’s arm. There is also a chain below the owl that reaches down to his forearm and ends with a cross pendant.

Meaning: The owl is commonly known as a symbol of wisdom and knowledge. But it is also known as the protector and guardian of the dead. The owl tattoo here along with the never extinguishing flame represents how the owl is protecting the dying light from going out. The tattoo was done for a loved one. It might be a tribute to Taylor’s grandfather as he has another tattoo on his right arm for him. The owl also serves as a symbol of the protector of his faith since it is guarding the necklace with the cross. 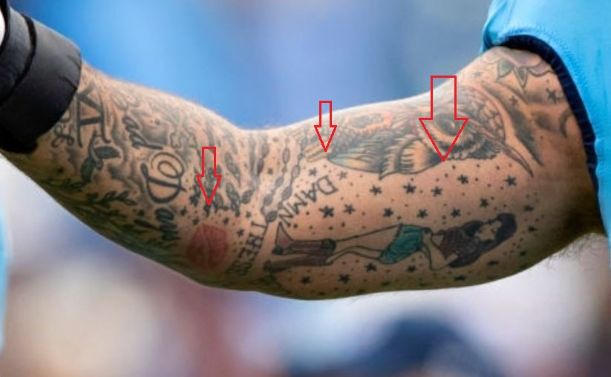 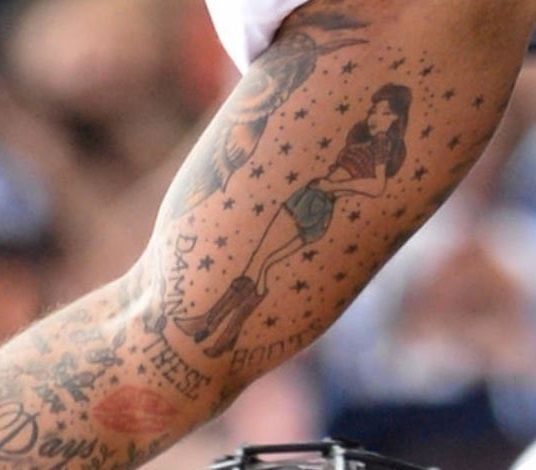 Tattoo: Taylor’s right bicep contains a large tattoo of a pin-up girl on it wearing a flannel shirt, denim shorts, and long boots. The girl is surrounded by stars and dots and has the words, “DAMN THOSE BOOTS” tattooed below her. There is also a tattoo of a red lipstick mark made from a kiss on the inner side of the player’s right forearm. 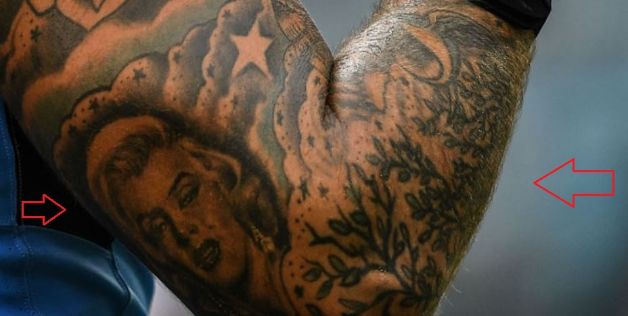 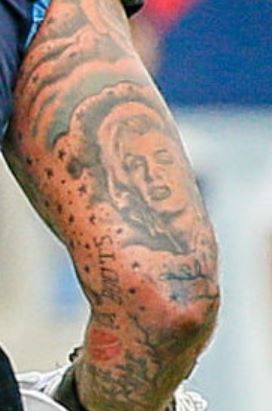 Tattoo: The backside of the player’s right upper arm contains a tattoo of a portrait of a woman’s face on it. There are clouds and stars tattooed behind the woman’s head. The lower side of his right forearm contains a large tree tattooed on it.

Meaning: The portrait on his arm is a portrait of Marilyn Monroe whom he had a crush on since childhood. 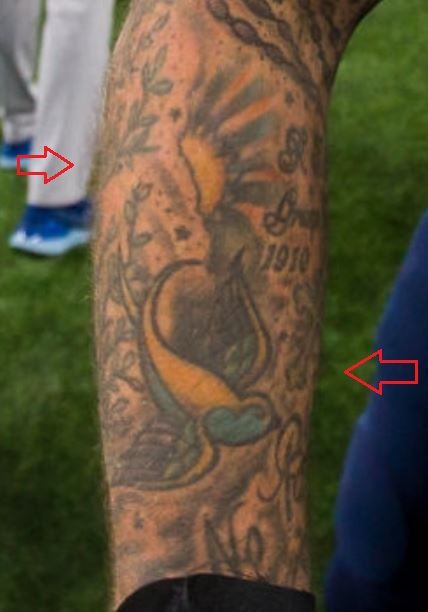 Tattoo: The upper part of the player’s right forearm contains a tattoo of a blue and yellow bird on it. There is also a tattoo of the sun, emerging from behind a cloud and giving out blue rays of shine, a little above the bird. 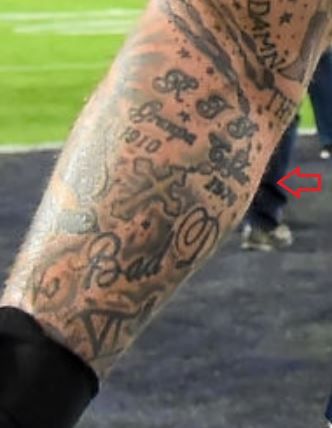 Meaning:  The words RIP is a tribute tattoo for his grandfather. The cross on his arm represents his religious views and is connected to the owl that serves as a guardian and protector of the player’s faith. 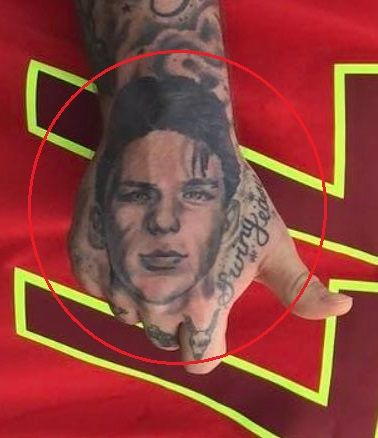 Tattoo: The upper side of the player’s right hand contains a tattoo of the face of a boy on it. The words, “swing east” are also tattooed on his thumb. 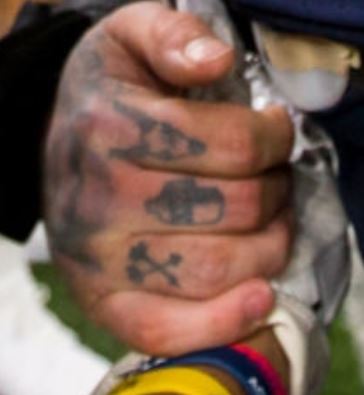 Tattoo: There are little tattoos on Taylor’s right hand’s fingers. There is a skull of a bison on his index finger. A bottle on his middle one and two arrows in the shape of a cross tattooed on his ring finger. 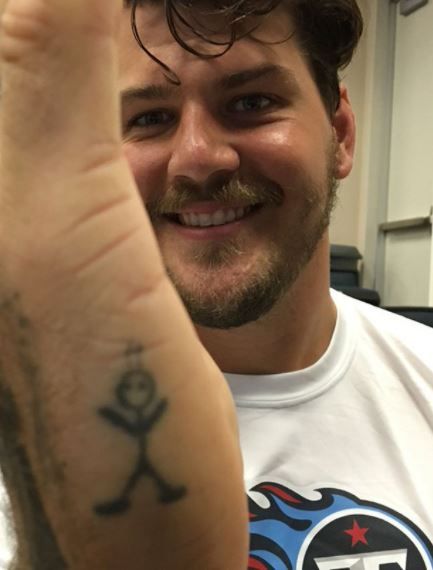 Tattoo: There is a tiny stickman tattooed on the side of Taylor’s right hand with smoke coming out of its head. 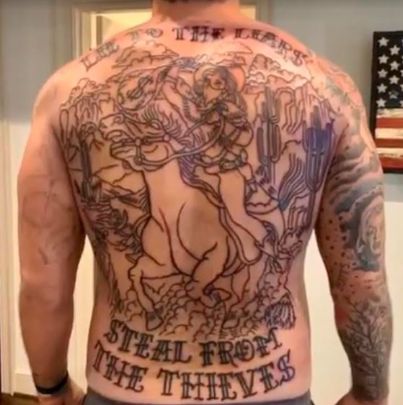 Tattoo: The entire back of the player is covered in a large and special tattoo piece. Taylor’s back contains a tattoo of a cowgirl, riding a horse with a rope in her hand. There are plains shown behind the girl who also has a scarf covering half of her face. There are cacti in her background along with clouds. The entire tattoo design is completed by words tattooed above and below it. The words tattooed above it are, “LIE TO THE LIARS” and the ones tattooed below it are, “STEAL FROM THE THIEVES”

Meaning: The words that go along with his tattoos are by the author, Louis L’Amour who is a famous author, known for his old western novels. 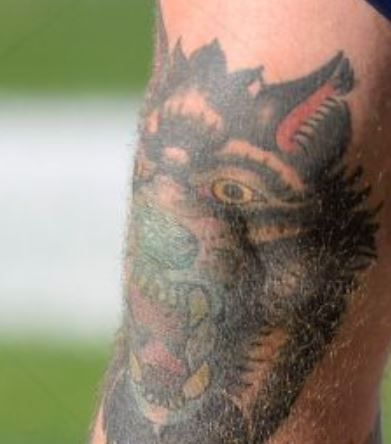 Tattoo: The right knee of the player is covered in a large tattoo of a bear’s head.

Meaning: The tattoo of the bear on his knee represents bravery, sheer power as well as endurance. 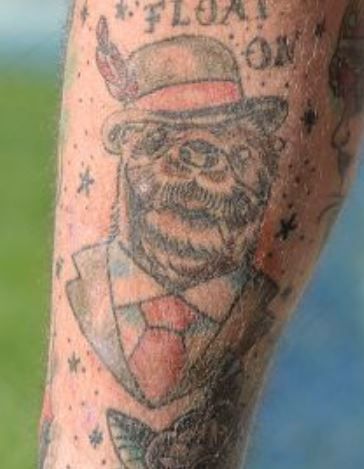 Tattoo: There is a tattoo of a seal wearing a suit and a hat on the front of his right lower leg, just below the bear. The seal also has a cigarette in its mouth and has stars and dots in the background to fill out the empty spaces on his leg. There is also a purple flower tattooed below the seal. 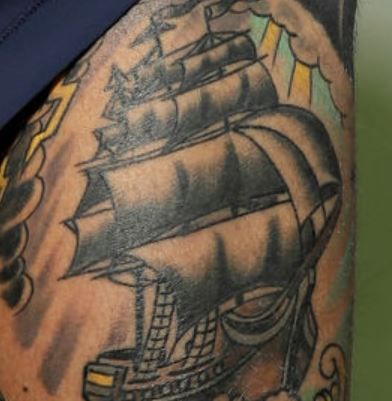 Tattoo: The outer side of his right leg contains a tattoo of a ship on it. The ship is sailing the high tide and dark clouds with lightning can be seen on one side above the ship and rays of shine on the other one.

Meaning: The ship represents a new journey along with bravery. The passing of the ship from a lightning storm to calm sunshine shows the different periods of life and one’s journey through them.

Tattoo: Just below the tattoo of the ship, the side of his right leg also contains a belt of flowers tattooed on it. 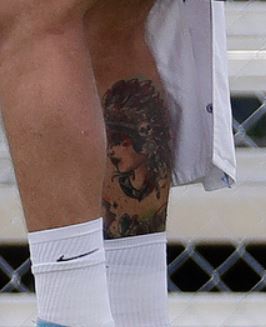 Tattoo: Taylor’s right leg contains another interesting tattoo on it. There is a tattoo of the face of a woman warrior, wearing a large headdress of feathers with little articles like rings and a little skull, dangling from its side. The upper half of the woman’s face is also covered with red lines.

There are a few more tattoos on Taylor’s body that still remain to be fully revealed. There are a few around his left wrist as well as another one near his right ankle. Glimpses of the tattoos can be seen in his interviews or Instagram stories. 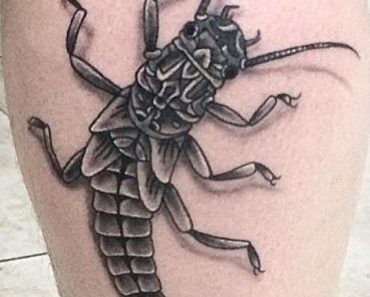